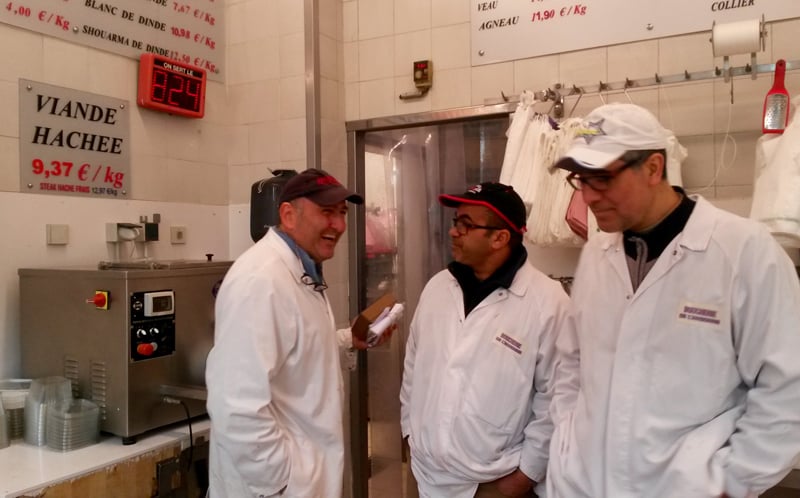 In a city still recovering from last year’s deadly extremist terror attacks, where national news is dotted with reports of anti-Semitism, the store tucked next to an abandoned railroad track offers a more positive face of interfaith relations.

With an estimated 30,000 to 40,000 Jews living in the 19th arrondissement, the district is home to one of the largest Jewish neighborhoods in Europe, according to local Deputy Mayor Mahor Chiche. It also includes a sizable Muslim population that mostly hails from North and sub-Saharan Africa. 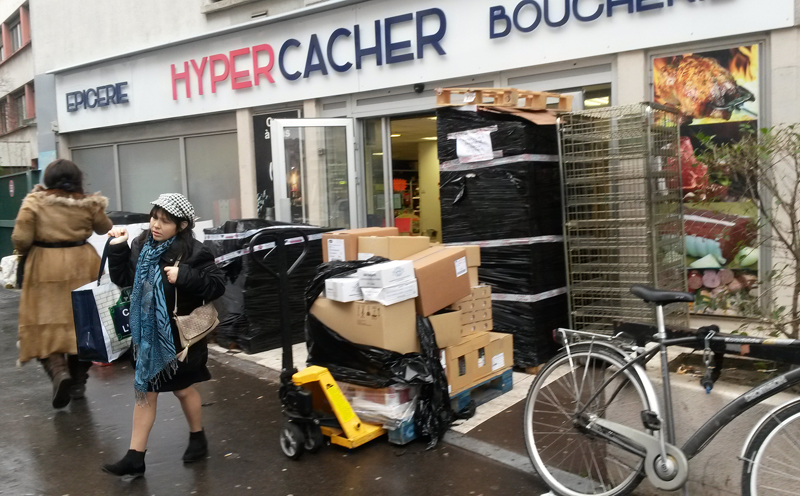 A kosher supermarket in the 19th arrondissement in Paris. Religion News Service photo by Elizabeth Bryant

“There’s a real mix, both socially and religiously,” says Chiche. “The older generation who lived together in Algeria, Tunisia or Morocco, they know each other. They speak Arabic, Hebrew and French. But the younger generation has a harder time getting to know each other. More work needs to be done there.”

Across France, anti-Muslim acts tripled last year from 2014, to nearly 400, while anti-Jewish acts were double that number, according to Interior Ministry statistics.

When a Kurdish teen attacked a Marseille Jewish teacher with a machete last month, some Jews opted to remove their yarmulkes and keep a low profile.

“I remain pretty pessimistic,” says Sammy Ghozlan, who heads the National Bureau of Vigilance Against Anti-Semitism, a French watchdog group near Paris. Like many others, he blames the attacks on young Muslims and, to a lesser degree, the far right.

Those incidents add to a broader, troubling picture of race and religion in France. A new IPSOS survey finds more than two-thirds of French Jews believe anti-Semitism has greatly increased over the past five years. More than one-quarter of all French surveyed said they had personally encountered insults and other problems with Muslims over the past year, according to the report commissioned by the French Judaism Foundation.

The 19th has its own share of problems. The radicalized Muslim brothers Said and Cherif Kouachi, who gunned down a dozen people at the Charlie Hebdo magazine before dying in a hail of police gunfire, grew up in the district. They joined an extremist network known as the Buttes Chaumont gang, named after a neighborhood park about a mile from the Argonne butcher store.

The gang was dismantled a decade ago, and Deputy Mayor Chiche says anti-Semitic acts have abated to about a dozen yearly.

But some experts believe November's Paris attacks have led to a greater understanding among mainstream Jews and Muslims.

Rabbi Michel Serfaty, who heads a Jewish-Muslim friendship association, says Muslim groups are now reaching out to him. “This is new,” he says. “They’re saying they can’t continue living this way, with misunderstandings.”

The Argonne butchery, where a photo of the late Lubavitcher Rabbi Menachem Schneerson is pasted near the cash register, offers another example of relations that work.

A steady stream of customers arrives before closing time. Leontine Duobongo, from the Republic of the Congo, studies the cuts. Raised a Christian, she converted to Judaism a few years ago.

“My boss is Jewish so I became Jewish,” she says.

A native of Sfax, in southern Tunisia, butcher Zribi moved to Paris as a toddler in the 1960s, his family joining the waves of North African Jews leaving their homelands after independence. In the 1980s, his father opened the store, which Zribi helps run with a brother.

The Zribis have installed a prayer room for their Muslim employees. They sometimes lunch together. Conversations are sprinkled with the Arabic from their homelands.

For butcher Mostafa Makhoukh, a Muslim from Oujda, Morocco, the Argonne store where he has worked for 18 years is now “family.”

“Working with Jews isn’t a problem,” agrees another Muslim butcher, Abdel Haq, who also comes from Morocco. “When it comes to religion, each person has his own convictions,” he says.

Zribi lost two Italian friends. Haq, the Muslim butcher, says he lost nobody, but remains shaken by the killings.

“The only lesson I can offer is not to be afraid of the other person,” he says. “If I find myself next to a Jew at a cafe, we’ll talk. We have to go toward the other.”