(RNS) Eager to support a Muslim student’s effort to dispel stereotypes, teachers at a public high school in Rochester, N.Y., last week helped non-Muslim students try on a hijab for a day.

Predictably, there were protests.

The school system received about two dozen calls opposing the activity. Residents, many of them parents, told local news stations that they saw the activity as forcing a religion on students.

While some opponents laced objections with anti-Muslim comments, they were right to question the appropriateness of public school teachers’ appearing to endorse a religious article of clothing. The school system and the school approved the day, and 150 scarves were donated for the occasion.

The intentions of the school, the student, and teachers were beautiful.

RELATED STORY: Indoctrination is not the real issue in public school lessons on Islam (COMMENTARY)

Eman Muthana, a 16-year-old originally from Yemen, wrote a letter to the principal asking if the World of Inquiry School could hold its own version of World Hijab Day on Feb. 5.

Held annually on Feb. 1 since 2013, the observance, created by a Muslim woman in New York City, aims to show non-Muslims what it’s like to wear hijab.

Muthana wrote how she and other Muslim girls endured teasing and almost daily questioning about why they covered their heads.

“This would give people an opportunity to ask us without being embarrassed. This would be a small common thing to do for peace,” she wrote in her request for the activity.

In December, the Muslim Student Association at suburban Chicago’s Vernon Hills High School hosted a “Walk a Mile in Her Hijab” event. Seventeen girls participated, and a half-dozen members of the Muslim group provided scarves and instructions. 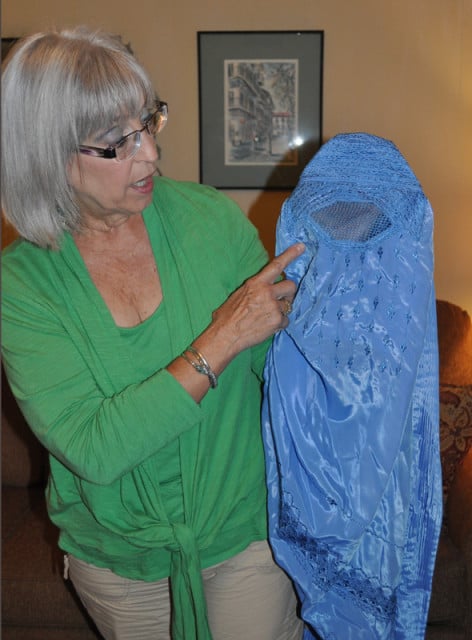 Sharon Peters, a retired world geography teacher from Lumberton, Texas, shows the burka from Afghanistan that led to controversy in her classroom in 2013. Religion News Service photo by Linda K. Wertheimer

The student club ran the activity, not the teachers.

Unfortunately, this was not the case at World of Inquiry, a K through 12 school.

Using religious clothing as part of the lesson plan can be dicey for public school teachers. While researching “Faith Ed.,” my book about schools’ efforts to teach about the world’s religions, I chronicled the heartbreak a Lumberton, Texas, teacher experienced after letting her freshman geography students try on a chador from Iran, a burka from Afghanistan and other clothing commonly worn in Muslim-majority countries.

Sharon Peters, who sewed some of the clothing herself, repeated the lesson for 15 years, but in 2013, a photo of five students wearing the clothing was posted to Facebook. It went viral. Peters faced verbal attacks, particularly for letting a girl try on a burka, which covers the wearer from head to toe.

Opponents, including a few parents, felt the teacher in the tiny southeast Texas town was promoting Islam. Many students signed cards of support for Peters, saying she opened their eyes to cultures around the world.

RELATED STORY: How schools overlook religious harassment and what to do about it (COMMENTARY)

Trying on religious clothing is not an outright violation of that fragile line separating church and state, and it can give students a window into others’ experiences. But such activities also can put students in unnecessarily awkward situations.

Will some non-Muslim students feel obligated to try wearing a hijab because their teachers are promoting the idea?

Will some Muslims object to seeing non-Muslims wear the head covering, given it is not universally blessed by Muslims?

Others believe the dress-up exercise belittles religion. Not all Muslims agree on whether women should wear head coverings. Some have spoken out against wearing the hijab.

Putting on clothing isn’t the same as bowing down to Mecca, said Charles C. Haynes, senior scholar of the First Amendment Center.

Haynes views it as a bad idea, given that the activity not only may upset community members but could be seen as culturally insensitive.

The World of Inquiry School likes experiential approaches, but religion requires special handling. Besides weighing the effect on the religion being represented, teachers also have to consider whether an activity simulates ritual, makes students uncomfortable or creates the appearance of promoting a particular faith. 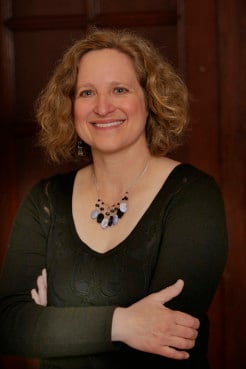 Linda K. Wertheimer, a former education editor of The Boston Globe, is the author of “Faith Ed.: Teaching About Religion in an Age of Intolerance.” Find her @lindakwert on Twitter. Photo by Michael Benabib

Would it have been OK to offer students Sikh turbans or Jewish yarmulkes?

What about asking girls to cover their hair with a wig, hat or scarf as Orthodox Jewish women do?

Teachers, as most do now, should teach about the world’s religions as part of social studies, geography and other relevant subjects. They should emphasize the importance of not judging someone based on faith or religious clothing.

They may show ritual items and clothing, but they shouldn’t ask students to try them on.

(Linda K. Wertheimer, a former education editor of The Boston Globe, is the author of “Faith Ed.: Teaching About Religion in an Age of Intolerance.” Find her @lindakwert on Twitter)