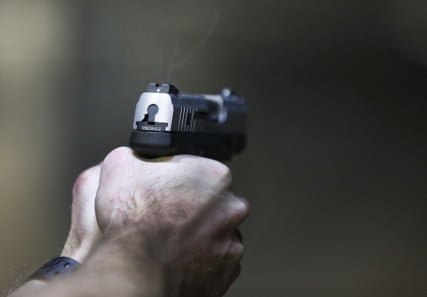 A man fires at a gun range. Civil rights activists are suing an Oklahoma range for refusing to serve a Muslim. REUTERS/George Frey

OKLAHOMA CITY (Reuters) – Two U.S. activist groups filed a federal lawsuit on Wednesday (Feb. 17) against a rural Oklahoma gun range, arguing that it violated civil rights laws by posting a sign that said the business was “Muslim-free” and barring a Muslim from shooting there.

The lawsuit by the Council on American-Islamic Relations Oklahoma Chapter and the American Civil Liberties Union of Oklahoma seeks to have the Save Yourself Survival and Tactical Gear store in Oktaha end what the plaintiffs said is blatant discrimination.

The gun store and range about 120 miles east of Oklahoma City posted a store window sign that reads: “This privately owned business is a Muslim Free establishment.”

It has a posting on its Facebook page saying it will not allow media access or interviews.

The groups filed the lawsuit on behalf of Raja’ee Fatihah, a U.S. Army reservist and investigator for the Oklahoma Department of Human Services, after he said he was kicked out of the range for being a Muslim.

Fatihah told a news conference on Wednesday he visited the gun range to talk with the owners about their fear of the Muslim faith. The owners asked him to leave, he said.

“Shooting is something I do as a hobby, and I also practice to keep up my skills as a reservist. When I went to the range, it went normally until I told them I was Muslim,” said Fatihah.

“The longer we talked, the less willing they were to allow me to use their facilities. Ultimately, they asked me to leave,” he said.

Save Yourself Survival and Tactical Gear store did not respond to requests for comment. It has 20 days to make a formal response to the lawsuit.

A lawyer representing the store said the case is not about religious discrimination, but instead about public safety.

“The law does not require a gun shop or gun range owner — owners of an inherently dangerous business — to equip or train the next jihadist,” said Robert Muise with the American Freedom Law Center.

Brady Henderson, legal director for the ACLU of Oklahoma, said he hoped the lawsuit would set a nationwide precedent against businesses discriminating against any citizens based on faith.

“The Oklahoma case isn’t just about what’s going on in our state, but the nation,” Henderson said at the news conference.