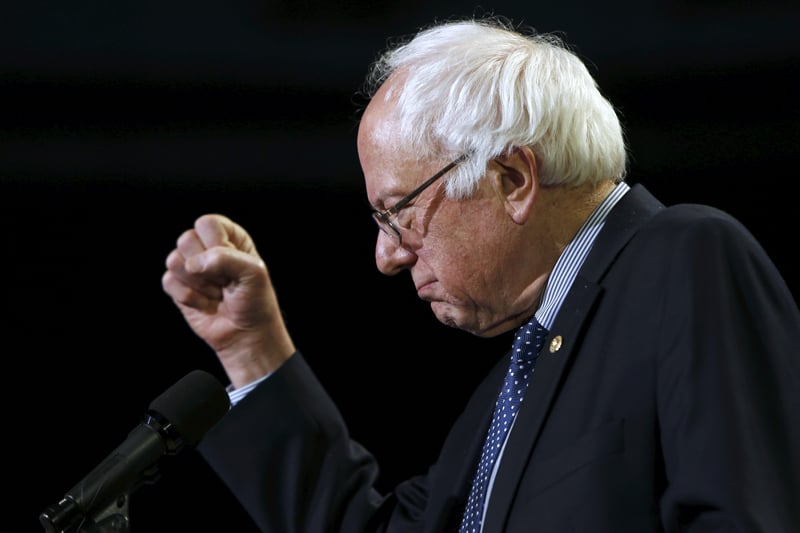 U.S. Democratic presidential candidate Bernie Sanders delivers remarks to supporters at an arena in Greenville, S. C., on Feb. 21, 2016. Photo courtesy of REUTERS/Jonathan Ernst *Editors: This photo may only be republished with RNS-SANDERS-POPE, originally transmitted on Feb. 22, 2016.

(RNS) Democratic presidential candidate Bernie Sanders has been a longtime fan of Pope Francis’ positions on social justice and income inequality, and now he says the pontiff is in fact a socialist — just like himself.

“(W)hat it means to be a socialist, in the sense of what the pope is talking about, what I’m talking about, is to say that we have got to do our best and live our lives in a way that alleviates human suffering, that does not accelerate the disparities of income and wealth,” Sanders tells the Rev. Thomas Rosica, head of the Toronto-based Catholic network Salt and Light in an interview to be broadcast Tuesday evening (Feb. 23).

Rosica, who also works as an English-language attache for the Vatican press office, had asked Sanders if he thought Francis was in fact a socialist, as many of the Argentine-born pope’s conservative critics in the U.S. have claimed. Sanders said yes.

“When (the pope) talks about wealth being used to serve people, not as an end in itself, I agree with that,” Sanders says.

The interview was taped last September on the eve of Francis’ closely watched visit to the U.S., his first ever, but Rosica told RNS that “the timing was right now” to run it. Salt and Light also issued a statement explaining that it was not endorsing Sanders or his views.

Sanders has endured through the early primaries this year as the only threat to Hillary Clinton, the other Democratic candidate, and the warm embrace of Francis by Sanders — a secular Jew — is an intriguing counterpoint to the recent spat between the pope and the leading Republican candidate, Donald Trump, a professed Presbyterian.

But Sanders’ candidacy has also raised questions for Catholics who wonder if they can support a self-proclaimed “Democratic socialist” like Sanders.

In the interview, Sanders again blasts the world’s “massive income wealth inequality” and says that for the rich, greed has become “their own religion, and they make no apologies for it.” He praises Francis for critiquing this “idolatry of money” and the pope’s “very, very radical critique of the hypercapitalist system.”

Sanders’ latest comments are consistent with his previous praise of the pope’s views, though his comments labeling the pope a socialist were a step further than he has gone before — and are most likely beyond anything the pope himself would say.

Francis has said Marxism is wrong, though he has many friends who are Marxists. And speaking to reporters flying with him from Cuba to Washington in September, he rejected the frequent criticism from the right that he is a communist or left-winger.

“I am certain I have never said anything more than what is in the social doctrine of the church,” Francis said. “I follow the church and in this I do not think I am wrong.

“Maybe I have given an impression of being a little bit to the left,” the pope conceded. “But if they want me to recite the creed, I can!”

A greater concern to many Catholic voters in the U.S. may be the fact that Sanders is a strong supporter of abortion rights and gay rights.

Questioned by Rosica on his support for abortion rights, in contrast to Francis’ strong opposition, Sanders said “this is an area we just have to disagree.” The same goes for gay marriage, he said.

“(T)he best that I can say on those issues is let’s respect each other when we disagree, and let’s work together on those areas that we do agree on,” he said.

Sanders also cautioned many of his own liberal supporters who he said are “not quite comfortable with the church” because of the teachings on abortion and marriage, for example.

His own approach, he said, “has been that I will be very clear about my disagreements with the (Catholic) Church, but I think that the pope is playing an historical role coming at exactly the right moment in human history, where his voice is having a profound impact, not only on our country, but all over the world.”

Consequently, he continued, “I embrace those areas, and I embrace very strongly, those areas where we agree. And again, it’s not just, oh, isn’t it important to talk about the poor, and the homeless, and the unemployed.

“Yeah it is, but he goes deeper than that. And he talks about how we should not simply be spending our lives trying to make more and more money, and turning our backs on those people most in need, and that strikes me very deeply,” the candidate said.

Sanders noted in particular his common cause with the pope on battling climate change. In the interview, he also strongly endorses religious liberty, an issue on which the GOP candidates say the Democrats are weak.