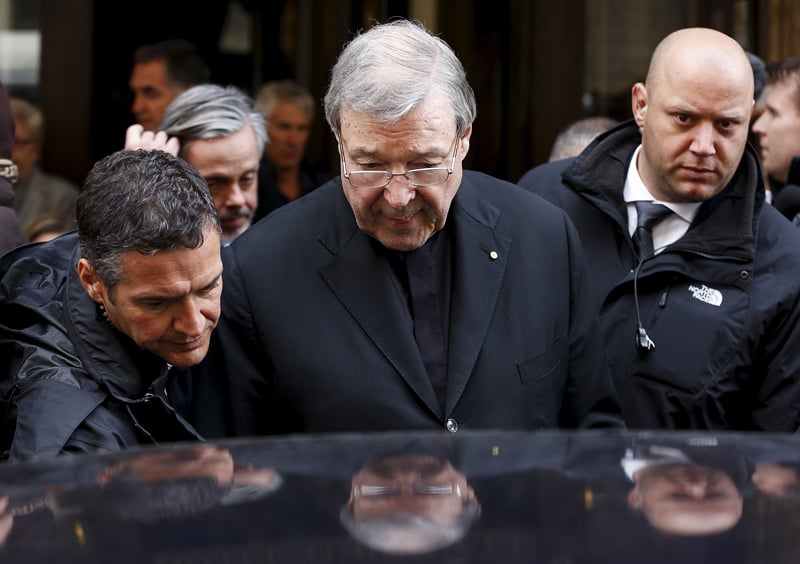 Australian Cardinal George Pell leaves at the end of a meeting with the victims of sex abuse, at the Quirinale hotel in Rome, on March 3, 2016. REUTERS/Alessandro Bianchi
*Editors: This photo may only be republished with RNS-PELL-ABUSE, originally transmitted on March 3, 2016.

ROME (RNS) Hours after testifying that he once ignored a child’s warning of molestation at a Catholic school, Australian Cardinal George Pell held an “honest and occasionally emotional” meeting with victims of clergy sex abuse who had traveled to watch the senior Vatican official appear before a landmark inquiry.

“I am committed to working with these people from Ballarat and surrounding areas,” Pell said on Thursday (March 3), referring to the heavily Catholic area where he worked as a priest in the 1960s and ’70s, when critics say he must have known about widespread abuse in the church there.

“I know many of their families and I know the goodness of so many people in Catholic Ballarat: a goodness which is not extinguished by the evil that was done,” said Pell, Pope Francis’ senior adviser on Vatican finances who had for years been a leading churchman in Australia.

Pell read the statement to reporters outside the Rome hotel where he had spent four days giving testimony via video link to a royal commission back in Australia investigating the sexual abuse of children throughout society.

Though Pell did not apologize directly in his Thursday statement for failing to act on reports of abuse he heard about back then, some of the dozen victims who met with him for two hours — longer than the 30 minutes set aside — seemed satisfied with the talks.

“We talked about what the future’s going to be for our survivors and how the church is going to help with that, from George’s level down,” said Phil Nagle.

Nagle said the meeting included discussions about compensation and care for victims.

Thursday’s encounter between Pell and the victims was a remarkably amicable coda to what had been days of tense and often contentious testimony by Pell and criticism from victims.

Pell began his last session of testimony to Australia’s royal commission late Wednesday night in Rome to allow for the time difference with Australia, and he concluded it close to 3 a.m. Rome time.

The 74-year-old cardinal said a heart condition prevented him from returning to Australia to testify in person.

In his testimony, Pell admitted that he was told by a child in the 1970s that a teacher at a Christian Brothers school, Edward Dowlan, was “misbehaving with boys.”

Pell said, however, he “didn’t do anything about it” beyond informing the school chaplain.

“I should have done more. People had a different attitude then; there were no specifics about the activity, how serious it was,” Pell said.

“The boy wasn’t asking me to do anything about it, just lamenting and mentioning it. It was quite unspecific,” he added. Pell said he was told the Christian Brothers were looking into the matter. Dowlan was eventually jailed in 2015 on multiple counts of sexual abuse at various schools.

A number of victims who had raised funds to travel from Australia sat and listened intently to the cardinal’s testimony.

Currently serving as the Vatican’s finance chief, Pell is the highest-ranking member of the Holy See to face a commission into the clerical abuse scandals that have rocked the Catholic Church in recent years.

Pell’s testimony, and the hearing’s proximity to the Vatican, has helped put the church’s abuse scandal back in the headlines, along with the best-picture award won on Sunday by the movie “Spotlight,” about The Boston Globe’s investigation of abuse in Boston in 2002.

While Pell was questioned broadly on his knowledge of abuse in Australia, significant time during the final day of his testimony was dedicated to the case of Gerald Ridsdale, a former priest who was convicted of abusing 53 children.

Pell said Wednesday it was a “mistake” to accompany Ridsdale to court in 1993.

“I walked with him following the Christian conviction that it’s an appropriate activity to be kind to prisoners,” he said. The cardinal said that Ridsdale had done much damage to the church, although as a priest “he’d done other good things.”

Pell denied the allegation from Ridsdale’s nephew, David, who told the royal commission last year that Pell had attempted to bribe him into staying silent about the abuse.

Pell said Wednesday it was “implausible” for a number of reasons, including that he was already aware police were speaking to Gerald Ridsdale.

“I was an auxiliary bishop and I had no access to significant resources. … None of my friends would have been open to providing resources for a bribe,” said Pell.

He also sought to clarify his position on the Ridsdale case, after attracting criticism earlier in the week for saying it was a “sad story” that was not of much interest to him during the 1970s.

“I regret the choice of words. … It was badly expressed,” said Pell, a feisty conservative known for pushing back at criticism.

Many of Gerald Ridsdale’s crimes were committed in the Diocese of Ballarat, where evidence has emerged of a number of priests abusing children. Pell said the concentration of molesters there was “a disastrous coincidence” and he criticized the church leadership for choosing to move abusive priests between parishes.

His comments echoed those made on Sunday, when Pell said “enormous mistakes” had been made.

“The church in many places, certainly in Australia, has mucked things up, has made — let people down. I’m not here to defend the indefensible,” he said.

In the final session on Wednesday, Pell described as “baseless” the accusation that he was lying about his knowledge of sexual abuse in order to protect his own reputation.

David Ridsdale said after the testimony — and before meeting with Pell — that the group of Australian abuse survivors had achieved their aim in witnessing Pell’s testimony. “This (abuse) went on for so long and everybody know, everybody knew.

“It’s about time that we address the past and look forward to the future,” he said. “When you face the truth with dignity, you really can achieve so much.”

The group also met with members of the Pontifical Commission for the Protection of Minors, which Francis set up to formulate child protection policies for the entire church, and requested an appointment with the pope.

RELATED STORY: Off with his hat! Why we want to see cardinals punished in the abuse scandal

The pontiff has been receiving daily summaries of Pell’s testimony, although the two did not discuss the matter during a private meeting on Monday, the cardinal said.

Pell’s testimony over four late-night sessions lasted around 19 hours, marking the third time the cardinal has appeared before the royal commission. Australia’s special investigation into child sexual abuse was established in 2013 and has so far made more than 960 referrals to the authorities.