(RNS) We’ve all seen some sad spectacle about the Catholic Church over the past week.

Then on Monday (Feb. 29), Australian Cardinal George Pell testified to before a royal commission that at the time he cared little or nothing about the victims of sex abuse — even as he called such neglect “indefensible.”

On Thursday, Pell now a senior Vatican official in charge of finances, met with Australian abuse victims and pledged to work with them on care and compensation for people who had experienced abuse. 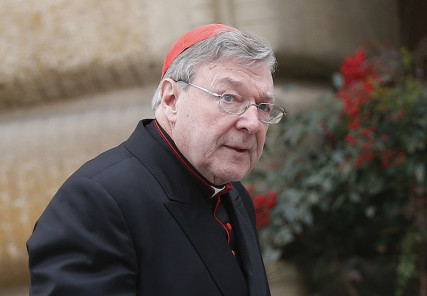 Australian Cardinal George Pell, shown here in 2013, testified in Rome in March, 2016 about overlooking abuse by priests while he was Archbishop in Sydney. REUTERS/Tony Gentile

Between Law and Pell, two princes of the church, we have witnessed decades of churchmen staggering to recognize and apologize for its failure to protect uncountable numbers of victims.

Here and there, a bishop has stepped aside. Just last month, Pope Francis said on his flight home from Mexico that any bishop who moved an abusive priest from one parish to another should resign.

Sadly, that stark comment was lost in the hubbub over his remark on Donald “Not-a-Christian” Trump.

But even if anyone had noticed — is that comment too little, too late?

Forgive me, Lord, but like many outraged by this scandal — Catholic and non-Catholic alike — I still want a perp walk.

You remember the perp walk — accused bad guys led off before cameras. It leapt from TV crime shows to the financial front pages in 2002 when Americans were treated to scenes of humiliated, hand-cuffed Enron top executives facing charges for financial chicanery. Suits in cuffs!

I don’t need to see handcuffs on cardinals but the optical equivalent would work. I want to see someone take Cardinal Pell aside and make him turn in his red cap.

Francis doesn’t need to publicly show this. But a photo of Pell, sans cardinal regalia, toting his own suitcase back to Sydney to face the music there,  would work for me.

The Sydney Morning Herald puts it bluntly: “If Pope Francis wants to retain his reputation as the people’s Pope he must force Cardinal George Pell to either resign or retire.”

Pell hasn’t resigned. Neither did he retire. And anyway, would retirement be good enough? 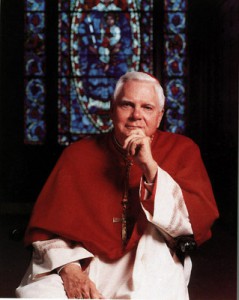 Cardinal Bernard Law was forced to retire as Archbishop of Boston when the abuse scandal exploded there. He moved to prestigious posts in Rome.

Law was forced to resign as archbishop of Boston after his own priests went public calling for him to go. And go he did — to a posting in Rome where, for years, he was assigned to a lovely church to celebrate Mass and serve on a Vatican commission that vets potential new bishops for the pope to select. He lives far from those he harmed.

And there’s the rub.

The Rev. Thomas Reese, an expert on Vatican polity, explained the dilemma: Cardinals are princes of the church and bishops are its nobles. They can’t resign from their spiritual status. But they can resign from their institutional role.

“The minimum we want is for them to stand up and say that they did wrong and they take full personal responsibility and resign. If they did that, I think we can accept that. We might even forgive them,” said Reese.

“But when they fight tooth and nail to stay in their job with all its perks, we are offended,” he said.

“The cardinals wear red because they are willing to die for the church,” said Reese. “They ought to be willing to take a bullet for the good of the church and resign. It’s the closest thing the church has to capital punishment.”

Why do I feel so vengeful about this? And am I alone in this feeling? I suspect not.

It’s human, says criminologist and lawyer Gray Cavender, who co-authored a scholarly paper on the social and emotional dynamics of the “perp walk” in the Enron case.

“We all grew up with movies and novels where the story ends with the bad guy getting shot or arrested,” he said. “We like that. It seems just. They hurt someone and they shouldn’t get away with it.”

“There is a symbolic dimension to punishment. It expresses society’s condemnation of the wrongdoer,” said Cavender, a professor in the department of Justice and Social Inquiry in the School of Social Transformation at Arizona State University.

Cavender is well aware of the decades of abuse within the church. He cited the 1985 expose on victims in Louisiana published by the National Catholic Reporter and the early 1990s when Dallas journalists revealed the church’s failure to remove a pedophile priest, Rudolph Kos.

(The “Spotlight” movie alludes briefly to earlier investigations and then, tragically, to how the Globe, too, had lightly covered the issue and then let it drop for years before turning full force on it in 2002.)

“What makes the Catholic Church’s situation doubly a problem is that it went on for so long and even when exposes were written, it still went on,” Cavender said.

We are angry that leaders of “a powerful institution, one that people revere and love, knew they were hurting people and hid it and lied about it. People are suffering victimization,” he said.

This underlies our applause for the “Spotlight” ensemble’s Oscar night message that this honor be a message all the way to the Vatican.

The Vatican was full of praise for the film, coupled with long lists of all the things the church is now doing to try to right the wrongs. It’s even set up an internal court to examine colluding clerics.

It just hasn’t heard any cases yet.

And too much time has gone by for apologies to be sufficient.

The public is past that. “Saying sorry is not enough,” Cavender said.

“There are harms not reparable by apologies,” he said. “What we want them to do is ‘own it.’ There is a symbolic, communicative aspect to punishment. We need to see it.”