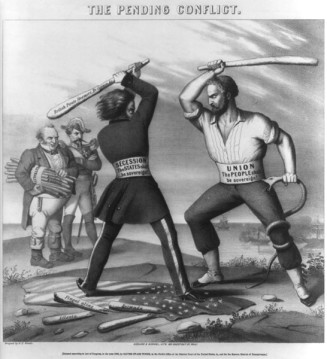 “The Pending Conflict” (1864 version). Albeit more optimistic from the Northern point of view than its earlier counterpart, this version is equally critical of European abetment of the Confederate war effort and of the anti-Lincoln or pacifist movement in the North. The artist has made significant changes in composition and details.

Let’s say that you hold a belief that is not popular or accepted among people who are important to you.

This kind of thing happens all the time. Much of the time it doesn’t amount to a problem. After some discomfort, everyone agrees to disagree, and life goes on.

But sometimes it gets harder than that. It gets harder when you and/or the important others in your life consider the matter about which you disagree to be a matter of high principle or core conviction.

When this becomes the pattern, all parties face several options. You can decide never to talk about the contested issue. You can talk about it in the hope of enhancing mutual understanding even if agreement is impossible. You can (attempt to) agree to disagree, while remaining in relationship. You can sacrifice your conviction to save the relationship. You can continue in your mutual, fruitless efforts to change each other’s convictions. You can escalate the conflict into a state of war. Or, if it is possible to exit, you can end the relationship or face its end from the other side.

Conscientious differences of opinion over religious and moral issues are inevitable. They emerge in marriages, friendships, religious communities, and of course public life. And they can be unbearable.

The Christian tradition contains many exhortations to unity and like-mindedness. These are sometimes interpreted as meaning that believers should always place preservation of unity over the expression of individual conscience. Especially in more hierarchical denominations, this is often linked with church authority — we preserve the unity of the community by submitting to the authoritative pronouncements of pastors, elders, or bishops.

It is interesting that though the New Testament sometimes strikes that kind of note, it is not the only approach to conflict that is offered. Romans 14 contains a fascinating discussion of  intractable differences in Rome over what food Christians are allowed to eat and what calendar to observe. Paul’s solution there is to call all believers to respect the conscientiously held convictions of each other even when they differ, and to trust that the brothers and sisters who disagree with you are doing so in a good faith effort to serve Jesus as Lord. He insists that believers respect each other’s conscience, not harangue each other over different opinions, and remain together in community even as they disagree.

Here one sees something like the birth of the idea of a sacred zone of individual conscience. Paul recognizes the fact that committed Christians sometimes discern truth differently before God. On some (primary) matters, Paul is clear that such differences are not to be accepted. On other (secondary) matters, he is just as clear that such differences must be tolerated, and individual freedom of conscience before God must be protected. (Of course, then we often argue over whether an issue is primary or secondary.)

Both individual conscience and relationships matter. Sometimes one must be sacrificed in favor of the other. But either sacrifice extracts a great price, and the history of humanity, and religion, is littered with the casualties.