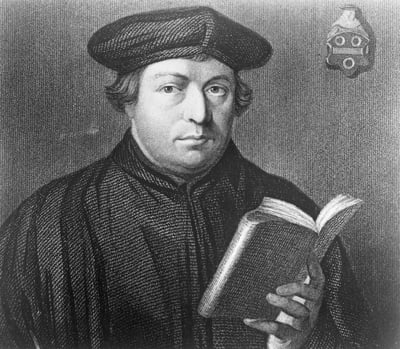 Popes have been interested in heresy and heretics for centuries, and language linking “papacy” and “heresy” continues to prosper down to our own day. The language root of “heresy” connects with “to choose,” and the heretic is someone who, in the eyes of someone else, makes bad choices.

Those of us who are not of the papal obedience, particularly of the Lutheran tribe, will commemorate, this very Wednesday, the condemnation of Martin Luther, called a “heretic” on June 15, 1520. According to best estimates, .0001520% of the world’s Lutherans and even fewer Protestants and other heirs of the Reformation will be aware of this, or will observe the day. Never mind: the date provides us with an excuse to update dealings with the papacy and heretics.

Pope Francis’ sermon at morning mass last Thursday, June 9, departed from tradition. He counseled congregants to seek reconciliation with others instead of confronting them with “take it or leave it” evangelistic styles. Francis invoked authority, as popes tend to do, in this case citing one Jesus, who adopted and exemplified “healthy realism.”

Quote Francis: “It’s not Catholic (to say) “this or nothing.” His judgment: “This is not Catholic, this is heretical.” He counseled instead the “sanctity of negotiations.” More: “Jesus is a great person! He frees us from all our miseries, and also from that idealism which is not Catholic.”

That is not the last word or the only approach to this subject from Pope Francis and, needless to say, Jesus. But it is the overlooked theme in a world of believers who are sure that they are always right and “the other” is always wrong, beyond negotiation, heretical, and worthy of equivalents of excommunication.

Pope Leo X was sure he was right and Luther & Co. were wrong, and the pontiff’s language was not gentle. That pope’s “bull”—which we remind all, is a technical ecclesiastical term, spoke of the young and brassy monk Luther not as a raging bull, but a wild boar who had invaded God’s vineyard, the church.

In case readers have been lulled by the pacific negotiator Francis, it is important to note that, surprise!, the pope is being declared heretical by people whose authority is invested in the internet. Sightings is embedding numbers of links which will give readers a sense of what is being directed against this pope and two of his predecessors.

Leo X found only 41 heresies in the excommunicable Luther, but some Catholic writers and leaders of the far far far right find 101 or more heresies issued from the Throne of Peter during the last three papacies. We could publish some of their language here, but a) we are tender souls, easily offended by such language; b) not Catholic who should keep silence; or c) do not want to deprive readers of an opportunity to enrich their language of vituperation during the war against empathy and negotiation.

Non-Catholics don’t have to worry about suffering excommunication, but they may learn from the positive language and efforts of the Catholics who would plead, as Pope Francis has just done, to resist what the headline calls a “my-way-or-the-highway faith,” here called “heretical.” Many of the heirs of the “wild boars” in the vineyard are enjoying the spirit of Pope Francis, and will cite him in our celebrations on Wednesday, June 15.

September 21, 2020
Related Posts
By Adelle M. Banks
‘High-Church Pentecostal’ leader J. Delano Ellis dies at 75
By Priyadarshini Sen
A Catholic priest takes on interfaith fight against COVID-19 in a sacred Hindu city
By Thomas Reese
Five things Pope Francis should do while imprisoned by the pandemic
By Menachem Wecker
How the Black Plague turned the Shroud of Turin into a beloved relic
By Claire Giangravé
Centenary of John Paul II’s birth highlights continuity with Pope Francis