(RNS) As Democrats gather for the convention in Philadelphia that will formally nominate Hillary Clinton, the party faces an extraordinarily fortuitous set of circumstances: her general election opponent, Republican nominee Donald Trump, finds himself leading a fractious party with too little cash on hand and sky-high negative ratings among key blocs of the electorate.

Women, Latinos and African-Americans are all down on the brash real estate mogul and reality TV star from New York, with Trump’s poll numbers near record lows in some categories.

Yet the most surprising development so far is that for the first time in many presidential election cycles Democrats have a chance to close or perhaps erase the so-called “God gap” — the dynamic that has seen regular worshippers pulling the lever for Republican candidates far more than they do for Democrats.

True, Trump has finally rallied the crucial white evangelical Christian base of the GOP to his side. But he still has outspoken detractors among prominent Christian conservatives and he is viewed with ambivalence and even deep suspicion by many Jewish and Muslim voters and members of other minority faiths.

And it’s not just smaller religious groups: a Pew Research Center survey released this month showed the overall “God gap” shrinking significantly, with registered voters who attend religious services at least weekly leaning to Trump by a 49-45 percent margin over Clinton. That is far smaller than the 55-40 percent advantage that Republican Mitt Romney held over President Obama at the same point in 2012.

With the key Catholic swing voter, Clinton actually leads Trump by a whopping 19-point margin among weekly Mass-goers, whereas Romney led Obama by 3 points among that same group — a 22-point shift.

And with Clinton’s selection of U.S. Sen. Tim Kaine, D-Va., as her running mate — a Jesuit-educated Catholic who served as a missionary in Honduras — the Democratic nominee, a lifelong Methodist who can speak fluently about her faith, has a chance to widen the lead over Trump.

The big question now, however, is whether the Clinton campaign is equipped to exploit that opening, or if it wants to.

READ: 5 faith facts about Tim Kaine: ‘I do what I do for spiritual reasons’

The campaign only hired a full-time faith outreach director earlier this month, and in the days leading up to Monday’s (July 24) official opening of the Democratic National Convention staffers were still scrambling to fill out a lineup of faith-friendly speakers and events to try to showcase their outreach to the media and a huge television audience.

“Hillary Clinton, and even the Democratic National Committee, have not been very active in pursuing the faith-based vote, nowhere even like what (the Obama campaign) did in 2012, which was nowhere like it was in 2008,” said John Green, director of the Bliss Institute of Applied Politics at the University of Akron and a leading expert in religion and politics. “So there really has been a decline in that” effort.

Moreover, Trump has been divorced twice and has a history of vulgar behavior and switching positions on foundational issues to many believers — like abortion rights — while often struggling during the campaign to present a convincing witness of his Christian faith.

“The bar is lower than it’s ever been for Democrats just to show they’re not antagonistic to people of faith,” said Michael Wear, an evangelical who worked on faith-based issues for the White House during Obama’s first term and then directed faith outreach for the 2012 re-election campaign.

Wear, who writes on faith and politics and runs a consulting firm, will be on one of several “faith council” panels that the convention is hosting in Philadelphia. 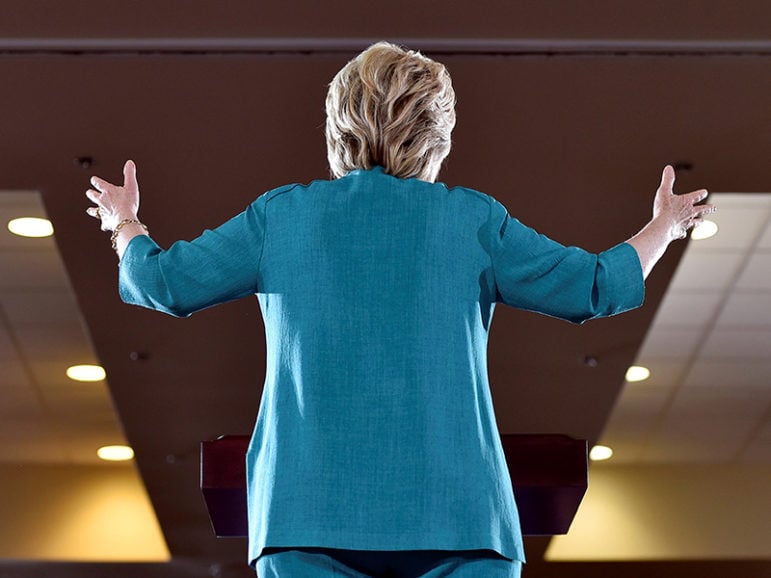 “Hillary doesn’t have to back down on principle one bit,” said Wear. “She never has. The question is whether they choose to look at the faith community as a convenient foil or whether they are going to live up to the message of unity and togetherness of the campaign and actually engage in faith outreach.”

In a sense, it’s as if the Clinton campaign is making the old mistake of fighting the last war: Democrats have been so unsuccessful at attracting pew-sitters to the polls that many party officials and strategists have simply thrown in the towel and decided it’s not worth the effort.

There are certainly strong arguments for not bothering too much with faith-based voters: As the electorate, like U.S. society, has become increasingly polarized, campaigns have become increasingly focused on turning out the base rather than trying to reach out to a shrinking center of persuadable voters.

For Trump and the Republicans that means trying to attract conservative Christians. For Clinton and the Democrats that has meant rallying the more secular voters and, in the process, often alienating faith-based voters.

Also, the Pew survey showed that even if Clinton isn’t generating as much enthusiasm among religiously unaffiliated voters as Obama did in 2012, she is winning that demographic handily.

More importantly, the number of so-called “nones” has risen sharply, from 14 percent of the electorate in 2008 to 21 percent this year — a larger bloc than Catholics (20 percent), white evangelicals (20 percent), white mainline Protestants (19 percent) or any other religious group. And they make up more than one-quarter of the Democratic base.

But many experts as well as some Clinton supporters say this shouldn’t be an “either/or” calculus. For one thing, voters who identify by religious labels or practice, when taken together, still far outnumber purely secular voters. Alienating them is probably not wise, nor is it a path to expanding the field of play.

“My view is that it’s worthwhile trying to maximize the vote overall,” said Green. “Going into the general election, that’s where there can be some real advantage” for Clinton, he said, especially if the contest is as close as expected. “In that mix, a faith-based appeal could be the thing that makes a difference.”

The campaign also seems to recognize the possibilities of appealing to the faith-based bloc.

Selecting Kaine as the vice-presidential nominee sent an important signal, and Clinton this month also hired John McCarthy, a graduate of Catholic University of America who worked on Catholic outreach for the 2012 Obama campaign, to coordinate faith efforts for the campaign.

READ: Why Trump has a Catholic voter problem

The campaign in January had already hired a Jewish outreach director and this month they also added Zina Pierre to fill a new slot as African-American faith director. More such hires are expected soon, said Xochitl Hinojosa, a spokeswoman for the campaign. “We are growing our team,” she said.

The question is whether, having arrived relatively late to the party, these faith outreach staffers will have sufficient sway and resources to make that message a priority. McCarthy said that won’t be a problem because faith is so important to Clinton herself and her message of unity is at heart a religious one.

“I would say that from Day One, because of who this candidate is,” outreach to people of faith “is something that has been at the very core of this campaign,” McCarthy said in an interview. “It’s going to be a lot of work going forward. But we have a great candidate who this means a lot to.”

Another serious challenge, however, is that Clinton has come out in favor of reversing the longstanding policy to bar federal funds from paying for abortions. The so-called Hyde amendment has been routinely attached to annual appropriations bills since 1976, a rare instance of ongoing bipartisan agreement in Washington.

The Democratic draft platform this year went so far as to incorporate a pledge to overturn the Hyde amendment, a single sentence that has infuriated Democrats who oppose abortion and those who, if they are pro-choice, want to at least allow room for other Democrats who would limit abortion rights or press for policies that seek to reduce abortions. “Political malpractice,” fumed a Protestant who has consulted with the party on faith outreach and asked not to be named.

Many of the angry Democrats are in fact the very Catholic voters and legislators that Clinton needs to woo in order to win in November. Sen. Joe Manchin of West Virginia called the platform language “crazy” and Sens. Joe Donnelly of Indiana and Heidi Heitkamp of North Dakota also objected. Pennsylvania Sen. Bob Casey, one of the hosts of the convention, wrote a letter to the platform committee calling for a change.

And one group, Democrats for Life, has put up billboards in Philadelphia proclaiming that “1 in 3 Democrats are pro-life” and that the party needs to be a “big tent” that welcomes a diversity of views and policy approaches.

Whether anything will come of the efforts to drop or alter the anti-Hyde language this week is unclear, but the issue certainly complicates the campaign’s faith outreach.

In the end, the party’s best hope, and best weapon, may be Clinton herself – if she decides to open up.

Clinton has said she doesn’t like to “advertise” her faith and she hasn’t spoken much about religion during the campaign. One notable exception came in January during a town hall event ahead of the Iowa caucuses when Clinton delivered an extended answer about how her faith informs her progressive views.

She also highlighted her faith a month later while campaigning in South Carolina where she wanted to attract African-American Christians who identify with the connection between faith and politics.

Will those episodes be harbingers of a general election message to convince voters that the GOP is not “God’s Own Party”?