(RNS) Donald Trump takes pride in rattling the GOP establishment, but he faces a major roadblock on the way to the White House.

Catholic voters, who have been key to picking the winning ticket in almost every modern election, reject Trump decisively. In 2012, President Obama won the overall Catholic vote 50 percent to 48 percent. Hillary Clinton now leads 56 percent to 39 percent, a sizable gap unlikely to close much by November.

If Trump and his vice presidential pick, Mike Pence, hope to persuade Catholic swing voters in battleground states such as Ohio and Florida, they must climb a steep mountain.

The news gets even worse for Trump when you break down the numbers from a Pew poll released last week. It’s not only Latino Catholics who are turned off by the blustery billionaire  — unsurprising given these voters’ Democratic leanings and Trump’s toxic anti-immigrant rhetoric.

More intriguing (or foreboding, depending on your view) is the fact that many moderate and conservative Catholics also don’t seem to buy what Trump is selling.

Consistently reliable Republicans who attend Mass weekly supported Mitt Romney four years ago by 15 percentage points. Clinton is winning this critical slice of the Catholic electorate by a whopping 19 points. The Republican ticket also usually performs well with white Catholic voters, who supported Romney by 9 points, 53 percent to 44 percent. Clinton has halved that gap, trailing Trump by only a few percentage points, 50 percent to 46 percent.

Why the dramatic shift?

Polls provide a snapshot of how voters size up candidates over a period of time, but unlike focus groups often don’t offer as much information for sifting through the reasons and nuances behind the numbers. Until we hear directly from voters about their motivations, there is only informed guesswork. But Trump’s looming Catholic problem can be deconstructed on a number of levels that take into consideration both substance and style.

The story of America, and the story of the Catholic Church, is a story of immigrants. 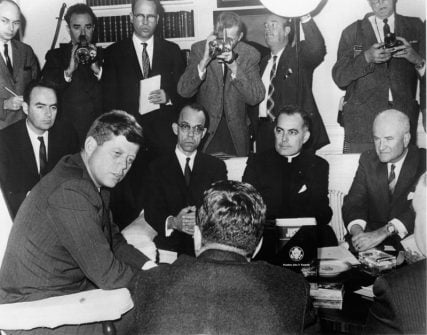 (RNS) President John F. Kennedy meets with the Civil Rights Commission at the White House, including the Rev. Theodore Hesburgh (seated, second from right), president of the University of Notre Dame, in 1961. RNS file photo

Part of Catholics’ DNA is an appreciation for how Irish and other immigrants toiled and thrived in the shadow of a suspicious, fiercely anti-Catholic culture dominated by white Anglo-Saxon Protestants.

When John F. Kennedy became the first (and so far only) Catholic president, his religion was viewed so warily by some Protestant clergy that he was compelled to give a landmark speech assuring the country he would not take his marching orders from Rome.

When Trump calls for a religious test for Muslims entering the country; questions the faith of Hillary Clinton, President Obama and Mitt Romney; and demonizes undocumented immigrants as “rapists,” it’s a reminder of the ugly nativism that Catholics once faced.

While this contemporary strain of old xenophobia is particularly felt by Latinos who increasingly are the face of the Catholic Church in the United States, many white Catholics surely take pride in family stories of grandparents and great-grandparents who were strangers in a new land. Trump has dug himself a deep hole he is unlikely to climb out of with these voters.

Trump has a Pope Francis problem.

Most politicians are smart enough not to tussle with a pope. Trump is the exception to that rule.

He clashed with Pope Francis during the pope’s visit to the U.S.-Mexico border in February, blasting the leader of 1.2 billion Catholics around the world as “disgraceful” and a “political pawn” of Mexico. 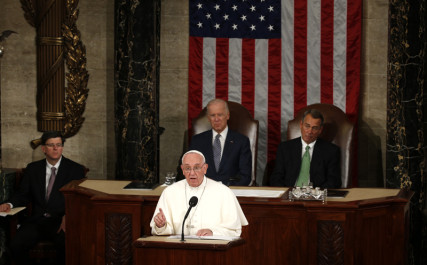 Pope Francis addresses a joint meeting of Congress as Vice President Joe Biden, center back, and House Speaker John Boehner, right, look on in the House chamber in Washington on Sept. 24, 2015. Photo courtesy of REUTERS/Kevin Lamarque *Editors: This photo may only be republished with RNS-NOTREDAME-BIDEN, originally transmitted on March 7, 2016, or with RNS-GEHRING-OPED, originally transmitted on July 20, 2016.

“A person who thinks only about building walls, wherever they may be, and not building bridges, is not Christian,” Pope Francis said in response to a reporter’s questions about Trump’s plan for a massive border wall.

It doesn’t take a high-priced political consultant to tell you that being on the wrong side of a widely popular pope who has captivated people far beyond the Catholic Church is a bad place to be. While no pope is going to ever dramatically sway the specific voting preferences of American Catholics, there is evidence of a “Francis effect.”

New research from Yale University and George Mason University finds that conservative voters who believe in climate change almost doubled in the last two years. The study cites a number of things that may have affected attitudes, including Pope Francis’ encyclical, “Laudato Si’,” which calls for urgent action to address climate change. Trump alienates the pope and these voters at his peril.

To watch Trump on the stump is to marvel or recoil at the magnetism and self-absorption of a Christian televangelist performing under the bright lights. Black-and-white claims are made with more emotion than reason. The performance, in many cases, is the whole point.

Trump’s campaign of personality surely attracts some voters who are wowed by the spectacle and see him as a fearless truth teller in an age of political correctness. But his brash oratorical style and often-simplistic arguments don’t sit well with experiences Catholics have with the quiet beauty of Catholic liturgy, or a Catholic intellectual tradition that for centuries has underscored the synthesis of faith and reason.

Catholic social teaching integrates the study of philosophy, history, science and theology. It’s a thinking religion. For Trump, his my-way-or-the highway pronouncements often seem to view facts and argument as distractions. For Catholics, our moral and intellectual tradition asks us to consider the complexity of “both-and” conclusions rather than the comfort of  “either-or” false choices. Catholicism is intellectually rigorous and built on centuries of tradition that still leave room for nuanced debate, a hallmark of education at Catholic colleges and universities across the country.

If Trump has an overarching theology that seems to guide his life, it seems to be that the power of the individual, the ego and personality can trump everything.

Trump will likely be energized after this week’s coronation in Cleveland, and he might even see a bump in his poll numbers. Once the post-convention buzz wears off, he will wake up to the sober reality that some of the nation’s most important religious voters are not at all charmed by his unorthodox candidacy.

(John Gehring is Catholic program director at Faith in Public Life Action and author of “The Francis Effect: A Radical Pope’s Challenge to the American Catholic Church”)