PHILADELPHIA (RNS) The world’s newest Mormon temple, in the heart of Philadelphia, aims to embrace and shut out the city at the same time.

Open to the public for a month before only Mormons may enter, the temple is an homage to Independence Hall, where the Founding Fathers drafted and signed the U.S. Constitution. Mormons consider the document divinely inspired, and a church-commissioned painting of Benjamin Franklin signing it hangs in the temple’s foyer.

Although this is the 152nd Mormon temple to be built, it is the one that most strongly connects Mormonism — one of the largest faith groups to be born in the United States — with the birth of the country. It’s an emotional tie for members of a church who have often been treated as a cult, outsiders in their native land.

“We believe that part of the reason for the founding of this country was to enable a faith such as ours to be established and to grow and flourish the way it has,” said Elder Larry Y. Wilson, who directs temple building for the Church of Jesus Christ of Latter-day Saints, the official name of the Mormon church. 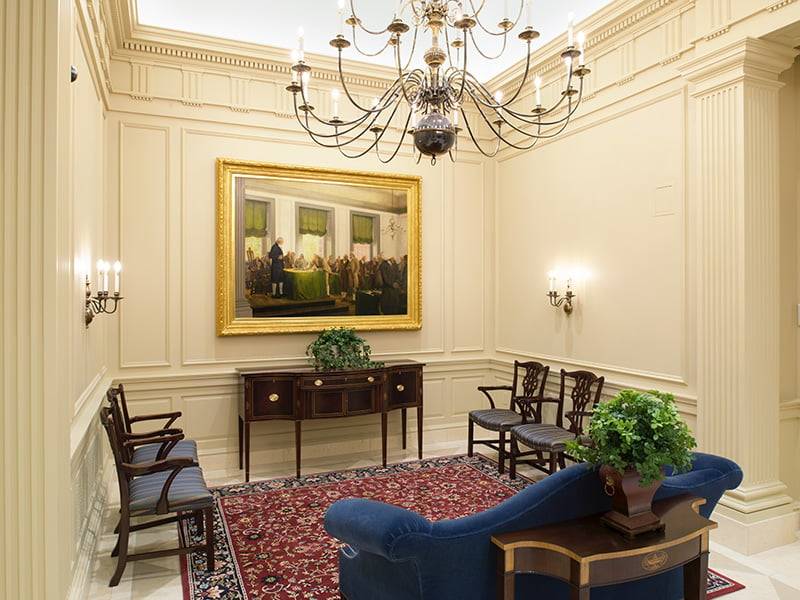 A painting of Benjamin Frankin signing the Constitution hangs in the foyer of the newly built Philadelphia Pennsylvania Temple, the only Mormon temple between Washington, D.C., and New York City. Photo courtesy of the Church of Jesus Christ of Latter-day Saints

From the painting to the details on the baptismal font railing, the Philadelphia Pennsylvania Temple, as it is called, honors not only Franklin’s city but also the state where the church’s first prophet was baptized and where half the Book of Mormon was translated.

Steps from the clamorous Vine Street Expressway, the granite building with its spire jutting about 20 stories into the skyline is foremost a place of spiritual quiet. The air conditioning on a recent summer day was powerful but silent, the carpets soft underfoot. Light gently refracted through thousands of crystals in the chandeliers.

“A temple is regarded by members of our faith as the house of the Lord, and just as with Solomon’s Temple, we seek to build it from the finest material and using the finest craftspeople to construct it,” Wilson said. 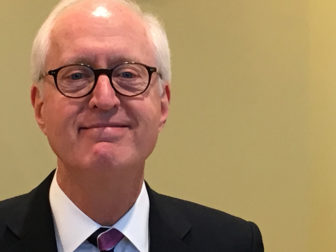 Elder Larry Wilson, head of the temple building department for the Church of Jesus Christ of Latter-day Saints. RNS photo by Lauren Markoe

Like the other 151 Mormon temples around the world, the Philadelphia temple is designed to make church members feel, as they ascend four stories to pray and meditate in the temple’s Celestial Room, that they are drawing ever close to God.

“It’s built as a haven for people to leave behind the world and get their bearings in the universe,” Wilson said. “We’ve tried to eliminate as much worldly influence as we can.”

Inside the temple there is no grand sanctuary in which to hear a rousing sermon, no wide aisle down which a bride might walk. It lacks what most churchgoers would recognize as an altar. The interior of the 61,000-square-foot building, rather, evokes a well-appointed Georgian-style mansion, with pale yellow carpeting, cream-colored walls, and burnished mahogany banisters.

The church will not disclose the cost of the temple, for which funds were raised through tithing.

Each of its rooms is designed for Mormons to prepare for or receive a particular blessing. Unlike the thousands of Mormon meetinghouses and chapels around the world in which non-Mormons are welcome — the equivalents of neighborhood churches — an LDS temple is built for members of the LDS church to participate in its religious rites, called “ordinances.”

These ordinances include the baptism of Mormons’ ancestors, and the “sealing” of marriages and families, so they may — as Mormons believe — live together in the afterlife. 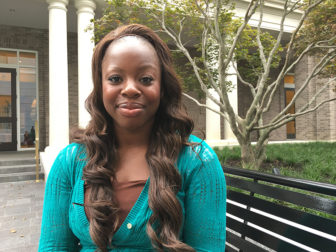 Josephine Scere, a member of the Church of Jesus Christ of Latter-day Saints from Philadelphia. The dedication of a Mormon temple in Philadelphia in September will end her monthly trips to the temple to which she had previously had to travel, outside Washington, D.C. RNS photo by Lauren Markoe

“We want to have everyone have the opportunity to be sealed into Heavenly Father’s eternal family as far back as Adam and Eve,” said Josephine Scere, a Mormon and school counselor who lives in Philadelphia.

Once the Philadelphia temple is dedicated on Sept. 18, Scere will no longer make her monthly trip to the temple to which she had been assigned, in Maryland just outside Washington, D.C. She will instead immerse in the font in the Philadelphia temple to, by proxy, baptize her deceased relatives in the faith — including those she has never met — so generations, she believes, will meet in heaven.

The Philadelphia Pennsylvania Temple, the first to be built in the state, will serve more than 41,000 Mormons in the region and be staffed by 800 church members — all volunteers. It sits midway between the two nearest temples, the one near Washington and midtown Manhattan’s.

To Mormons, another temple means more baptisms and more sealings — more people who can spend the afterlife with God and their families. 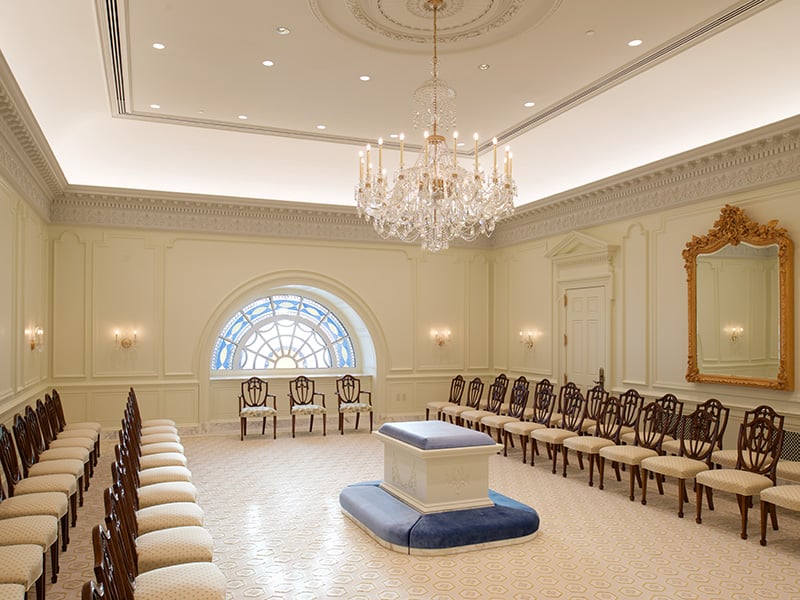 One of four sealing rooms in the Philadelphia Pennsylvania Temple, in which couples and families will be “sealed” to each other so that they may live together in the afterlife. Photo courtesy of The Church of Jesus Christ of Latter-day Saints

Mormons will give everything to seal themselves to their families, said Vai Sikahema, a Mormon leader from New Jersey, television news anchor and former player for the Philadelphia Eagles.

Living in a hut with a dirt floor on the island of Tonga in the 1960s, Sikahema’s parents saved for six years to buy one-way passage for their family of five to New Zealand, where there is an LDS temple.

Even before they had saved enough money to book passage home, they wanted “to receive the crowning ordinances that are only performed in temples.” They were sealed to each other and their children in a ceremony — Sikahema said through tears — that is his earliest memory.

“Our sacrifice as a family was no more difficult than someone who lives on Kensington and Allegheny,” he said, referring to a poor neighborhood in Philadelphia.

When you don’t have a car, traveling to Washington or New York by public transportation presents enormous obstacles, he said. “That’s why the church builds these temples where they’re built, and why so much of the resources of the church are used so that people don’t have to make the kinds of sacrifices that my family made.”

When every Mormon temple announced or under construction is complete, there will be about 175 around the globe to serve the world’s Mormons, who number about 14 million, with about 60 percent living outside the U.S.

“Someday there will be hundreds of temples around the world,” Wilson said.

Though one of the few major churches founded in the U.S., and one of the fastest-growing in the world, Mormonism remains a mystery for many Americans, along with its history. 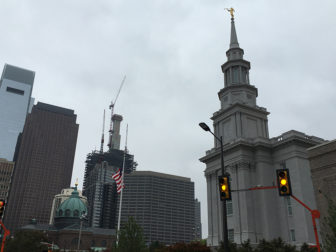 The Philadelphia Pennsylvania Temple of the Church of Jesus Christ of Latter-day Saints, right, sits just outside the city’s center. After its Sept. 18, 2016, dedication, it will serve more than 41,000 Mormons in the region. RNS photo by Lauren Markoe

After the establishment of the LDS church in 1830, Mormons endured hardship as they moved to settle lands in the Midwest and West, following their first prophet, Joseph Smith. Mobs attacked and killed Mormons, including Smith, who had sought to build the Kingdom of God in America. Many mistrusted members of the church for their claim to the true Christian theology, and their polygamy, which the church later repudiated. President James Buchanan in 1857 sent forces to counter “the Mormon problem” in a yearlong campaign known as “the Utah War.”

With the church’s members-only temples; prohibition on alcohol, coffee and tea; and reverence for Scripture unknown to other Christians, many outsiders today still look askance at the Mormons — yet admire them for their work ethic and commitment to family.

But the rare window between a temple’s construction and its dedication lends Mormons an opportunity to demystify themselves, especially in the eastern part of the United States, so far from the church’s Salt Lake City headquarters and the Western states where Mormons are more populous. From Aug. 10 to Sept. 9, the public may tour through the Philadelphia Pennsylvania Temple and ask questions of their Mormon guides.

The architecture and interior design all point to the importance of marriage and family in an individual’s connection to God.

The first floor baptismal room, for example, sets a warm pool atop a dozen nearly life-sized, bronze-plated oxen, each representing one of the Tribes of Israel. A mural shows the baptism of Joseph Smith in the Susquehanna River in northeastern Pennsylvania. 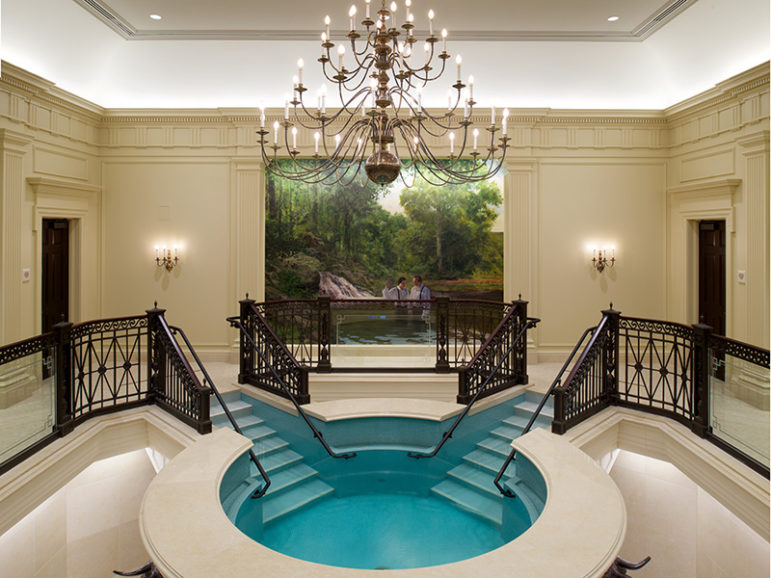 The baptistry at newly built Philadelphia Pennsylvania Temple, where Mormons will, by proxy, baptize their ancestors in their faith. Photo courtesy of the Church of Jesus Christ of Latter-day Saints

It is here, after a church member dons white clothes — symbolizing purity and the equality of all people — that he or she will immerse to baptize an ancestor of the same gender by proxy.

In one of the four sealing rooms, heterosexual couples marry and family members are bound to each other for eternity. The infinite reflections of the bride and groom in gilt-edged mirrors, which face each other on opposite walls, are meant to reinforce the idea that marriage will last beyond death.

After Sept. 18, when the temple is dedicated, only card-carrying Mormons will be admitted. The card, known as a “recommend,” shows that a church member has been deemed worthy of entry.

Once through the door, Mormons will see the painting of Franklin and one of Jesus that hangs below two crossed quills — one quill stands for the Book of Mormon, the other for the Constitution.

Has Benjamin Franklin been posthumously baptized in the LDS church? Yes, according to Mormon sources. But the church treads gingerly on this topic, having angered many when Anne Frank and other Holocaust victims were baptized by proxy.

“We don’t encourage people to do ordinance work for people who are not part of their family,” Wilson said. 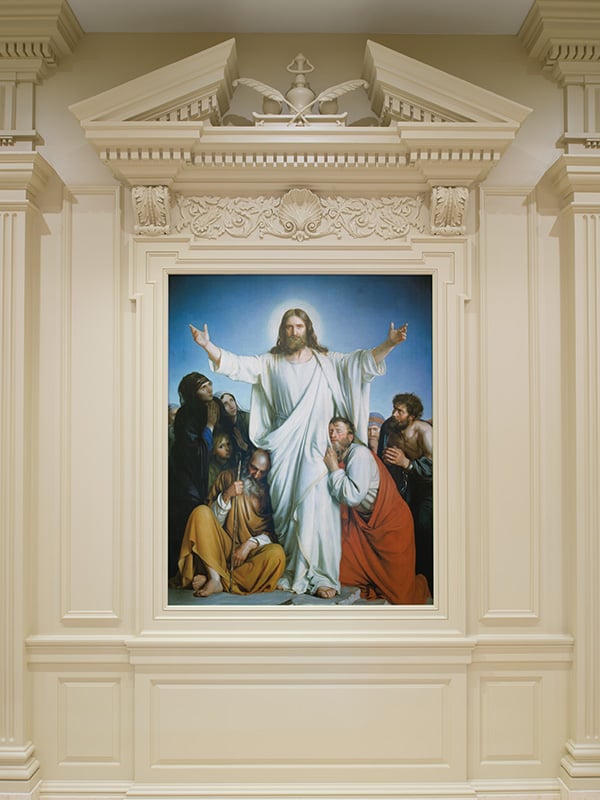 A painting of Jesus hangs in the foyer of the new Philadelphia Pennsylvania Temple of the Church of Jesus Christ of Latter-day Saints. Above the painting are two quills, one representing the Book of Mormon and the other the Constitution. Photo courtesy of the church