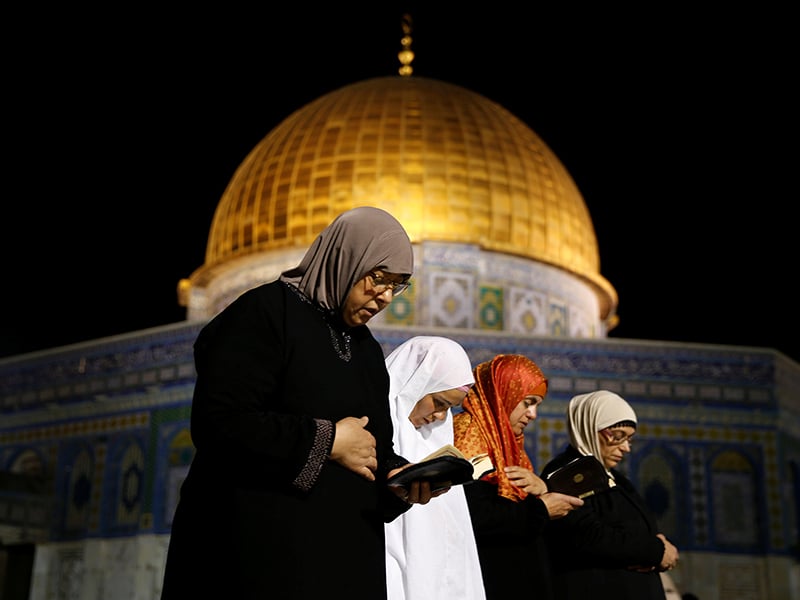 Palestinian women pray in front of the Dome of the Rock, at the compound known to Muslims as Noble Sanctuary and to Jews as the Temple Mount, in Jerusalem's Old City during the holy month of Ramadan on June 7, 2016. Photo by Ammar Awad/Reuters
July 24, 2017
Lauren Markoe

(RNS) — Jerusalem's Temple Mount is the holiest site in the world for Jews and the third holiest for Muslims — a place where millions of people have prayed for millennia. Yet, often, it is a launching pad for deadly attacks and counterattacks.

The most recent violence unfolded on July 14, when three Arab residents of Israel fatally shot two Israeli police officers guarding the Al-Aqsa Mosque. In response, Israel erected metal detectors and cameras at entrances to the mosque. More deaths followed as three Israelis were stabbed to death in the West Bank, four Palestinians were killed in East Jerusalem, and this weekend a Jordanian worker stabbed an Israeli Embassy worker.

After more than a week of violence — and a flurry of diplomatic closed-door meetings — Israel announced it would remove the metal detectors. But those are just the latest symbol of the broader struggle over ownership and control of the sacred site.

What is the Temple Mount and why is it holy to different groups? And why are some willing to fight over it? Let us ’Splain ...

What does the Temple Mount consist of?

The Temple Mount consists of three main sacred sites — the Al-Aqsa Mosque; the Dome of the Rock, sacred to Muslims for its ties to the life of the Prophet Muhammad; and the site of the Second Jewish Temple. The site is sacred to Christians, too, as Jesus is believed to have walked there. Its most visible feature is the golden-roofed Dome of the Rock, visible from much of the city.

There's actually no temple at the Temple Mount?

Right. There is a remnant of a retaining wall that helped support the Jewish temple. What is known as the Western Wall buttressed the Second Temple, destroyed by the Romans in the year 70. There are no remains of the First Temple,  built by Solomon, the king of ancient Israel and Judea, and destroyed in the sixth century B.C. by the Babylonians.

Why was the First Temple built?

King David wanted to build a permanent resting place for the ark containing the Ten Commandments, a task that fell to his son, Solomon. In ancient times, the Jewish high priest would enter the temple once a year on Yom Kippur to pray to God on Israel's behalf. Orthodox Jews still pray three times a day for its restoration.

Rabbi Tzvi Graetz, executive director of the World Council of Conservative/Masorti Synagogues, said that when it was destroyed, "it wasn't just a building that was destroyed, an entire nation went into exile."

Is the Temple Mount holy to Muslims in the same way?

Not exactly. According to the Quran, the top of this mount was the holy landing place in about 620 for the Prophet Muhammad. After his "Night Journey" on a winged beast to the Al-Aqsa Mosque in Jerusalem, Muhammad prayed, and the angel Gabriel offered him water, wine or milk. The prophet chose milk, and Gabriel told him that meant his followers would follow the true path, Islam.

It is also the place from which Muslims believe that Muhammad ascended to heaven.

On peaceful days, that's what happens. Muslims pray at the two mosques at the "top" of the Temple Mount  — which they call the Noble Sanctuary — and can look over the edge to see Jews praying at the Western Wall below.

But both Israelis and Palestinians have intentionally upset the peace at the Temple Mount, knowing that any disturbance there is likely to send violent shock waves far beyond.

In 2000, Ariel Sharon, then the leader of Israel's opposition party, took a delegation to the top of the Temple Mount, inciting rioting from Muslims and sparking the Second Intifada, which resulted in the deaths of more than 4,000 Israelis and Palestinians.

In 2014, a Palestinian shot Rabbi Yehuda Glick near the Temple Mount. Glick wanted Jews to pray freely at the top of the Temple Mount, which Israel does not allow, for fear of inciting violence. Since his assailant was killed by Israeli security forces, Palestinians have mounted several attacks on Israelis. Israeli police have killed rioters and terror suspects.

So who is actually in charge of the Temple Mount?

Jordan pays the salaries of the employees of an Islamic waqf, or trust, that oversees the Noble Sanctuary. But Israel, which has soldiers stationed around the Temple Mount, effectively controls access to it. After the attempted assassination of Glick, for example, Israel closed the Temple Mount to men under 50.

What's this I hear about a Third Temple?

In Judaism, there is a belief that a new temple should be built on the ruins of the First and Second. But most Jews consider it an unrealistic and dangerous goal given that it would entail the destruction of the Noble Sanctuary. As Graetz puts it: "Some extremists have the terrible fantasy of blowing up the mosque and building a temple. That's not the kind of temple I would ever want to visit."