(RNS) – The phrase “Mormon environmentalist” is not one you hear every day, given that Mormons in the United States are often politically conservative. But Utah resident George Handley is exactly that – committed to both the Mormon faith and to rescuing the environment.

As a professor of interdisciplinary humanities at Mormonism’s flagship school, Brigham Young University in Provo, Utah, Handley has long penned nonfiction that has addressed the impact that human beings are having on the planet. But now he’s channeling his creative energies in a new direction, through fiction. His debut novel American Fork has just been released from indy press Roundfire Books.

Set in 2001, American Fork tells the story of a reclusive botanist, Zacharias Harker, who enlists the help of a young artist, Alba, in chronicling the damage climate change is wreaking in Utah’s Wasatch Mountains.

“Alba is someone, as an artist, who is just discovering her love of the natural environment,” says Handley. “And Mr. Harker has a deep connection to the natural world that’s not a function of an academic or political interest, but something deeper. He’s wrestling with deep existential questions that emerge from the suffering he’s had in his own life, which unfolds as the novel moves forward.”

Alba’s interest in the environment is strongly influenced by her Mormon faith, which is also true of the author, who says his approach is “strongly influenced by literature and art and spirituality. I certainly am interested in the politics surrounding environmentalism, but I tend to think of those issues as less of an activist and more of a humanist and a believing Mormon.”

Not all Mormons would agree. In the Next Mormons Survey, a nationally representative sample of Latter-day Saints conducted in 2016, only 41% of Mormons agreed with a statement that “the earth’s climate is getting warmer because of human activity.”

The results were even lower among Mormons in Utah, the setting of Handley’s novel: just over a third of Utah Latter-day Saints say the climate is changing because of human activity.

Handley says he’s not surprised by this resistance to scientists’ findings about climate change and the environment, though it saddens him. “I live it and experience it all the time,” he says, noting that in two decades of teaching at BYU, he has worked to bring people with different ideas into dialogue with each other.

“I spend a lot of time trying to help people identify the common ground they already have. Obviously, I’m interested in helping people understand the science and be informed with the best information, but you can’t go into discussions seeing climate change as some kind of culture war. It’s such a non-starter.”

At BYU, he has co-taught a course with biology professor (and novelist and friend) Steven Peck, focusing on religion and the environment. Because of the success of that course, Peck offered a related spinoff elective in the biology department, and Handley wound up designing an environmental humanities program. 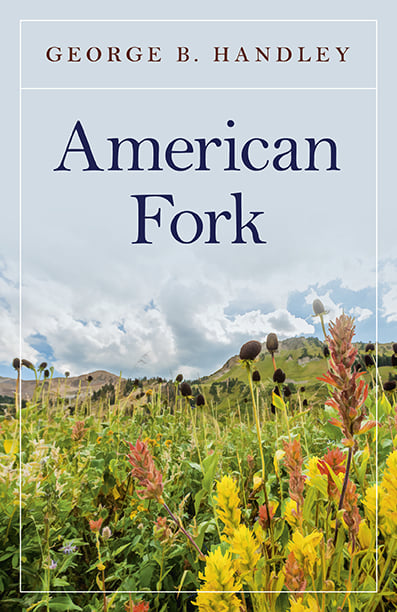 Now through fiction, he is able to weave environmental themes into the lives of his characters. “There is increasing interest in the ways in which fiction can help us think about the environmental crisis in productive ways that are harder to come by in other forms of writing,” he says. He cites the nature writing of Barbara Kingsolver and Amitav Ghosh as formative in the burgeoning field of environmental fiction.

“The compelling case to be made for narrative is that it allows you to step into a world that can shape your moral imagination in vital ways. If the fiction writer is doing his or her job well, the novel can retrofit your imagination.”

Handley will promote the novel with readings and book signings in Utah, including an appearance at the King’s English Bookstore in Salt Lake City on the evening of Tuesday, May 29.

So far, he says, the early response has been quite positive, though he would not be surprised to have some pushback from a few conservative Latter-day Saints. Handley says he wishes religious people would “put down the sword of political ideology” where climate change is concerned and “just think about and celebrate the principles and values of stewardship, which are so beautifully articulated in Mormon doctrine. And really get serious about living up to the responsibilities that are spelled out in our scriptures.”

Mormonism, he says, is actually a treasure trove of concern for the environment, which is something he hopes more Latter-day Saints will take seriously. “We either neglect a lot of those teachings or we actually dismiss them. In the name of a political set of loyalties we think that environmental concerns are things we should be dismissive or distrustful of.”

Another weird and wonderful Mormon novel from Steven L. Peck

Can Mormons be more green?