Just now when I was writing up the keywords for this post, one of them was “novels with rats as main characters.” I think that is a first for this blog. And it will be a first for many Mormon readers as well, but can I just say . . . trust me? Trust me. Gilda Trillim: Shepherdess of Rats is worth the risk of your time.

If not, you can send the rats after me.

So here’s an interview with Steven L. Peck: BYU biologist by day, novelist by night. And one of my favorite stars in the constellation of Mormon creativity. — JKR

RNS: I loved the new book, but it’s so hard to describe it to people. I’ll say things like, “This is this amazing, beautiful novel . . .” and then I get sort of stuck. I can’t even tell them the basic plot because it’s about a champion Mormon badminton player who gets taken as a prisoner of war in Vietnam and winds up starting a choir with a group of jailhouse rats. It’s, um, different.

Peck: A lot of my books are that way. The moment you start talking about two-headed cowboys, you sort of lose your credibility.

This book, for me, meant more than just writing the story, because I actually was trying to think through some of the real issues I have with theology. I think Gilda Trillim was an exercise in trying to understand what my theology means on an existential scale, which just sounds pretentious, but what I mean is how my belief explores how novelty enters the universe. 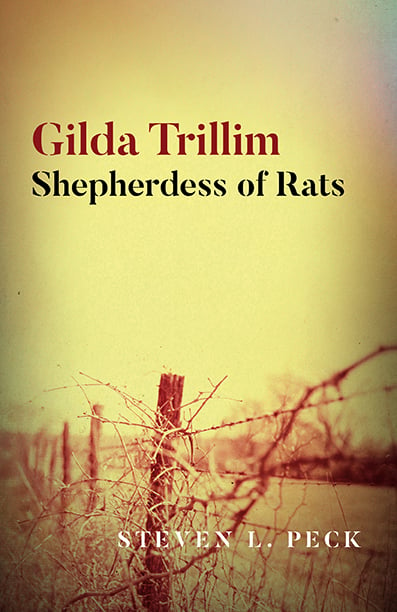 For me, as Gilda Trillim developed her relationship with the rats while she was a POW in Vietnam, she created something so new and so unlikely there was no reason it ever had to come into existence. But when it did, it added to the beauty and wonder of the universe. And so she became a vehicle for exploring those kinds of novelties, including relationship novelties—how we form relationships, and how they create newness and wonder in the universe, and how relationships can deepen a life. It’s an amalgamation of science and the humanities and all of the aspects that go into being a human. I hope she represents that.

And I hope I’m capturing something that’s sort of hard to talk about, which is that sense that life goes beyond the ability to express it. There are things in life that transcend our ability to put them into words. What I hope the book does is, like good poetry, recreate the experiences that she’s having rather than try to describe them.

RNS: There’s a lot of format mixing in the story, like letters where we don’t know if they’re are fact or fiction. Were you consciously doing this in a postmodern way?

Peck: The story was always meant to be that. I did maybe five blogs about Gilda Trillim at By Common Consent. I wrote the first part, Vignette 1, the one where it describes her relationship with the Association of Mormon Letters, and what it means for her to be a minimalist writer. I gave examples of the list of words that form her novels. I thought I was being really obviously inventive and fictional. But when I published at BCC, I just put it up there with a bunch of links to a statement that said, “Gilda Trillim does not exist in your timeline.” But apparently a lot of people didn’t click on this, and in the comments some literary people weighed in asking, “Why haven’t I discovered her before?” She got taken as real.

This is similar in format to the Scholar of Moab, with the novel unfolding among multiple kinds of documents, but with real and fake academic references peppering the text. I don’t know why, but I particularly enjoy making up references. I really have fun with that, creating a fictional universe where there’s an academic debate going on about Gilda, and different scholars weighing in on her impact.

RNS: Speaking of your other fiction, I don’t know if I’ve quite forgiven you for A Short Stay in Hell. That book gave me nightmares. I think it’s a real testimony to my regard for you that we are still friends after that book.

Peck: On Goodreads, if you do a word cloud of my reviews for that book, the most common thing is “disturbing.” It had that effect on me too. Sometimes if there’s something I’m wrestling with, I work through it by writing. So this is kind of like The Scholar of Moab, in which a redactor is trying to piece together the death of one of the characters, though that novel is way funnier than Gilda Trillim.

I don’t know, but Gilda became real to me at some point. When I’m writing, I don’t really have as much control of the characters as you’d think. Sometimes when something happens, I actually am surprised because I didn’t see that coming. It’s a very organic process for me.

RNS: What about the book’s Mormon connection?

Peck: The Mormon connection is really explicit in this book, which is why it seems almost a miracle that this is being published by a mainstream press. Gilda is someone who never left the Church, but she feels like the Church has left her. She felt unappreciated in her writing, and the Church went in directions she couldn’t follow. It’s not that she leaves the Church; she just doesn’t feel comfortable there.

I think I was trying to capture something with her that speaks to modern Mormonism, which comes out in a scene where she’s being interviewed by a reporter. He wants her to talk about rumors that she’s had a profound spiritual experience, which she had written about privately, an experience with Heavenly Mother. This is my favorite dialogue in the whole book, when she refuses to tell him. She says that if she does tell him, one of two things will happen—either he’ll go and form a church around that experience or he’ll talk her out of it. What’s more likely: that Gilda Trillim had one of the most amazing spiritual experiences in recorded history, or that she imagined it when she was under terrible duress as a POW? She says “no, of course you shouldn’t believe me; you should go out and try to have those experiences for yourself.”

For me, I kind of feel that’s what has happened to Joseph Smith now. This incredible experience, rationally, can be looked at in a couple of ways—either you believe him or you dismiss it. But the real response is that he’s opened a world that you can enter. That’s probably the most Mormon thing in there, which is that Gilda is recapitulating what we do with sacred encounters. We can have them, but we can’t analyze them rationally or dissect them. If we do, they either lose their power or we build a religion around them rather than having our own experiences.

The last chapter is as Mormon as it gets, when she talks about taking the sacrament. I’m playing with theology in a sense, because I want people to believe in the kind of Mormon theology that plays with novelty. The next life isn’t just one of doing the same old thing, but is one of radical novelty and creativity.