(RNS) — At a dinner last year with prominent evangelical Christians in the Blue Room of the White House, Ivanka Trump and her husband, Jared Kushner, invited their table mates to discuss the issues most important to them.

The Rev. Samuel Rodriguez, president of the National Hispanic Christian Leadership Conference and one of President Trump’s informal evangelical advisers, remembered Kushner asking him, “What’s in your heart? What are your priorities?”

At the top of the pastor’s list was “bringing the nation together.”

“We could really do this, and we can do it way beyond the rhetoric. For example, let’s look at prison reform,” Rodriguez said.

Johnnie Moore, founder of The Kairos Co., a strategy firm, who recently was appointed to the U.S. Commission on International Religious Freedom, described it as an “incredibly enthusiastic conversation.”

“Sparks were flying all around the table, and then Jared had this idea,” Moore said. “He said — it was a brilliant idea, and this was the impetus, the beginning of things — ‘What if we got every church or synagogue to take responsibility for one prisoner re-entering society? You think that could work?’”

That dinner planted the seed of what would grow to become the proposed First Step Act, aimed at reducing the number of people who return to prison after serving time.

That bill overwhelmingly passed the U.S. House of Representatives earlier this week with not only bipartisan support from lawmakers, but also the support of a number of prominent evangelical Christians and institutions. And while the bill’s fate in the Senate is uncertain, the support it’s gotten from both sides of the aisle is already being counted as a major success on an issue that evangelicals have long tried to put their stamp on. 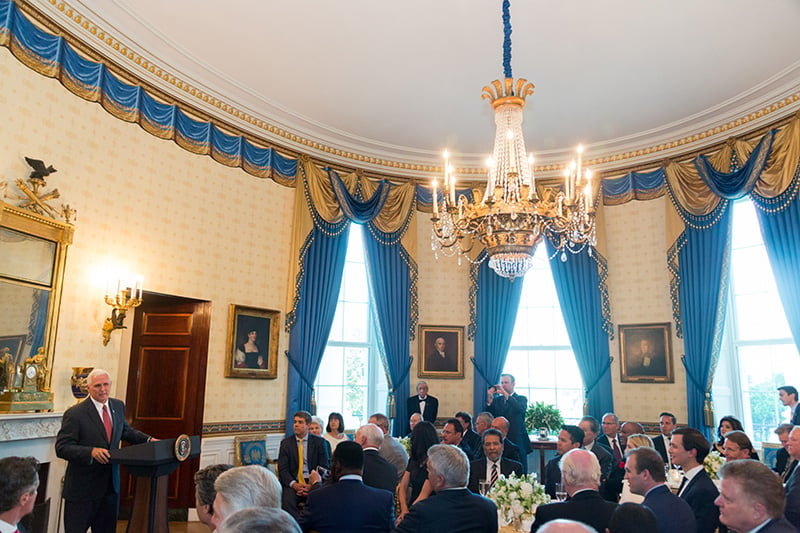 Vice President Mike Pence delivers remarks during a dinner with religious leaders on May 3, 2017, in the Blue Room of the White House in Washington.  Photo by Shealah Craighead/White House

“We have a lot of hope. This administration is genuinely interested in second chances.”

Prison reform has been a signal issue for evangelicals since Charles Colson, a former aide to President Nixon, found his evangelical Christian faith while serving seven months in Maxwell Prison in Alabama for Watergate-related crimes.

It was Colson, as White House special counsel, who had first framed Nixon’s “political template of being tough on crime and long sentences,” DeRoche said. Colson’s prison experiences produced a change of heart. “Within three years he was saying that model was in conflict with our values as Christians and as Americans and that it would lead to failure.”

Prison Fellowship, which Colson founded in 1976, is now the country’s largest, but hardly the only, Christian prison ministry.

The plight of prisoners has been a priority for churches large and small “almost as long as the church has existed,” Moore said.

After Colson’s death in 2012, many evangelical Christians picked up the cause of criminal justice reform, Moore said. As the U.S. prison population has swelled, he added, the issue has touched many Christians personally.

Since Trump has taken office, Christian organizations have claimed “unprecedented” access to the White House. DeRoche has taken part in meetings with Trump’s aides, including his son-in-law, Kushner, but also with Cabinet members and staffers from the departments of Justice, Labor, Health and Human Services, Education and Housing and Urban Development. It’s not unusual for the White House to welcome that input from Prison Fellowship, however, according to DeRoche. The organization has worked with every administration since President Carter.

On a press call Wednesday morning (May 23) after the First Step Act passed the House, Prison Fellowship President and Chief Executive Officer James Ackerman recalled a meeting he and DeRoche attended a few weeks ago with Vice President Mike Pence.

As the three men spoke in Pence’s office in the West Wing, the vice president mentioned Colson had been a mentor to him. Going to his desk, Pence picked up his Bible, which Ackerman noted was “marked up like none I’ve ever seen,” indicating to him that the vice president “clearly is a fervent studier of the Word of God.” He flipped to the back of the book, to some notes he had taken on a talk Colson had given in 2006 at a church in Indiana.

“He read us those notes, and I could hear Chuck’s voice in it,” Ackerman said.

The conversation about prison reform isn’t just a religious conversation anymore as the justice system, from the White House down to local prosecutors, has begun to weigh the cost of mass incarceration. (For Kushner, whose father had spent time in federal prison for illegal campaign contributions, tax evasion and witness tampering, the issue has personal relevance.) 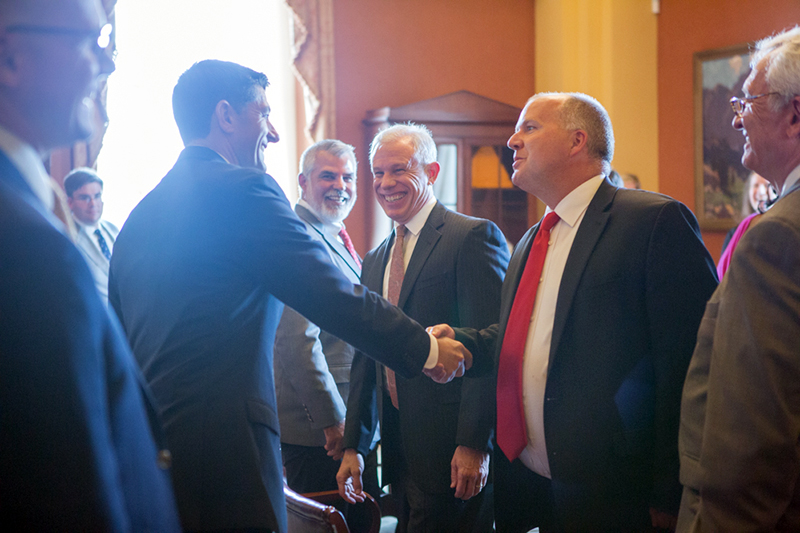 First Step, an acronym for Formerly Incarcerated Re-enter Society Transformed Safely Transitioning Every Person, focuses on recidivism, the number of people who finish their prison terms or are paroled, only to land back in confinement.

Among other things, First Step would encourage prisoners to join programs, such as faith-based classes and job-training programs, that have been shown to reduce recidivism. With “earned time credits” awarded for their participation, prisoners could be released early to halfway houses or home confinement. It also would assess which programs are most effective for individual prisoners.

In the year since the dinner in the Blue Room, the initial enthusiasm had to weather seemingly endless meetings, attempts to act through executive orders in place of legislation and other delays — a previous iteration, the Prison Reform and Redemption Act, foundered in April over its lack of sentencing reform provisions. More than 20 Christian, Jewish and secular institutions had signed a letter of support for that bill, including Prison Fellowship, the Christian Community Development Association, the Faith and Freedom Coalition, the National Association of Evangelicals, the National Hispanic Christian Leadership Conference and the Southern Baptist Convention’s Ethics and Religious Liberty Commission.

After some revisions, the First Step Act was ushered through despite similar objections that it treats only “back end” causes of mass incarceration — recidivism — and not “front end” causes such as mandatory sentencing. Heather Rice-Minus, Prison Fellowship’s vice president of government affairs, said there isn’t enough consensus among lawmakers now to get a bill including sentencing reform to the president’s desk. 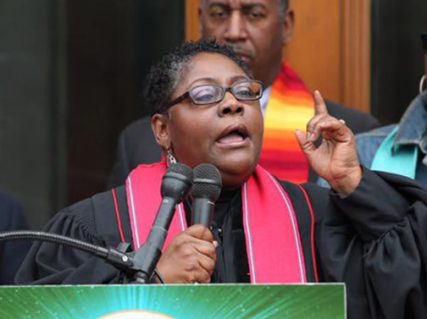 “We’re still going to fight for that,” Rice-Minus said. “We consider the First Step Act just that — it’s a first step.”

Democrats in the Senate are reportedly still divided, saying the reforms aren’t enough without also looking at sentencing.

So are some Christians, especially those on the left.

“There’s so much in the bill that gives false hope to people,” the Rev. Aundreia Alexander, associate general secretary for action and advocacy at the National Council of Churches, said during a press call earlier this month.

RELATED: ‘Rethinking Incarceration’ author on justice, race and the fact Jesus was incarcerated

Rodriguez, the head of the National Hispanic Christian Leadership Conference, said he too is disappointed that the bill overlooks sentencing reform. The disparity in sentencing — that people who are African-American or Hispanic are more likely to be incarcerated than people who are white — is something he said nobody can deny, no matter what their politics. And Christians, he said, are compelled by the message of Jesus to speak against such injustice.

The Rev. Samuel Rodriguez in 2013. Photo courtesy of NHCLC

When he mentioned the possibility to his multiethnic congregation, he said, “I had African-American men who started to weep and cry.”

At the same time, Rodriguez said the First Step Act is a step in the right direction.

The evangelical Christians who have tied themselves to the White House are also glad to  show they can have influence on justice and equity, matters the public may not associate with the religious right.

“While much of the media obsession has been on evangelicals’ role in pro-life issues or religious freedom,” Moore said, “I think we’ve actually made the most consequential difference in these areas of social concern, and we’re more involved in those conversations now than the other ones, honestly.”