This month, Mormons are celebrating the reversal of the priesthood/temple ban that was in place in the LDS Church until 1978. In the Next Mormons research, one question we endeavored to answer was how Mormons today feel about the ban.

I found the results surprising, and also rather depressing.

Just to explain this policy, until 1978 any Mormon of African descent was prohibited entrance into the Church’s temples for ordinances such as sealings and endowments. This effectively barred them from entering the highest level of heaven after death (the Celestial Kingdom), which Mormons believe can only be obtained by people who have received those ordinances in the temple.

The ban also prohibited men of African descent from holding the LDS priesthood, despite historical evidence that several black men were ordained to the priesthood under Joseph Smith before Brigham Young forbade it in 1852.

The 2016 NMS asked whether respondents felt that the ban on members of African descent was “inspired of God and was God’s will for the Church until 1978.” Respondents were given a five-point scale of possible responses, with the upshot being that nearly two-thirds of self-identified Latter-day Saints say they either know (37 percent) or believe (25.5 percent) that the ban was God’s will. 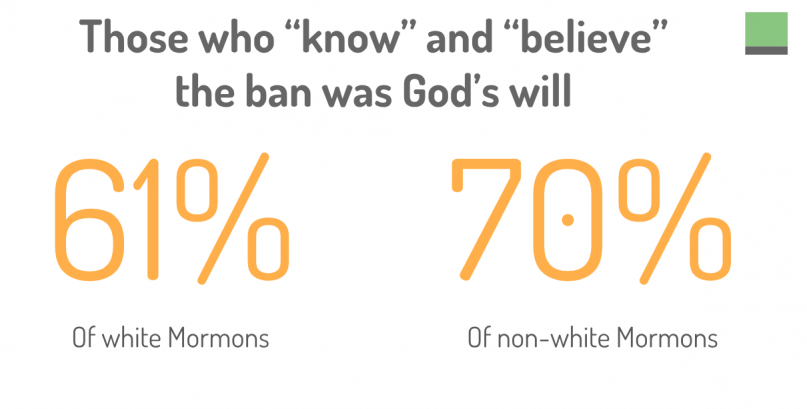 One major surprise in the data was that Mormons of color were actually more likely to say they knew or believed the ban was God’s will than white Mormons were. 70 percent of non-whites affirmed this, compared to 61 percent of whites. That also remains true when we consider only African American respondents in a group by themselves: 67 percent of African Americans know or believe the priesthood/temple ban was God’s will, which is six points higher than the rate for whites. (The margin of error is high, however, since there were only 50 African American Mormon respondents in the study.)

Just because many non-white Mormons view the priesthood/temple ban as having been inspired by God does not mean they have warm feelings about it. About four in five say they are at least a little “troubled” by the ban, while only one in five are “not at all troubled.” Among white Mormons, by contrast, about one in three were not at all troubled.

On a personal note, I’m in the minority here. I’m an active Latter-day Saint who believes the ban was the result of human error.

It was never God’s plan to deny an entire race of people entrance to the temple—and thus to eternal life—simply because of the color of their skin. We did that. Human beings did.

Mormons have come up with at least four different and rather horrifying excuses for our actions, including, in a rough chronological order:

This was a nineteenth-century American staple, and as the Church’s 2013 Gospel Topics essay on race points out, was common in society outside of Mormonism. This has not been taught by Mormon leaders for decades, but it’s certainly still on the books from the Young era. 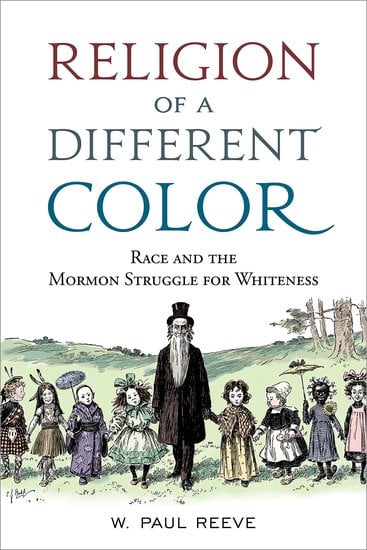 This idea that blacks failed to choose a side in the “war in heaven” became more common about a hundred years ago, in the early 20th century. (See footnote 14 of the Gospel Topics essay, or Paul Reeve’s outstanding history Religion of a Different Color, 254–256.)

Bruce R. McConkie practically codified this folk belief in his 1950s bestseller Mormon Doctrine, which remained available through the Church’s official publisher until 2010.

(See here for my celebratory post when the book was removed from circulation.)

This one hit the news as recently as 2012, when a BYU professor was quoted in the Washington Post as claiming that the ban was actually to the benefit of blacks, because they were not prepared for the responsibility until then. He compared the situation to a child asking for car keys before being mature enough to use them.

That same month, the LDS Church issued a statement that disavowed this professor’s reasoning. (“Some explanations with respect to this matter were made in the absence of direct revelation and references to these explanations are sometimes cited in publications. These previous personal statements do not represent Church doctrine.”)

But that same statement also leaned heavily upon Reason #4, which was . . .

The Church’s 2012 statement was wonderful in its express condemnation of racism, but puzzling in its insistence that “It is not known precisely why, how or when this restriction began in the Church.” This month’s Ensign magazine further makes the claim that “no known records exist” to explain how the policy came about—which caused Jonathan Stapley to rightly and eloquently cry foul over at By Common Consent. There are copious historical records, and the evolution of the ban has been traced meticulously by historians like Paul Reeve.

The problem is that Mormons want to engage in a collective amnesia because to do otherwise would be to admit the truth: that Brigham Young made a colossal and tragic mistake.