It’s been quite a few days. On Sunday, the LDS Church responded to white supremacist violence in Charlottesville with a loving and gentle reminder about the dangers of intolerance, which included a quotation from former Pres. Gordon B. Hinckley:

Almost immediately, members of the LDS alt-right seized upon this benign statement as — wait for it — confirming their racist view that white people need to be cherished and protected.

For example, Wife with a Purpose, who claims that she is neither part of the alt-right nor a white supremacist, yet has cheerfully issued a “white baby challenge” to return white America to its former dominance over other races, appropriated Pres. Hinckley’s words as confirming her own views. 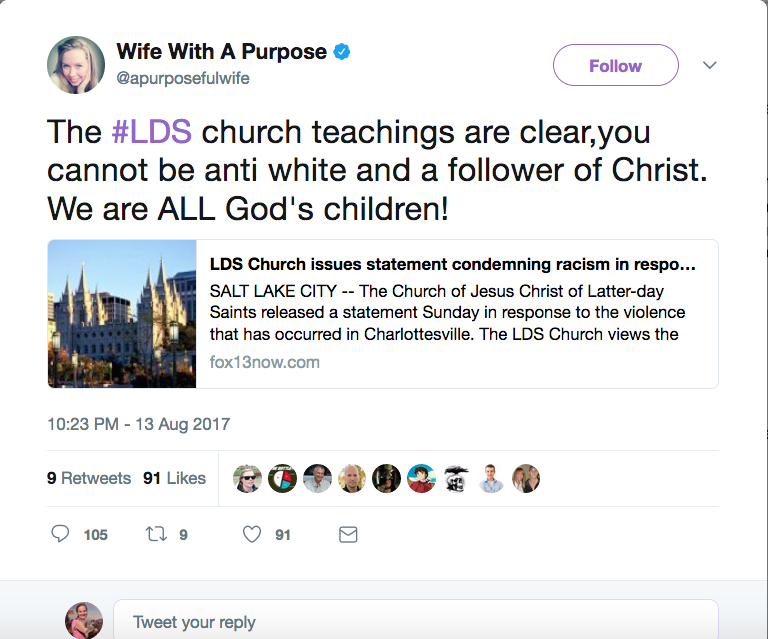 So she interrupted her usual bizarre feed, which features a stream of memes of smiling white folks in traditional European dress and rants about whites being the underreported victims of black aggression, to fully position herself as in alignment with the LDS Church’s teachings on race.

It’s rare for the LDS Church to issue a clear and unambiguous smackdown to anyone. It’s rarer still for the Church to state openly that it is issuing said smackdown because its previous message was so blatantly and recklessly misunderstood. But here is what the Mormon Newsroom released about an hour ago:

“It has been called to our attention that there are some among the various pro-white and white supremacy communities who assert that the Church is neutral toward or in support of their views. Nothing could be further from the truth. In the New Testament, Jesus said: ‘Thou shalt love the Lord thy God with all thy heart, and with all thy soul, and with all thy mind. This is the first and great commandment. And the second is like unto it, Thou shalt love thy neighbour as thyself’ (Matthew 22:37–39). The Book of Mormon teaches ‘all are alike unto God’” (2 Nephi 26:33).

“White supremacist attitudes are morally wrong and sinful, and we condemn them. Church members who promote or pursue a ‘white culture’ or white supremacy agenda are not in harmony with the teachings of the Church.”

Immediately afterward, Wife with a Purpose sallied back a string of tweets denouncing the Church’s statement. 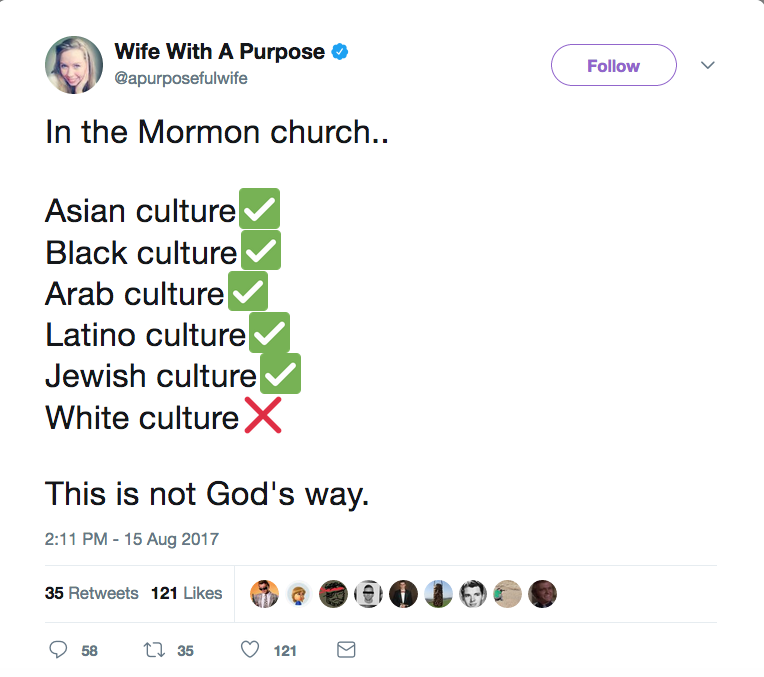 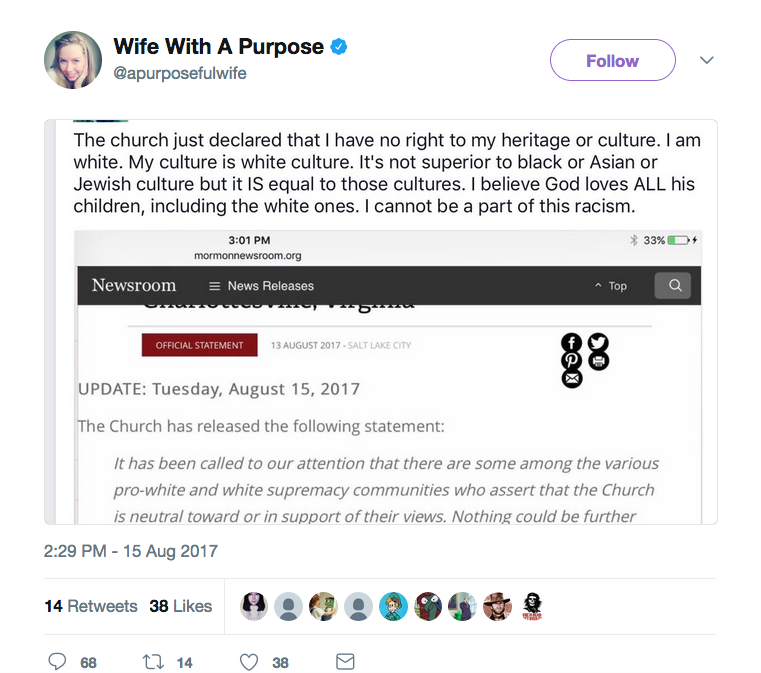 If the Church denounced her, she was ready to denounce it right back, declaring that it had turned its back on its white members and she could no longer be part of such a racist organization. (Um, please let it be true that she is resigning? I have been good all year and would gladly accept that for Christmas in lieu of the previously requested pony. Thank you.)

I’m glad to see the LDS Church come out swinging on this issue. If we’ve learned anything in the last week, it’s that folks who say they just want to “celebrate” white culture do so at the expense of every other race under the sun; their claims that they just want to quietly honor their own people without doing damage to anyone else are a bunch of horseshit. Excuse my Mormon French.

And the official LDS Church is not the only Mormon group speaking out. Tonight, an op ed will appear in the Salt Lake Tribune directly taking on the ongoing problem of racism in the Mormon community. The Mormon alt-right is a very extreme and tweetable version of it, but other stubborn forms exist.

Joanna Brooks, a Mormon author and scholar who is helping to put together this effort, says it’s being spearheaded by “LDS scholars and anti-racism advocates” who have put together “a very practical resource addressing racism and what we can do to take on white supremacy and racism in the white community.” I gladly signed my name.

If you want to get informed about racism in the Mormon world and do something about it, check out their website at shouldertothewheel.org. The effort will be launched formally this fall, but this gives a peek of some things you can do to educate yourself and put a stop to the pernicious efforts of white supremacists.

Evening update: There’s a terrific post by historian Benjamin Park about today’s announcement from the Church here. An excerpt: “But perhaps just as important, it was a direct attack on so-called ‘white culture.’ This is one of the rare instances where the Church went beyond what was expected. It even placed ‘white culture’ in scare quotes, implying that such cultural categories are artificial constructions and ‘not in harmony’ with LDS teachings. . . this stance is quite progressive when compared to most official official positions. And since it was presented by the Newsroom–in many ways, whether good or not, the most authoritative organ of the modern Church–it carries substantial power.”