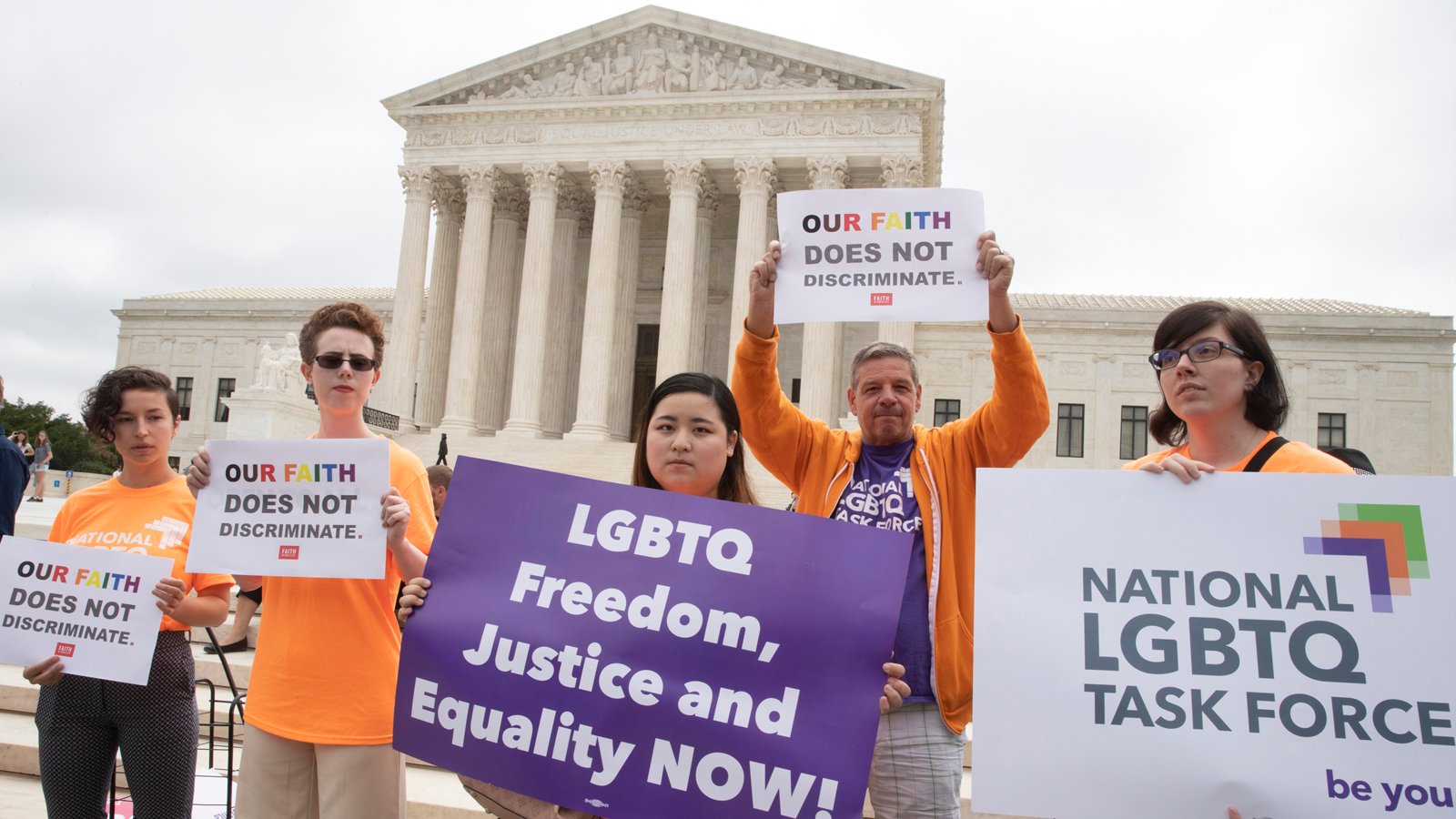 American Civil Liberties Union activists demonstrate in front of the Supreme Court, Monday, June 4, 2018 in Washington. The Supreme Court has ruled for a Colorado baker who wouldn't make a wedding cake for a same-sex couple in a limited decision that leaves for another day the larger issue of whether a business can invoke religious objections to refuse service to gay and lesbian people. (AP Photo/J. Scott Applewhite)
June 29, 2018
Jacob Lupfer

(RNS) — As Americans pause on July 4 to celebrate the anniversary of their independence, the world’s oldest democracy should take stock of its ongoing debates over religious freedom. A cornerstone of the Bill of Rights, the First Amendment's guarantee against coercion in matters of belief and conscience is an American birthright and a gift to everyone.

While untold millions suffer under repressive regimes that restrict freedom of belief and conscience, Americans contest religious freedom as though it were a matter of life and death. In recent days, Supreme Court rulings on a travel ban, abortion and other hot-button issues inspired joy and sorrow alike among advocates, partisans and everyday citizens who perceive their fundamental rights to be at stake.

So where do we Americans stand when it comes to religious liberty? Are we entering a new phase around the issue? We hear the loudest cries from professionalized interest groups, but what does religious freedom mean in everyday American life?

The cultural acceptance and legal codification of the sexual revolution has partially recast religious liberty as a safeguard for social conservatives. They appeal to the First Amendment, delighting in the concept of religious freedom as they uphold their religious beliefs about the purposes of marriage and sex. Such is the case for business owners who serve LGBT customers but who can't in good conscience lend their craft to celebrate unions they believe are not marriages.

Religious conservatives’ delight in religious liberty leads to progressives’ squeamishness about the concept. Many progressives worry that religious freedom gives license to ignore duly enacted laws and is a smokescreen for discrimination against protected classes. Human Rights Campaign, for example, frames Title IX exemptions for faith-based colleges and universities as an example of "hidden discrimination" against LGBT students, not a legal protection for genuinely held beliefs about human sexuality.

In the three years since Obergefell v. Hodges mandated legal recognition of same-sex unions as marriages, there has indeed been a clash between LGBT rights and religious freedom. But it is not insurmountable, and we should put it in context. Social conservatives generally accept that same-sex marriage is the law of the land. Their efforts are now aimed at making sure that LGBT rights do not infringe upon their own beliefs and practices in churches and faith-based institutions.

The problem arises when U.S. Christians — the majority religion in one of the world’s freest countries — sanctimoniously act like they are being persecuted, especially without acknowledging the treatment LGBT people have received. But social conservatives are, for now at least, losers in a culture war even as they retain considerable social, political and economic clout. From a culture-war perspective, the religious liberty debate amounts to a debate over how badly the winners can punish the losers. For example, should a wedding vendor who declines to serve a same-sex couple be socially shamed? Forced out of business? Imprisoned?

While same-sex marriage is now among the constellation of issues that generate conscience claims among social conservatives, these cases are still likelier to involve abortion or contraception, as they have for decades. In that timespan, the courts have generally ruled that people should not be forced to participate in activities forbidden by their religion.

But the religious freedom clause is by no means the exclusive concern of conservatives. From Massachusetts to Michigan to California, people of faith have invoked religious freedom to defend actions more commonly associated with progressive religion. A Unitarian parish in Bedford, Mass., put environmentally friendly solar panels on its 200-year-old meetinghouse. When a zoning board cried foul, Unitarians invoked religious freedom, as they believe in sustainable alternatives to practices that contribute to climate change. Likewise, interfaith groups in California and Michigan were inspired by a faith-fueled coalition in Seattle to build tent cities for homeless people. The groups relied on religious-liberty defenses when local government prohibitions stalled the projects.

While contemporary debate is often polarized, the truth is that there are lessons to be learned on both sides.

Religious conservatives need to realize that they are not the only ones who believe religious freedom is a sacred right. And progressives, whether religious or not, should not dismiss the concept outright.

The social changes brought on by changing attitudes about sex and marriage are far-reaching, and we have barely scratched the surface of examining unintended consequences. Thus, along with this revolution has come increasing religious freedom demands from the sexual revolution’s dissenters.

Religious convictions need to be respected. We need to be as generous as possible to people who believe that marriage is between a man and a woman and that sexual relations are properly reserved for such unions. Opposition to contraception, abortion and same-sex marriage are normal tenets of major world religions. That is not going to change.

Further, we should all celebrate our freedom from coercion in matters of belief. We should extend this freedom as graciously and widely as we can. To the greatest degree possible, we should not compel fellow citizens to act against their consciences.

The debates will continue, as they should among free people striving to form a more perfect union. But on Independence Day, let us remember that religious liberty is not a bludgeon but a birthright. Everyone can appeal to the First Amendment, and that’s something we can all celebrate.

(A frequent commentator on religion and politics, Jacob Lupfer is a writer and consultant based in Baltimore. The views expressed in this commentary do not necessarily represent those of Religion News Service)