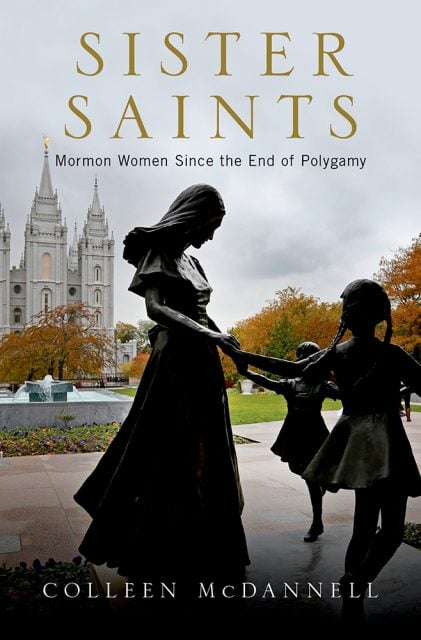 (RNS) — Mormon women have come a long way, according to Colleen McDannell, professor of history and Sterling M. McMurrin Professor of Religious Studies at the University of Utah.

That’s one overall takeaway from McDannell’s outstanding new history, “Sister Saints: Mormon Women Since the End of Polygamy,” which just came out from Oxford University Press.  Mormon women, McDannell says, have made the transition to the 21st century with considerable strength and agency — and even find power in some unexpected ways (like fighting against the Equal Rights Amendment, ironically).

I hope the book gets a wide readership. It’s not only carefully researched but accessibly written, which is frankly not something I can say about a lot of academic books. It’s filled with compelling stories and “wait, what?!” bits of historical detail. You could actually give this to your Relief Society president for Christmas — and I hope you will.

McDannell and I spoke recently about the book. The conversation has been edited for length and clarity.

You chronicle several changes from the 1980s to the present that have changed life for Mormon women, the first being birth control. How did that happen?

As is typical with much of Mormon history, Mormons and non-Mormons start out the same. At the turn of the 20th century, you have lots of people condemning the beginnings of the birth control movement.

But by the time you get into the 1960s and 1970s, the rest of the country begins to be concerned about overpopulation. They find birth control methods that are efficient and mostly healthy, and married people start using birth control to control the spacing of their children. If you can control when you have children, that allows you to work or go to school or plan your life.

But Mormons and Catholics did not see giving women the chance to plan their lives as having a high value. The 1976 LDS Handbook says that it’s contrary to the teachings of the church to artificially curtail or prevent the birth of children, and that anyone who does so will “reap disappointment.”

So up until the 1980s in Mormonism, there were condemnations from church authorities about birth control and small family sizes. But the language in the handbooks gradually becomes softer. And then in 1998 the church removes those harsh restrictions and basically says, “This is a decision between the couple and God.” And it explicitly says it’s no one else’s business.

It’s important that it’s seen as a decision between the couple and God; it’s not just the woman’s decision. I think one thing that distinguishes Mormonism from secular humanism or liberal Protestantism is that this is a community decision, not an individual one. But birth control is a shift that allows women to plan.

That’s not to say that childbearing doesn’t continue to be important in the LDS family, even if Mormon families are smaller now. Most LDS people continue to enter marriage with the assumption that children will be part of the family.

I was fascinated to read that one of the major changes to the temple endowment ceremony in 1990 was the removal of the part about Eve’s punishment. You argue that this was also a positive step forward for Mormon women.

Yes. In the 19th century, even though there was this idea of the “Happy Fall,” Mormons basically understood the Garden in the way that Protestants and Catholics did: that there was a curse. And that was in the temple rituals, played out clearly with specific curses for Adam and Eve.

But then when the temple ceremony was revised in 1990, the curse of Eve was dropped. The bad things that happen for everyone are still there — weeds, thorns, it being hard to work. But Eve having to suffer in childbearing, or needing to be ruled by her husband, drops out.

And I am told that in the current temple ceremony, even though the language has not been changed, the dramas show an Eve who is more in control and looks less like the cause of the problem. She seems to have more of a sense that eating the fruit is something important that has to be done, and that she is facilitating a positive change, rather than being punished for doing something negative. Theologically, that seems to fit with the LDS understanding of what happened in the Garden, but this is actually a pretty recent understanding. So the temple ceremony is becoming attuned to a different way of understanding the differences between men and women, and how that relates to the plan of salvation.

Another change you track is that top LDS leaders stopped issuing public condemnations of women in the workforce. What do you think was behind that?

I think there is a shift from emphasizing women to emphasizing the family. From the 1950s up through the feminist movement up until the early 1990s, there’s a focus on women’s behavior and what that means for the family.

But when the church begins becoming a global church after 1978, leaders realize that while in the U.S. you might be able to have a line that tells women to stay home with their children, it doesn’t work in Ecuador or Ghana or Mexico. Women there work in jobs that are dangerous and hard, and they don’t do it because they’re looking for self-fulfillment. They’re feeding their families. They are the financial center of these families. So if you are a leader trying to be in any way realistic in dealing with a church that’s growing in the Southern Hemisphere, you have to pay attention to women who work.

So you shift instead to the family, and don’t focus so much on women in particular.

You point out that one way Mormon leaders shift away from women and toward the family is that in the 1995 Proclamation on the Family, they don’t explicitly define gender roles. Women are nurturers and men are providers, but that’s about all we hear.

This is a big shift. Once you get rid of the Relief Society Magazine and you realize that Mormonism is global, then it becomes trickier to lay out specific gender roles for men and women. What are the appropriate behaviors of men and women? Leaders choose broad, general ideas that have a feeling of being core values. Nurturing and protecting become two of these core values. But what does it mean to nurture? Does someone in Sandy, Utah, nurture differently than someone in Johannesburg? Leaders don’t want to go there. They take out the specificity so that the Proclamation makes sense globally.

So this opens up a space for women?

I think it opens up a lot of spaces. Women can create a nurturing world that fits whatever model they think is nurturing. If that means staying home and saving money by making all your own clothes, that’s one way. If it means that you have your children in day care and you get takeout on the way home because you can play with the kids instead of cooking, that’s another way. The content of how you nurture becomes less important than that you do it.

The problem Mormons have with the Proclamation is not so much about gender as that it is a profoundly heterosexual worldview. The divine binary is so strong that I cannot see how they’re going to get out of it. That’s a core element that is different from other religious traditions.

One final question. I was struck all through the book by your examples of Mormon women exercising their agency and lobbying for changes, even if those changes in hindsight would be considered conservative or preserving the status quo. Relief Society President Barbara Smith approached Thomas Monson in 1974 about opposing the ERA. That was not a story I had heard before — that the church’s opposition originated with the actions of a woman. You also cite Elaine Cannon lobbying for the Young Women to have religious instruction, not just crafts. So many examples. And then you close the book by stating that the future of the next generation of Mormons will be determined by women.

In general, religion is determined by what women do, because in most cultures, women socialize the next generation. Many families talk about how dad might sleep in on Sundays and Mom would take the kids to church. It’s part of an American way of understanding religion. This doesn’t hold up in places like Asia, where patterns are more determined by men. But in America since the 19th century, religion has been feminized. So if Mormon women stop showing up, that stops this movement from generation to generation.

I’m seeing middle-aged women raising their children and then just dropping out of the Mormon tradition, and not engaging anymore. Maybe they feel they have done their job. If you want my two cents, I think the church really needs to pay attention to where women have issues with the church, and see that their issues are heard, and that women are taught how to speak up. Mormon women often don’t know how to assert themselves in a direct way that men will recognize, and men need to be trained to recognize women’s religious authority.