Remember how the Tax Cuts and Jobs Act of 2017 imposed a tax on churches and other non-profits as a way of (slightly) making up for all the revenue it would be giving back to rich people? Well, the outraged protests were so great that the still-GOP-controlled House Ways and Means Committee has come up with a new bill to undo it.

Turns out the cure is worse than the disease. Surprised?

The tax has to do with those parking spaces designated for the pastor, rabbi, youth minister, etc. And with those exercise rooms where employees can work out free of charge. And with places like New York, where nonprofits with more than six employees are required by law to underwrite their transportation to and from work.

Whether they pick up the tab for these benefits directly or permit employees to deduct the cost from their reported income, non-profits are now required to report them as “unrelated business income” and pay taxes on their value. Apart from the money, the law obliges many organizations that have never filed tax returns to do so.

When all this dawned on the affected parties, they made a hue and cry, such as by way of a letter to the relevant congressional leaders from the Southern Baptist Convention’s Ethics & Religious Liberty Commission that was signed by representative Catholics, Lutherans, Jews, Mormons, Scientologists, you name it. Not since the RFRA coalition of the early 1990s has such a rainbow coalition of religious bodies banded together in a single cause.

And the IRS responded with “guidances” that seek to minimize the impact of the law. Guidance 2018-99 says that if you remove the parking signage for employees by March 31 and if half the spaces are available to non-employees, then there’s no need to pay the tax. Guidance 2018-100 waives the penalty for failing to file quarterly payments.

But significant tax obligations, such as for the transportation benefit, remain. Ergo the new bill, which was rolled out earlier this month.

Lo and behold, it includes repeal of the so-called Johnson Amendment, the provision of the tax code that bars non-profits from partisan politics. As noted in this space a year ago, that would fundamentally alter the entire non-profit world, and not in a good way. In one fell swoop, it would permit issue-oriented 501(c)(3)s to engage in electioneering as part of their advocacy work and receive tax-deductible contributions to do so.

Repeal of the Johnson Amendment—a devout wish of President Trump’s—was part of the House’s original tax bill but the Senate kept it out the final version. Now it’s back. Other goodies from Ways and Means are removal of an excise tax on coal that pays for treatment of miners suffering from lung disease and insertion of a provision allowing “unborn children” to be designated as beneficiaries of 529 education-savings accounts.

As Congress and the Administration struggle with keeping a large piece of the federal government open, there seems little likelihood that the tax revision bill will go anywhere. Let it rest in peace as another last-ditch effort of Republican dead-enders.

In just a couple of weeks, the new Democratic House can pass a tax revision bill with the necessary fixes, the Senate will give its thumbs up, and President will sign it into law—or face his first veto override. 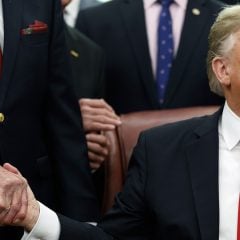 Opinion
Why the Johnson Amendment is always debated and never repealed 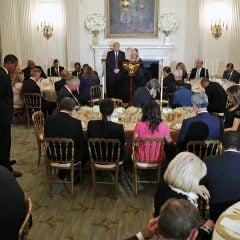 Opinion
Trump’s evangelical pander: a sin or a violation of law?