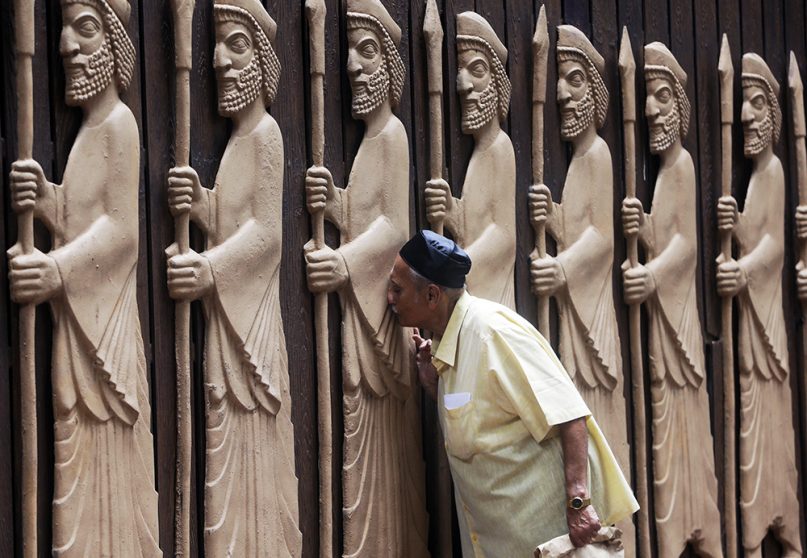 A Parsi man offers prayers at a bas-relief of ancient priests at a fire temple on Navroze, the Parsi New Year, in Mumbai, India, on Aug. 17, 2018. Parsis, also known as Zoroastrians, are followers of the Bronze Age Persian prophet Zarathustra. (AP Photo/Rajanish Kakade)

MUMBAI, India (RNS) — Farzad Irani, a physical therapist born and raised in New York, tucked into a plate of mutton dhansak and egg chutney pattice, happily reacquainting himself with Parsi cuisine as part of a 15-day trip through western India intended to stir up his connections to his ethnic and religious identity as a Zoroastrian.

Irani had last visited Mumbai as a 12-year-old, when he’d undergone his navjote, the traditional Zoroastrian initiation ceremony. This time he’d returned with Return to Roots, an organization that hopes to connect young Parsi and Irani Zoroastrians to their heritage, partly in hopes of reviving a community that once thrived in and around India’s largest city.

“I thought it could be cool,” said Irani over lunch after a visit to the Dadar Athornan Institute, where Parsi priests are trained. “It would be different from my normal vacations. I wanted something more spiritual, more educational, to learn where we came from.”

According to legend, Zoroastrians arrived by boat on India’s west coast between the 8th and 10th centuries, fleeing religious persecution in Persia. They found refuge, quickly integrating with the local population by adopting the Gujarati language and local customs, while steadfastly hanging onto their religious beliefs. That first wave became known as Parsis; a second wave, arriving in the 19th century, became another subset called Iranis.

Since then, they have flourished as a successful, well-educated minority, producing some of India’s most prominent merchants, lawyers and doctors. 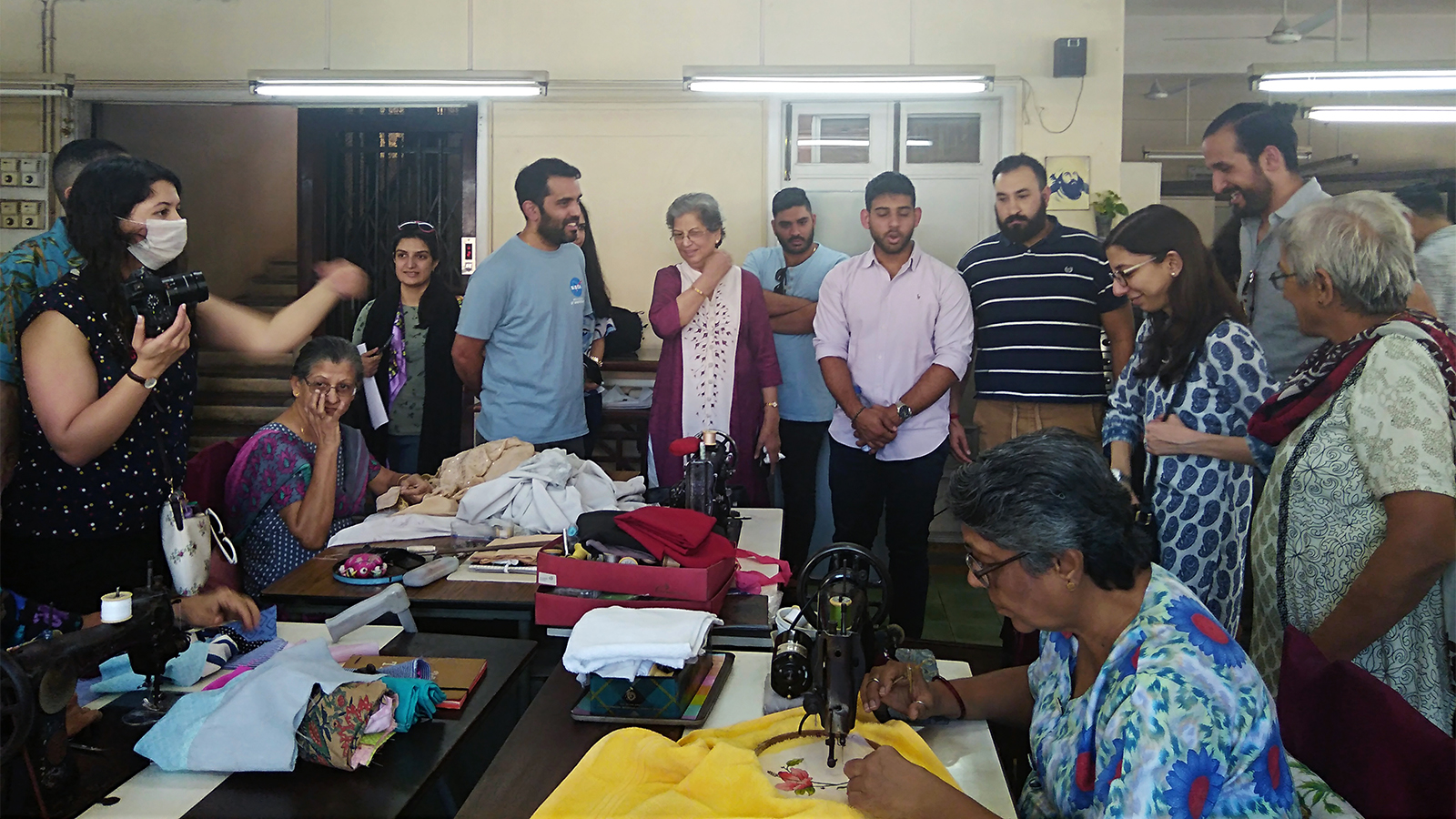 Participants on a Return to Roots trip learn about embroidery being sewn on garments while touring the Ratan Tata Institute in Mumbai, India, on Dec. 21, 2018. RNS photo by Bhavya Dore

But with later and fewer marriages and lower fertility rates, Parsi and Irani numbers have fallen in the past three decennial Indian censuses — just 57,264 in 2011, compared to 100,772 in 1961 — prompting fears that the proud minority may soon disappear. It’s estimated that there are as many as 40,000 Zoroastrians living outside India.

Inspired by Birthright Israel, a 20-year-old organization that brings diaspora Jewish youngsters to the Holy Land, Return to Roots is designed to help young Zoroastrians fortify connections and engage more deeply with the endangered culture.

“We thought, ‘Why don’t we have something for Zoroastrians?’” asked Arzan Sam Wadia, Return to Roots’ program director. “How do we create a whole package of experiences that touches everything from history and culture to food and entrepreneurship and meeting their peers?”

Return to Roots’ two-week tours include meeting priests, homes and restaurants, worshipping at local fire temples, checking out heritage and culture, and exploring contemporary debates within the community. 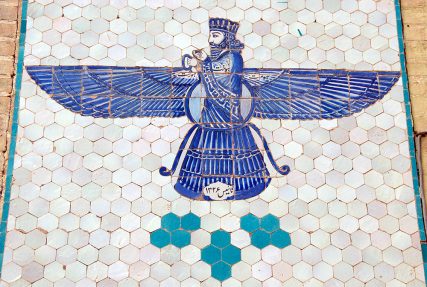 A glazed tile depiction of Farohar, one of symbols of the Zoroastrian faith, in the town of Taft, Iran. Photo by A. Davey/Creative Commons

Irani, 29, who was raised Zoroastrian, met fellow believers during the Zoroastrian Youth Congress, held every four years in locations around the globe, or the biennial Zoroastrian Games. “Winning gold medals is one thing,” he said, chuckling. “Learning this stuff is another.”

Karl Raghina, sitting across the table, was also familiar with the basic contours of his faith, but growing up in California largely severed him from the community. “It’s nice to see things we have heard about,” said Raghina, 35, an engineer from San Diego.

Return to Roots fellows must be between 22 and 35 years old and are selected based on an application. Unlike Birthright Israel, which is partly government-funded and completely free, Return to Roots depends entirely on private donations. The cost of the trip for the fellows is about $1,000 plus airfare.

So far five trips have brought 81 young people from at least eight different countries, including the U.S., U.K. and United Arab Emirates.

“It brings a renewed sense of being Zoroastrian and what that means,” said Wadia, who lives in New York. “The aim is to provide the tools for what it means to be Zoroastrian. If people don’t live in India and soak those things up by osmosis, sometimes they don’t know them.”

Kayras Irani, a 32-year-old Canadian who now lives in New Zealand, was on his fourth tour, his third as one of five volunteers organizing the trip. He grew up going to a Zoroastrian fire temple and taking religion classes but, he said, “I connect at a deeper level each time.”

The Return to Roots tours generally begin in Mumbai, where the largest numbers of Zoroastrians still live, and visit Udvada, home to one of the most sacred fire temples, and Navsari, home to rural Parsi communities. 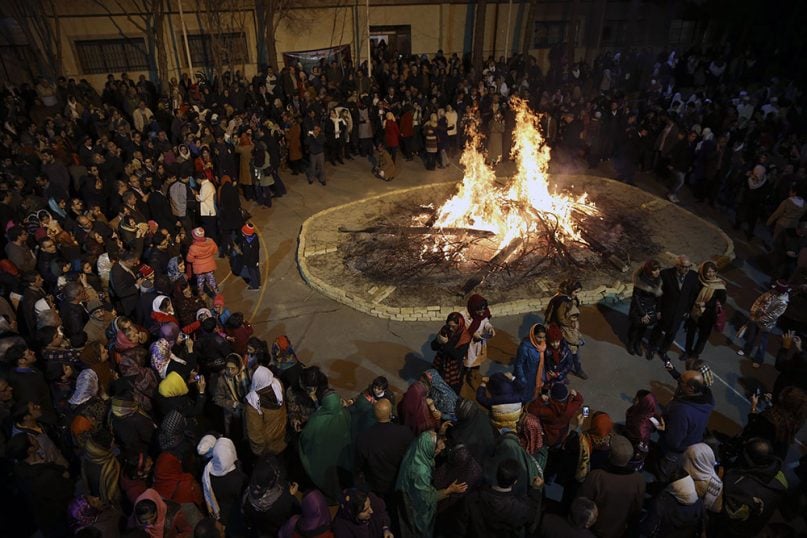 Iranian Zoroastrians gather around a giant bonfire in a ceremony celebrating their ancient midwinter Sadeh festival in Tehran, Iran, on Jan. 30, 2015. Sadeh, the feast of creation of fire, has been observed since the ancient days when Zoroastrianism was the dominant religion in the powerful Persian empire. (AP Photo/Vahid Salemi)

The organizers hope the itinerary eventually will extend to Iran, where Zoroastrianism, considered the oldest monotheistic religion, originated 4,000 years ago. For now, the antagonism between the United States and Iran puts the country off limits for most American participants.

“It gave me greater self-confidence and enlarged my outlook on my religion and culture,” said Cyrus Karanjia, 23, a freelance graphic designer from Karachi, Pakistan, home to some 1,400 Zoroastrians. “It changed my understanding toward my identity.”

If Parsis are a minuscule minority even in India, that sense of being set apart is amplified abroad, where there may not be other Parsi families, let alone fire temples.

“I felt disconnected,” said Ava Damri, 32, who lived in Auckland before moving to Dallas. As a teenager, Damri stopped wearing the sacred thread and vest that believers receive on their initiation. By the third day of the trips, she was already reconsidering as she got a better understanding of the rituals.

“I used to be very proud to say I am a Zoroastrian,” said Damri, “but I could not give more than surface-level answers about it.” 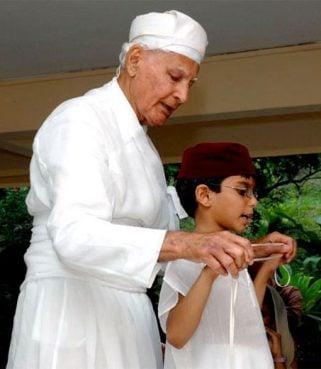 A Zoroastrian priest instructs a child in tying the Kushti ritual garment during the navjote ceremony. Photo courtesy of Creative Commons

The firsthand knowledge also helps others understand their faith. “We are always a minority, but we need to have a knowledge of our own culture before we can educate others,” said Karanjia. “I improved my understanding of my own background, so I can answer questions about it better.”

Return to Roots also stresses an urgency about sustaining the Parsi and Irani populations. One evening, the group attended a talk where the tour leaders talked about an 18 percent drop in the Indian Zoroastrian population between 2001 and 2011. A government program launched in 2013 offers financial assistance for less well-off couples who want a child, under which 172 babies have been born so far. This month new incentives, such as a senior citizen honorarium for child care and creche and child support, were launched.

Some more liberal Zoroastrians are skeptical of such measures, calling the government’s help a myopic scheme that reduces women to baby-makers. They advocate for reforms that would allow the children of Parsi women who marry outsiders to be accepted, as the children of Parsi men married to non-Parsis already are.

Though its advertisements exhort people to marry young and within the community, Return to Roots doesn’t play matchmaker among its participants and Wadia says the discussions are intended to be informative, not evangelical. “No topic is taboo,” he said. “They may or may not agree with [some things] but at least they understand [what is happening].”

Still, if romance blooms during the fortnight, no one would complain. Past trips have yielded a few couples. “When you get young people to meet in an organic setting … ,” said Damri, laughing as she trailed off.