WASHINGTON (RNS) — As former religious freedom ambassador Suzan Johnson Cook stood before a class of black theological students, one raised his hand to ask her if it had been challenging to work with atheists and agnostics.

“It’s not about what I believe or what I think you should believe,” responded Johnson Cook, the first African-American and clergyperson in the State Department post. “It’s about you have the right to believe or not believe.”

Gathered Tuesday (Jan. 8) around five round tables in a studio of the Newseum, 35 students from religious graduate schools at historically black colleges and universities attended the first session of a four-day intensive class on religious freedom. They were there to learn the lessons and lingo of a field that has traditionally been predominated by white men. The new pilot course is part of a partnership with the theological school of Virginia Union University and the Religious Freedom Center, a nonpartisan initiative of the Freedom Forum Institute. 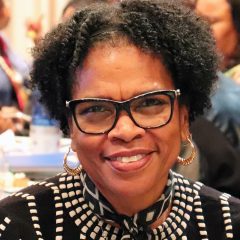 The three-year program is funded by a $450,000 grant from the Luce Fund for Theological Education.

“I thought I had it down pat at this point,” said Davis, who also is a student at Payne Theological Seminary.

Corey D.B. Walker, former dean at VUU’s Samuel DeWitt Proctor School of Theology and a consultant on the project, said the partnership aims to help African-American students learn about the range of views on religious freedom in a religiously diverse and “religious averse” country. Those perspectives are shaped by everything from declines in traditional Christian church attendance to increasing Muslim populations from the African diaspora to statements by Church of God in Christ Presiding Bishop Charles E. Blake Sr. defending the right to oppose abortion and gay marriage.

“We have to train the next generation of religious leaders to be very fluent in understanding this contested terrain,” said Walker, now a visiting professor at the University of Richmond, in an interview.

On-site at the Newseum, members of the teaching team cited examples of people of color in the history of religious freedom, including the Ethiopian eunuch in the New Testament Book of Acts, who converted to Christianity, and Underground Railroad conductor Harriet Tubman, who led escaping slaves to freedom.

“She literally took families to a place where they could live more freely, both religiously, physically and mentally,” the Rev. Angelique Walker-Smith, senior associate for Pan-African and Orthodox Church engagement at Bread for the World, told the students. “So we owe so much to Harriet Tubman for being a champion for religious freedom of our people.” 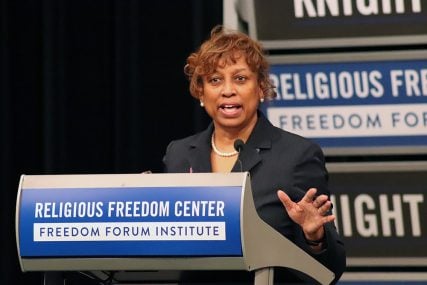 The Rev. Angelique Walker-Smith speaks at a Religious Freedom Center class for black theological students on Jan. 8, 2019, at the Newseum in Washington, D.C. RNS photo by Adelle M. Banks

At an October launch event for the project, which featured black scholars discussing race and the “politics of belonging,” course organizer Sabrina Dent recited the names of the four girls killed in the 1963 bombing at the Sixteenth Street Baptist Church in Birmingham, Ala.

“They represent the innocent children who are impacted by racially motivated terrorism that impacts the religious liberty of African-Americans,” said Dent, a graduate of the VUU theological school and former fellow of the Baptist Joint Committee for Religious Liberty.

Students took notes Tuesday on laptops and notebooks as they learned about “countries of particular concern” — the State Department’s designation for the most egregious religious freedom violators — and brainstormed ways they could apply  the principles they were learning in their congregations and communities.

Itihari Toure, institutional effectiveness director at the Interdenominational Theological Center, cited the example of “Project Blitz,” an initiative by the Congressional Prayer Caucus Foundation that wants to see “In God We Trust” displayed in public buildings.

“Some of us — not calling names — might say, ‘I don’t see anything wrong with that. God’s good,’” said Toure, who teaches at a consortium of African-American seminaries in Atlanta. “But that’s one group’s tradition. And what happens when you begin to impose one group’s tradition on everybody?” 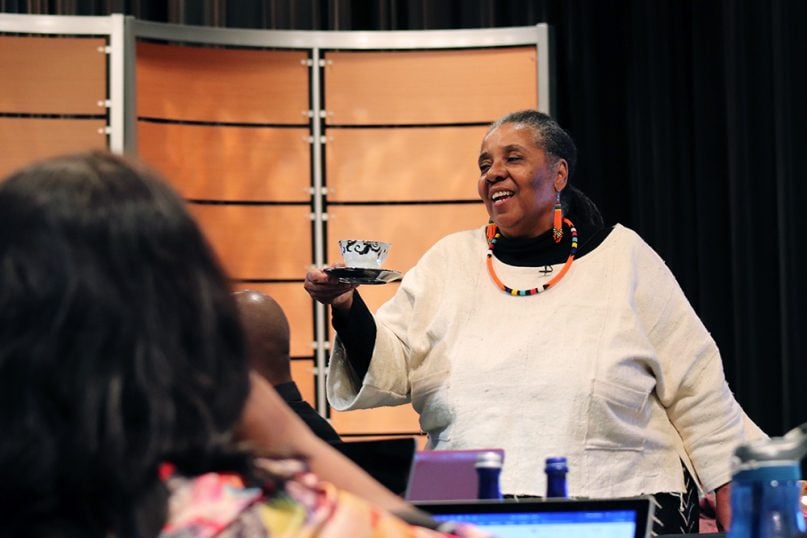 Itihari Toure, institutional effectiveness director at the Interdenominational Theological Center, discusses how different kinds of cups can represent inclusion during a Religious Freedom Center’s class for black theological students on Jan. 8, 2019, at the Newseum in Washington, D.C. RNS photo by Adelle M. Banks

As a metaphor for advancing religious liberty, she started a class discussion of different cups — from a handcrafted wooden one to delicate china to a shot glass — she had placed on a ritual table near the front of the room.

“When we think about this notion of religious freedom and we think about the cups of life, what cups are on the tables that we set?” she asked. “Are we open enough, are we willing enough to consider some cups that may not have been a part of our lived experience?”

The class originally was slated to visit the Smithsonian’s National Museum of African American History and Culture, but it was closed due to the partial government shutdown. Instead, the group visited the “Slave Bible” exhibit at the Museum of the Bible. Lecturers from the African-American museum and the Baptist Joint Committee were also scheduled to address them.

Tisa Wenger, whose 2017 book “Religious Freedom: The Contested History of an American Ideal” was cited several times during the first session, said she thinks the class is unprecedented.

“It’s certainly exciting and I think broadens out the conversation on religious freedom in productive ways,” the associate professor at Yale Divinity School told Religion News Service in an email. 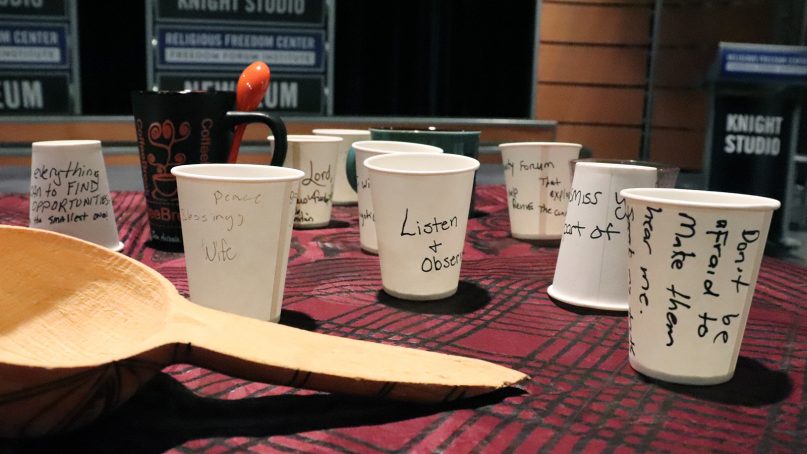 Students added “covenant cups” to a table of cups about inclusion during a class for black theological students on Jan. 8, 2019, at the Newseum in Washington, D.C. RNS photo by Adelle M. Banks

By the end of their first day together, the Christian and Muslim students, who must also complete online assignments and a final project, had already begun strategizing on ways they could make their own congregations more open to people with different beliefs and traditions.

The Rev. Tashara Void, a student at the Interdenominational Theological Center, said she’s thinking of ways to make the “monocultural” atmosphere of her African Methodist Episcopal congregation more multicultural. Void also is considering applying to the Baptist Joint Committee and White House fellow programs to continue to advocate for religious freedom.

“We have to live among each other,” she said of people of different traditions. “So we might as well learn how to get along with each other and, at the very least, just respect one another.”