By Jana Riess and Benjamin Knoll

In April, the Church of Jesus Christ of Latter-day Saints reversed an unpopular 2015 policy aimed at curbing the participation of LGBT church members and their children (see here for more background). Since the reversal, children of same-sex couples are once again eligible for baptism, and their parents are not subject to automatic disciplinary councils just for being in a same-sex relationship.

During the three and a half years the policy was in place, it was controversial—resulting not only in outside criticism but in internal dissent. Media coverage emphasized that the policy alone was responsible for causing thousands of people to leave the faith. In the Next Mormons Survey, though, we did not see dramatic evidence that the “LGBT exclusion policy” by itself resulted in widespread disaffection.

For starters, as has been reported previously, American Latter-day Saints were generally positive about the 2015 exclusion policy. Close to a year after its implementation, the NMS found that 71% of Mormons in the United States were either somewhat or strongly in agreement with the first half of the policy, which defined “same-sex marriage as apostasy and automatically trigger[ed] a disciplinary council.” Support for the second half of the exclusion policy, which denied baptisms and baby blessings for children of same-sex couples, was somewhat lower but still in majority territory.

For the near-third that did not agree, though, how did it affect their membership and activity in the Church?

This is a difficult question to answer because there are many different ways that opinions about the policy could have affected members’ relationship with the Church. While some took the drastic step of publicly resigning, others reported that they simply had to take a break for a time, while still others publicly or privately voiced concerns and disagreements while remaining active and committed Church members.

The NMS was fielded soon after the policy went into effect, making it difficult to estimate solely based on the survey the raw number of Latter-day Saints who left the Church over disagreement with the handbook policy change.

We do, however, have a better idea of how the policy change affected current members of the Church—specifically how it might have affected their confidence in their own long-term membership and activity.

The NMS specifically asked current self-identified members: “On a scale of 0–10, how confident are you that you will remain a committed Mormon throughout your life?” with 10 being “I am 100% confident that I will always be a committed member of the LDS Church” and 0 being “I expect that I will leave the LDS Church at some point.” (Not surprisingly, American Mormons are quite confident in their long-term commitment to the Church. The average answer was 8.3, with roughly half giving a full 10/10 level of confidence.)

When breaking this out by levels of agreement with the now-rescinded November 2015 handbook policy, however, we see a clear association:

It might be tempting to conclude from this that the LGBT exclusion policy had a huge impact on members’ long-term confidence and commitment, but the policy is of course not the only factor that influences a person’s confidence in their long-term activity and membership. Those who tended to disagree with the policy also shared other factors in common, like lower levels of certainty about specific doctrinal teachings and support for progressive policies on LGBT issues. To tease apart the independent effect of attitudes toward the policy from other related factors, we can use a multivariate regression analysis. (*See the end of the post for a full list of variables that were controlled for.)

What we find after this deeper analysis is that people’s views about the 2015 exclusion policy tended to occur as part of a “package deal” in concert with other factors. After controlling for those factors, the independent effect of the policy itself was small. Strong disagreement was associated with only about a 6% decrease in people’s confidence in their long-term membership and activity in the LDS Church compared to those who strongly agreed. 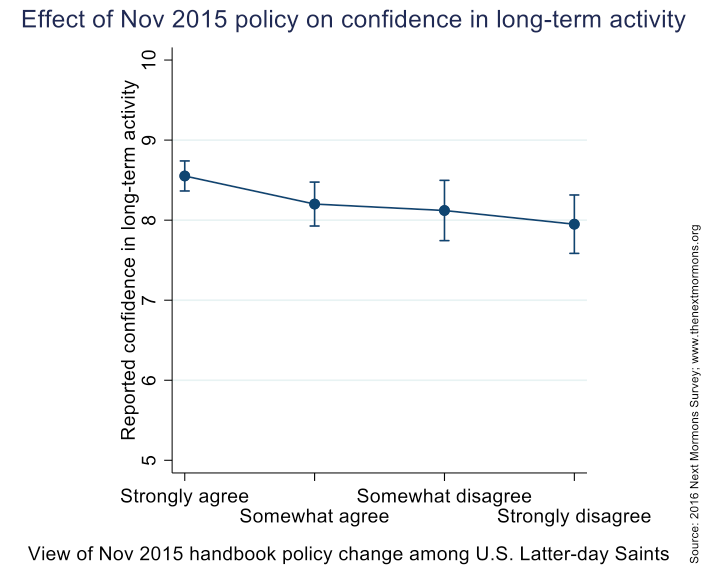 A 6% loss in confidence is not nothing, of course, but it’s not mass exodus material either.

Some people likely don’t want to hear this, but the NMS analysis suggests that many of those who resigned in the immediate aftermath of the 2015 policy change were likely not in every other way strong, active, and committed members before the policy was announced. Rather, it is more likely that this was for many the “last straw” in addition to other questions they had about Church policies and teachings.

The basic takeaway here is that the November 2015 policy was not enough by itself to drive many out of the church, but it functioned as one of several factors that, when added together, contributed to higher levels of disillusionment and disaffiliation. For some, particularly those who were already on the fence to begin with, this resulted in resignations and inactivity.

This is in no way to diminish the pain that the Church’s overall history of homophobia has had on current and especially former members. In the NMS data, “LGBT issues” in general emerged as an important reason that many former Mormons say they left the Church—particularly for Millennials, who ranked it third among thirty possible reasons. However, the specific exclusion policy that was in place from 2015–2019 does not seem to have operated as the driving force behind a mass exodus, as is often claimed.

* Control factors: For this analysis, we controlled for a person’s view on whether homosexuality should be encouraged or discouraged by society as well as their support for same-sex marriage because respondents’ position on the LGBT exclusion policy is strongly related their view on these issues. We also controlled for levels of belief in LDS Church teachings, frequency of church attendance, how many of their close friends and family members are LDS, convert status, political partisanship, and standard demographic variables such as age, gender, race/ethnicity, income, education levels, and whether they live inside or outside of Utah.