(RNS) How do Mormons and former Mormons feel about the LDS Church’s exclusion policy that branded same-sex Mormon couples as “apostates” and banned their children from baby blessings and baptisms until they are 18?

As we mark the policy’s one-year anniversary, I wanted to release some of the data from The Next Mormons survey, which I have been running, as it relates to how Mormons of different generations in the U.S. feel about the policy in particular and homosexuality in general.

Overall, 71% of current Mormons either “strongly agree” or “somewhat agree” with the first part of the policy (branding same-sex Mormon couples as apostates), with only 29% saying they disagree. 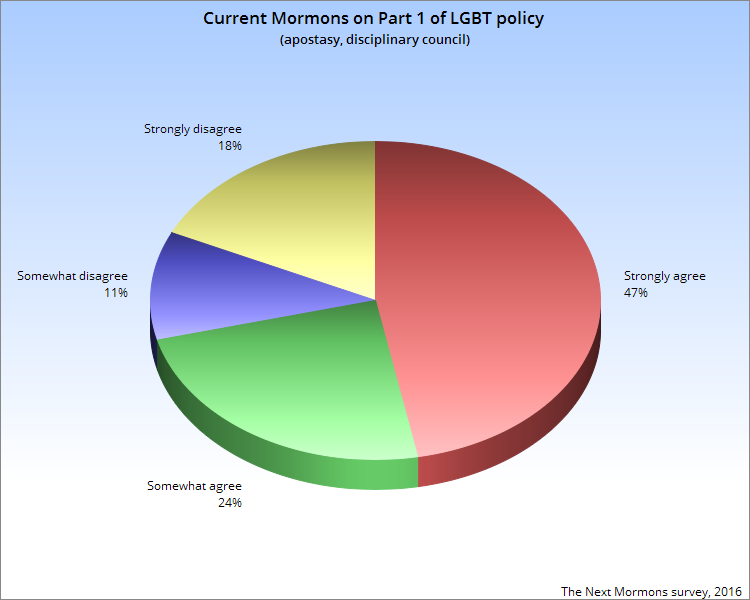 However, the nuances are worth exploring. When compared with people born before 1965, Millennial Mormons (young adults born from 1980 to 1998) show a drop of 18 points in the number who “strongly agree” that same-sex marriage should trigger a disciplinary council and possible excommunication. Members of Generation X are also considerably less enthusiastic about the “strongly agree” option than their parents. 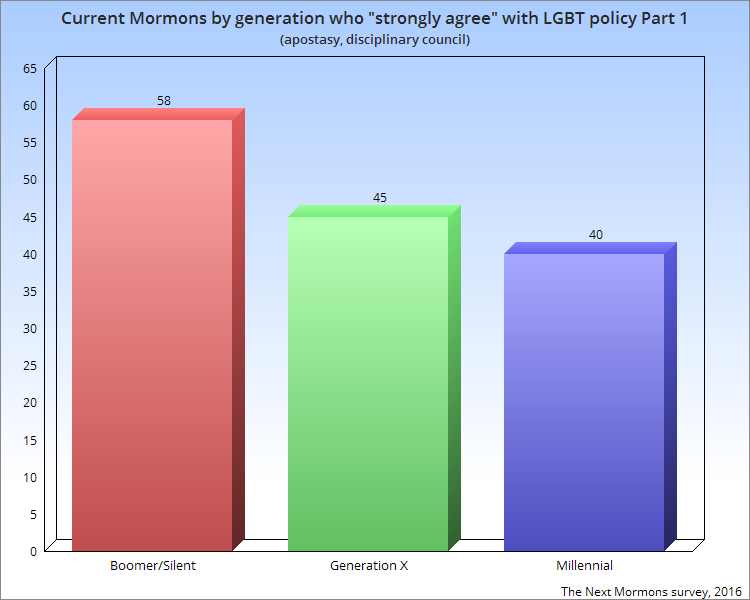 Overall, then, with the first part of the policy, the data show that Mormons predominantly express support, but that support gets weaker from one generation to the next. The Boomer/Silent generation respondents sound certain and confident in their agreement; the younger generations less so.

This generational divide becomes even sharper when we look at a different question: the percentage who agree that “homosexuality should be accepted by society.” This is a question that Pew Research asked in 2007 and 2014, so we have some data to which we can compare these answers.

Though Mormons as a whole have shown another double-digit jump since Pew last asked the question in 2014, Millennials are still the only generation of Latter-day Saints to crack 50 percent support: More than half say homosexuality should be accepted.

Among all current Mormon respondents, support for the policy is substantially less enthusiastic when we look at whether the church should bar children of same-sex marriage from baby blessings and baptisms.

Overall, there’s an 11-point drop among the entire active Mormon sample in the percentage of people who “strongly agree” (from 47% to 36%) and a 9-point rise in the percentage who either strongly or somewhat disagree (from 29% to 38%).

Much of this falls along predictable fault lines. Mormons who hold a current temple recommend are significantly more likely (55%) than others to say they “strongly agree” with barring children raised in same-sex families from blessings and baptisms. Republicans are twice as likely as Democrats to strongly agree (46% vs. 23%).

One surprise in the data was a nine-point gender divide. Two-thirds of men either strongly (37%) or somewhat (29%) agree with the the policy, but only 57% of Mormon women do.

In fact, 28% of active Mormon women “strongly disagree” with the policy about children — a 10-point jump from the men who say they strongly disagree. Another 14% of women “somewhat disagree.”

Considering that this is a policy that Elder Russell M. Nelson spoke of as “revelation from the Lord” in early 2016, it’s significant that 42% of active Mormon women — women we know from other data points are very orthodox in indices of religious belief — say they disagree.

A final observation: If active Mormons either strongly or somewhat agree with the LGBT policy, the opposite can be said for our smaller sample of former or inactive Mormons: Most of them hate it.

Sixty-nine percent of former Mormons either strongly or somewhat disagree with branding same-sex couples as apostates, and 77% disagree with barring those couples’ children from blessings and baptisms.

In both cases, the respondents who said they “strongly” disagree far outweighed the more tepid “somewhat” disagreement. 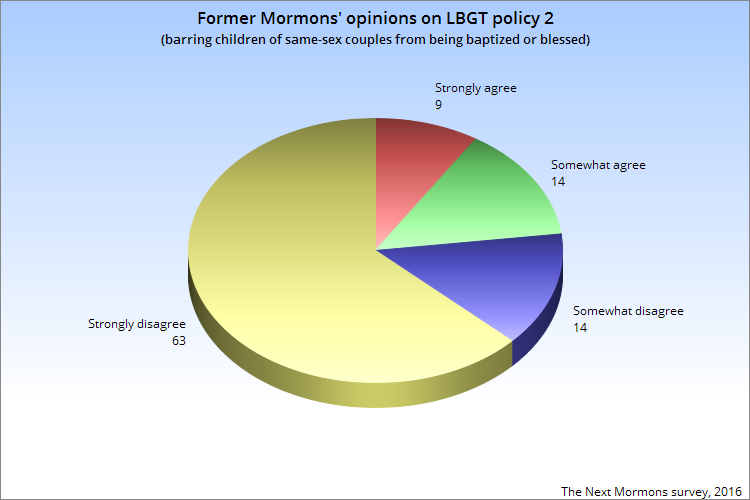 One interesting difference among the former Mormons is that for them, it’s not Millennials who are leading the way toward a gentler stance toward LGBT individuals; All generations in the former Mormon data have negative feelings toward both halves of the policy. In fact, the oldest former Mormons had some of the highest rates of disagreement with banning children from infant blessings and baptism.

Here’s something I wish we had asked in the survey but didn’t: how many people in the former Mormon sample became former Mormons because of this policy.

*February 16, 2017: This post was updated to reflect the percentages after “weighting,” a statistical technique that allows researchers to more accurately reflect a representative population.

(Jana Riess writes the “Flunking Sainthood” column for RNS and is working on “The Next Mormons,” a book project that includes a survey of Mormon attitudes on a host of issues)