CHICAGO (RNS) — Perhaps no item of clothing so immediately expresses a person’s values as a hijab. Why then, asks Hoda Katebi, do American Muslim women not take care to wear a hijab that is in line with their thinking about human rights and worker exploitation?

“Our clothes are so intimate to our bodies,” said Katebi, 24, an Iranian American community organizer whose popular political fashion blog and 2016 book, “Tehran Streetstyle,” has given her an international platform.

“What does it do to us spiritually if our hijabs are made in a sweatshop? Muslims care so deeply that our food is halal, that our investments are halal. And I don’t think anyone asked that question about our clothes.” Hoda Katebi laughs while holding the namesake for Blue Tin Production at the American Islamic College in Chicago on April 24, 2019. RNS photo by Aysha Khan

With her latest project, Blue Tin Production, Katebi is making sure that U.S. Muslim designers, Islamic clothing companies and their customers have a way to put their money where their morals are.

Billed as one of the country’s first clothing cooperatives run by refugee and immigrant women, Blue Tin aims to offer designers in the U.S. a transparently ethical manufacturing company, while creating well-paying work opportunities for skilled immigrant and refugee women – women like Mercy, a domestic violence survivor from Nigeria with mean sewing skills.

Mercy, who asked that her last name not be used, has worked in fashion since 1987. Back home in Lagos, she owned her own business, but after she moved in 2003 with her four children to Chicago, her husband wouldn’t allow her to work or go out. Mercy savored the small pockets of time she had to sew in their basement before he returned home.

Sixteen years later, she’s in a better place, having left her abusive husband and, against all odds, started a new business.

When Katebi hired her as one of three founding worker-owners of Blue Tin Production after a skills test, out of more than 100 other immigrant women, Mercy began crying with relief.

“Sewing is a gift from God,” Mercy said, feeding another yard of cloth through the teeth of her sewing machine. “When you have a gift, you have to use it for good. You have to use it to carry your community along.”

Her fellow worker-owners are a Kurdish-Syrian woman and a woman from Aleppo who came to the U.S. in 2016 with four of her children after her parents, husband, two siblings and one child were killed in the Syrian civil war. Both seamstresses requested that they not be named or photographed. 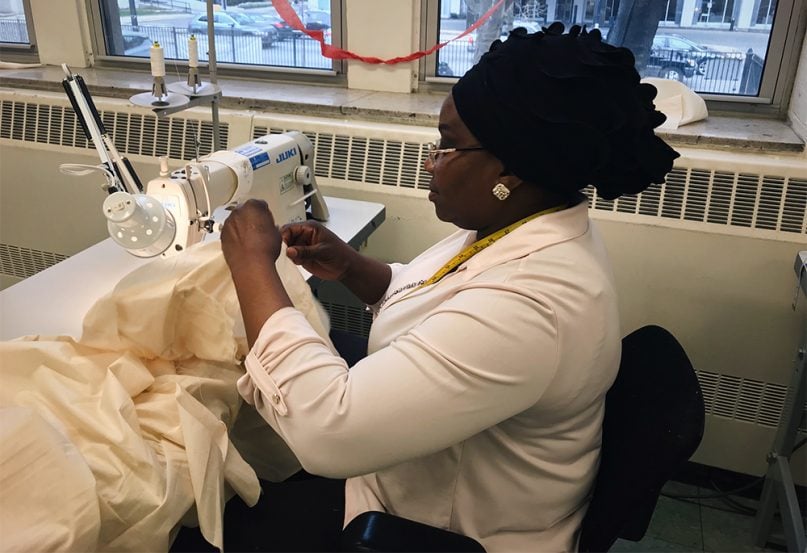 Mercy works on a garment in the Blue Tin Production studio space at the American Islamic College in Chicago on April 24, 2019. RNS photo by Aysha Khan

Mercy and her two colleagues make collective business decisions and receive fair wages, but many local Muslim professionals have donated their own time and money to make sure the seamstresses receive benefits, too, providing child care, transportation and health care, as well as translation and legal help.

All three worker-owners have volunteered to teach other women sewing skills so they can become employable. “We are like family here,” Mercy said. “It is a blessing to be able to give back.”

Katebi is clear, however, that her cooperative isn’t a charity. 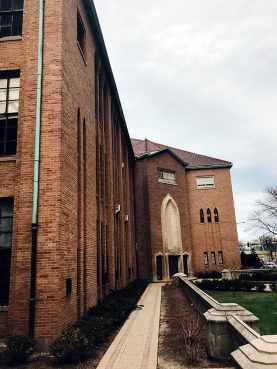 The American Islamic College in Chicago on April 24, 2019. RNS photo by Aysha Khan

Katebi decided to create the company — named after the iconic Danish butter cookie tins that immigrant women around the world use to store their sewing supplies — while researching manufacturers for her own ethical clothing line that would hold established brands accountable for their failures to invest in ethical labor practices.

She eventually realized that if she wanted to produce clothes in smaller batches that met her ethical standards, she would have to manufacture them herself.

Blue Tin Production kicked off its pilot phase in January and will fully launch later this year. The company is currently raising funds for industrial-level equipment to supply the clients, including at least one major national department store, already on Blue Tin’s waiting list.

Katebi, born to Shiite Muslim immigrants in Edmond, Okla., says she learned the power of fashion as a “global political language” from a young age. When she began wearing hijab in sixth grade, she was called a terrorist and was physically assaulted by classmates. She quickly lost all her friends and her self-esteem.

“Sometimes it was like, maybe if I wear enough Abercrombie & Fitch, I won’t get punched in the face,” she said. “Maybe they won’t look at me like I’m different.”

At the University of Chicago, where she began in 2012, she studied underground fashion, gender, imperialism and Iran. Her research became the basis of her blog, JooJoo Azad (Persian for “free bird”), and her book. When, in an appearance on a local Chicago TV news show she was made to defend wearing hijab and the Iranian regime, she was launched into internet stardom.

Blue Tin builds on efforts like the Artisan Sewing Cooperative in New York City, according to labor and economic justice lawyer Chaumtoli Huq, who heads the nonprofit [email protected]. Founded by former garment workers and organizers Zahida Raj and Rabeya Akter, the Artisan Sewing Cooperative has linked harsh labor conditions abroad with the economic conditions that make it difficult for U.S.-based immigrant women to find work.

“The whole business model in itself pushes wages down, which is why you see high rates of labor rights violations,” Huq said. “The fast-fashion model relies on cheap labor because the designs have quick turnover. So it’s a high-consumption, high-turnover and -production, and cheap-labor model.”

That doesn’t mean that clothing can’t be produced in Asia without exploitation, Huq emphasized, pointing to the decades of organizing that Bangladeshi women have done to push for living wages and to have their legal rights to on-site day care and maternity leave recognized.

In the U.S., however, Muslim activists often ignore labor rights issues abroad. Huq points to the fawning response of many Muslim writers to H&M’s first hijab-wearing model. In one post from the blog MuslimGirl.com, a writer said she hoped to see the model in more ads for other brands “who want to be bold enough to let Muslim women be seen.” 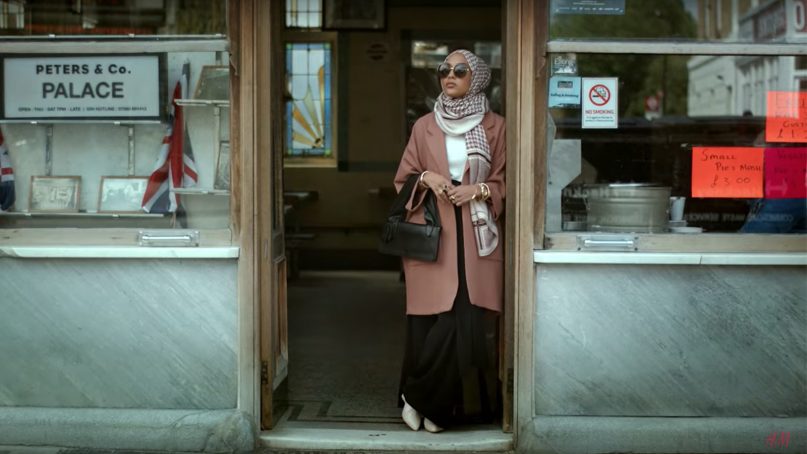 “Seeing all these Muslims rush at H&M and Zara is really heartbreaking,” Katebi said. “A lot of brands right now are trying to tap into the Muslim dollar by pretending they support Muslims.”

Katebi pointed to Nike as an example. Soon after she published a 2017 blog post titled “If You Use Our Faces Maybe Stop Killing Our People?”, the athletic wear company launched its Nike Pro Hijab.

Hijab-wearing social media influencers around the world immediately began posting selfies with the hijab, lauding the company for empowering Muslim women and working with Muslims during the design process. 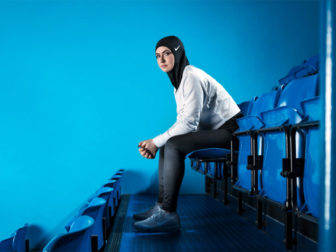 “What Nike has done for Muslim athletes is a dream that we never thought would happen,” one Muslim figure skater said. Just this week, the company’s first hijab-wearing model called for other major companies to follow suit with better representation of Muslim women.

But many fast fashion retailers, who mass produce trendy clothing as quickly and cheaply as possible, leave garment workers out of these conversations. Baptist World Aid’s annual Ethical Fashion Report criticized Nike for lackluster worker empowerment initiatives, transparency and traceability, and for not making moves to pay living wages across its supply chain.

While H&M and many other fast-fashion companies’ workers did receive the local legal minimum wage, those wages often constitute a fraction of a living wage. Other companies demand stiff production targets and piecework that endanger workers’ health and increase the risk of workplace accidents.

Companies, including H&M, routinely lay the blame for workplace abuse — including forced labor, child labor and sexual abuse — at the feet of subcontractors.

Nike and H&M didn’t respond to requests for comment.

Increased representation isn’t worth the cost of supporting the fast-fashion industry, said Katebi.

“It’s utterly disgusting to me to try to define what it means to be Muslim with just a hijab,” Katebi said. “For Muslims, as a global ummah (community), we are literally obliged by our faith to challenge oppression. Especially the Muslim community’s oppression.”

She points to a verse of the Quran that calls oppression a greater evil than even killing. “That’s literally what we’re doing, twice over – once so we can get cheap clothes and again so we can feel seen by a corporation,” she said.

The past few years have seen a slow awakening of many Muslims to these issues.

Muslim-owned clothing companies such as Veil Garments, Sukoon Active and Hijabican have committed to ethical sourcing and manufacturing practices, and many Muslim designers have asked to work with Blue Tin Production. Now, she’s reaching out to other Muslim companies to urge them to reconsider where they source their production.

“It’s a critical turning point for understanding garment workers as our community, as our ummah,” Katebi said.

Her hopes of creating a new sense of conscience are heightened because, she said, “Muslims are a little easier to guilt-trip. It’s easier to email a hijab brand and be like, ‘Yo, are you literally making Islamic clothing in sweatshops?'”