She began by naming a concern at the heart of Christian-Jewish relations. “It is not lost on me that it was a Presbyterian who helped with your capital campaign,” she said, “a Presbyterian who is one of your general contractors and Presbyterians who are hosting you during the transition.

“I think it is therefore worthy of note that we are not trying to make you Presbyterian!” she said, to laughter. “This is not some elaborate proselytizing initiative.”

But as she went on, Katie unexpectedly and poignantly addressed a difficult history.

“We are extending hospitality because we know that we stand in a tradition that has, at times, gotten it horribly wrong in relation to the Jewish community,” she said. “But hate and division, persecution, prejudice, violence and injustice are antithetical to the person and teachings of Jesus.

“If we can enact any gesture, however small it may be, to stand as a counterpoint to the shameful narrative that people who share our faith have helped forge, and in cases still forge today, this is the work that we want to be about and that we must be about.”

Many of us there that morning were moved to tears. 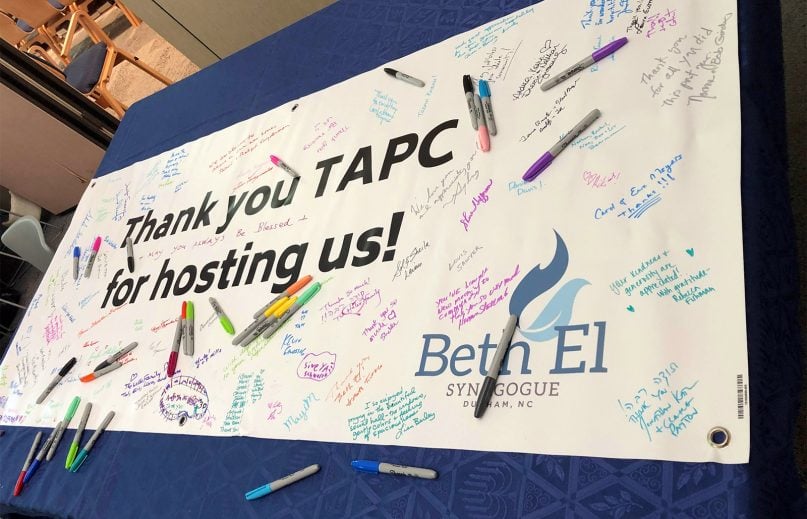 Beth El Synagogue and Trinity Avenue Presbyterian Church were brought together for the past 15 months by a mundane need: Beth El was undergoing a renovation, and we needed a place to hold Shabbat services. Trinity Avenue enthusiastically offered to host us, thanks in part to a friendship that had sprung up between the two of us, both relatively young clergy, both new to Durham.

But what unfolded during Beth El’s stay was beyond what either could have hoped. In an era when bigotry has caused synagogues, mosques and churches to be attacked and made to feel less than the sanctuaries they ought to be, we declare that a different narrative is being written by people of faith who refuse to let hatred and darkness have the final word in 21st-century America.

Being together created opportunities for us to act together. Our social action committees packed lunches for needy Durham schoolchildren, prepared workbooks for a local jobs ministry, sorted books for a local literacy project and co-hosted a fall festival with proceeds that included a gift by the church to a local mosque in honor of Beth El Synagogue.

Trinity Avenue Presbyterian became the first church we know of to host a Yiddish Song Festival, “What’s Not to Like?,” raising thousands of dollars to benefit local hunger relief. In February we joined a local black church for a lunch and discussion about the history and causes of housing segregation and racial inequities in Durham.

Being together also helped us learn about each other. For most of the year, Shabbat services were held in a social hall devoid of religious symbols, but for our bat and bar mitzvah services, we needed the larger main sanctuary. We moved our portable ark to the front of the room. A large cross hanging from the ceiling in front of the altar could not be covered, so when celebrations were held there — including my own son’s bar mitzvah — we were given the gift of being challenged to see the cross anew, as representing a chapter in Christian-Jewish relations different than before.

Some moments were fun and funny: Beth El’s love of sipping some scotch at our communal lunch after services led the church to reclaim the church’s Scottish traditions and temporarily suspend the no-alcohol policy on campus. Other moments were more poignant, as we shared sadness over synagogue shootings in Pittsburgh and San Diego.

As the year progressed, Beth El’s rabbi emeritus shared Judaism’s many stories about the Prophet Elijah and our unique way of reading Scripture — less as a problem to be solved and more as a mystery to be explored and enjoyed. On the second night of Passover — the night before Easter — Beth El families hosted Trinity Avenue members in our homes for Passover seders.

Jews have lots of uncommon rituals, new to Trinity’s congregants, and Jews don’t always understand Christian practices either. The many “why” questions asked in both directions and accidental offenses over the course of the year were received and answered with patience and good humor.

On a Sunday morning in May, Beth El held its annual meeting in the church social hall while the Presbyterians worshipped downstairs in their sanctuary. Our communities came together at noon as the Torah scrolls, the Jewish community’s most sacred objects, were removed from their temporary ark in the church for the final time as we prepared to march them home.

Katie shared with us these words, “My sense of what was possible for the human family under the banner of God’s love was expanded forever. We said at the outset of this adventure that one of the catechisms of the Presbyterian Church states that the chief end of humankind is to glorify and enjoy God forever. Looking back at this special season that we have shared together, I know that I speak for all of Trinity Avenue Presbyterian when I say that we have found ourselves more fully glorifying and enjoying God because of you.”

We proudly marched through the streets of Durham with our Christian brothers and sisters back to our newly renovated home.

Our procession sadly, but necessarily, included some off-duty police officers hired for protection, but the march reminded us again that a different narrative is possible in today’s America, one of peace, pluralism, tolerance — and hospitality.

Just days before Beth El moved into the church, Katie called with a question: A church member had purchased a mezuzah, the doorpost ornament described in Deuteronomy 6:9, “write (God’s words) upon the doorposts of your home and upon your gates.”

Not wanting to misappropriate a Jewish symbol, Katie asked if it would be an appropriate gesture of welcome to affix it to the Fellowship Hall. I was moved by the gesture but, as a Conservative rabbi, wanted to ground my response within the Jewish legal tradition.

In researching this question, I realized that it had no precedent in Jewish legal history. Rabbis had never been asked if a mezuzah could be affixed on a room of a church that was welcoming its Jewish neighbors to pray there for a year. We affixed the mezuzah that Sunday and, as we did, we recited a blessing of thanksgiving that we live in a time when such a question could be asked.

It is through this narrative that God is glorified, by building community across difference and, in doing so, building a better future for us all.

(Rabbi Daniel Greyber leads Beth El Synagogue in Durham, N.C., where the Rev. Katie Crowe is pastor of Trinity Avenue Presbyterian Church. The views expressed in this commentary do not necessarily represent those of Religion News Service.)

Opinion
Religious diversity is my day job. The Hamline Muhammad controversy isn’t easy.
Follow us on Facebook!
Submit your photos to RNS