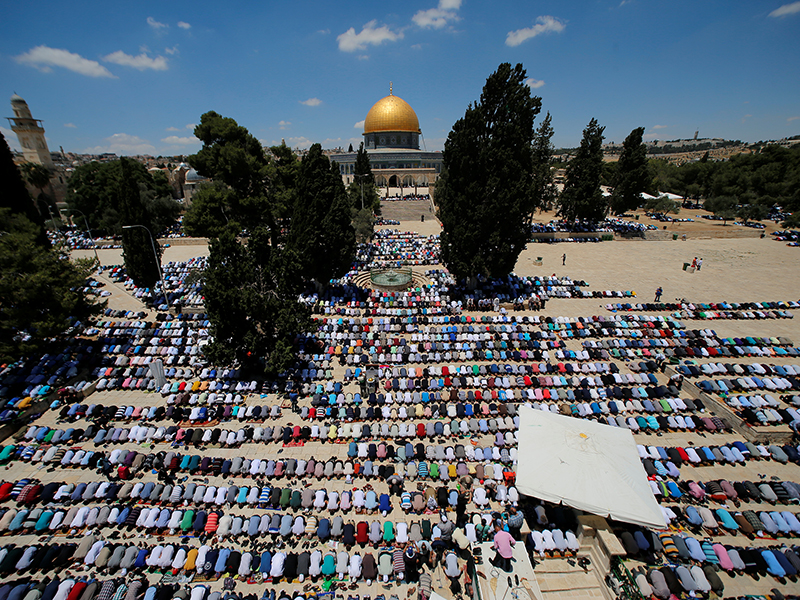 The Dome of the Rock is seen in the background as Palestinians pray on the first Friday of the holy fasting month of Ramadan on the compound known to Muslims as Noble Sanctuary and to Jews as Temple Mount in Jerusalem's Old City on June 10, 2016. Photo courtesy of REUTERS/ Ammar Awad *Editors: This photo may only be republished with RNS-RAMADAN-ISRAEL, originally transmitted on June 24, 2016.
July 1, 2019
Jeffrey Salkin

Jeff, are you a masochist?

Why would you choose to spend a precious Sunday afternoon at a program featuring Jewish Voice for Peace, an anti-Israel group, that was sponsored by the public library in Hollywood, Florida?

I could have spent that hour and a half at the swimming pool.

When it was over, I needed more than a pool.

I needed a shower -- to wash the hatred off my skin.

The event was "Islamophobia, Antisemitism and the Movement for Palestinian Rights in Florida."

It was an hour and a half of Israel bashing -- by Palestinians of the Palestinian diaspora, and by Jews who were quick to use the phrase "speaking as a Jew..."

Snark alert: if the only time you use the phrase "speaking as a Jew" is to bash Israel, I have a problem with that.

If the only time that your Jewish identity kicks in is to actively despise the only Jewish state in the world, I have a problem with that.

First: JVP believes that Israel is a metaphor for everything bad that happens in the world, and that has ever happened to the world.

Witness the map that they passed around -- comparing the loss of Palestinian lands, to the loss of Native American lands in North America.

The message: Israel is the Andrew Jackson of nations.

Second: JVP’s idea of Zionism is so one-sided as to be ridiculous.

A representative of JVP said: "The naqba [the Palestinian term for the creation of Israel, and the subsequent displacement of Palestinians] is the most defining aspect of Zionism."

I thought that the most defining aspect of Zionism was the creation of a Jewish sovereign state in the land of Israel, that would inspire Jews to reclaim their past and to build their future.

Third: JVP has a jaundiced view of the current needs of Jewish education.

A Jewish panelist said: "Jews have learned that the only way to be Jewish is to build a wall between yourself and the world."

I have had almost sixty years of Jewish education, in synagogues, summer camps, college, and rabbinical school.

I never heard that explanation of Judaism.

Unless, of course "building a wall between yourself and the world" is just a code word for caring about Israel.

That JVP representative urged that every Jewish religious school in Florida adopt their "naqbas curriculum" and teach it to Jewish young people.

Right after I have figured out how to get kids to read Hebrew, chant prayers, and to love Judaism in the two hours a week that I have them.

Because, as you know, many Jewish parents will insist that their kids forego soccer and lacrosse so that they can learn about the naqba.

Fourth: JVP has a bizarre understanding of the meaning of terrorism in the world.

When an audience member asked about Hamas, a panelist hemmed and hawed, saying that because the Palestinians are an occupied people, we have no right to judge their tactics.

Consider this statement from the Hamas charter:

With their money, they took control of the world media, news agencies, the press, publishing houses, broadcasting stations, and others. With their money they stirred revolutions in various parts of the world with the purpose of achieving their interests and reaping the fruit therein. They were behind the French Revolution, the Communist revolution and most of the revolutions we heard and hear about, here and there. With their money, they formed secret societies, such as Freemason, Rotary Clubs, the Lions and others in different parts of the world for the purpose of sabotaging societies and achieving Zionist interests. With their money they were able to control imperialistic countries and instigate them to colonize many countries in order to enable them to exploit their resources and spread corruption there.

Apparently, we have no right to judge that, either.

The only people who get judged in this conversation are Israelis and Jewish supporters of Israel.

Everyone else gets a free pass.

Fifth: JVP does not understand the lived inner reality of contemporary Jews.

It is not the case that if you care about Palestinian rights, then you must hate Israel.

Neither is it the case that if you care about Israel, then you don't give a plate of hummus about Palestinian rights.

You should meet the people that I hang out with -- both in the United States, and in Israel.

We are Zionists -- and we maintain both commitments -- caring about Palestinians, and wanting a secure, Jewish, democratic state.

But, that compassion for Palestinians who lost their homes in 1948 does not mean that I will erase my identity as a lover of Israel.

My problems with the occupation, and other Israeli policies do not mean that I will erase my identity as a lover of Israel.

Neither does it mean that I believe something that Israel should do something that the world has asked no other country to do -- to rewind history and to go out of business.

JVP does not want a better Israel.

JVP wants no Israel -- because it does not want a Jewish state.

Because, in a sea of Christian states, Arab states, and Muslim states -- a state for the Jewish people is simply a moral bridge too far.

Apparently, Jews and Israelis are incapable of being triggered, or being subject to micro-aggressions.

Imagine yourself a Jew sitting in that library yesterday.

Let's just say that your cousin had died in a terrorist attack -- at the hands of Hamas.

The crowd expected you to just sit back, shut up and take it with a smile.