(RNS) — Yes, a Christian student group can require its leaders to be Christian.

That’s the decision a judge reached last week in InterVarsity Christian Fellowship/USA v. the University of Iowa, a lawsuit the evangelical Christian campus ministry brought against the university and several of its leaders after the school booted InterVarsity and other religiously affiliated student groups for requiring their leaders to share their faiths.

Those groups also included Muslims, Sikhs and Latter-day Saints, according to a statement from InterVarsity.

“We must have leaders who share our faith,” InterVarsity Director of External Relations Greg Jao said in the written statement.

“No group — religious or secular — could survive with leaders who reject its values. We’re grateful the court has stopped the University’s religious discrimination, and we look forward to continuing our ministry on campus for years to come.”

At least three University of Iowa leaders are being held personally accountable to cover the costs of any damages awarded later to InterVarsity, according to U.S. District Judge Stephanie M. Rose’s Friday (Sept. 27) ruling, provided by the Becket Fund for Religious Liberty, which represented InterVarsity.

The ruling left open the possibility that university President Bruce Harreld still could be found liable, too.

Rose’s decision comes on the heels of a ruling she made earlier this year in a similar case involving the university and a student group called Business Leaders in Christ. Because she felt university leaders should have understood after that case how to treat the groups fairly, the judge is holding them personally accountable.

That’s not unusual, according to Daniel Blomberg, senior counsel at Becket.

“When government officials violate the Constitution, break the law and they hurt somebody, then they can be responsible for damages — for damage they have caused,” Blomberg told Religion News Service. 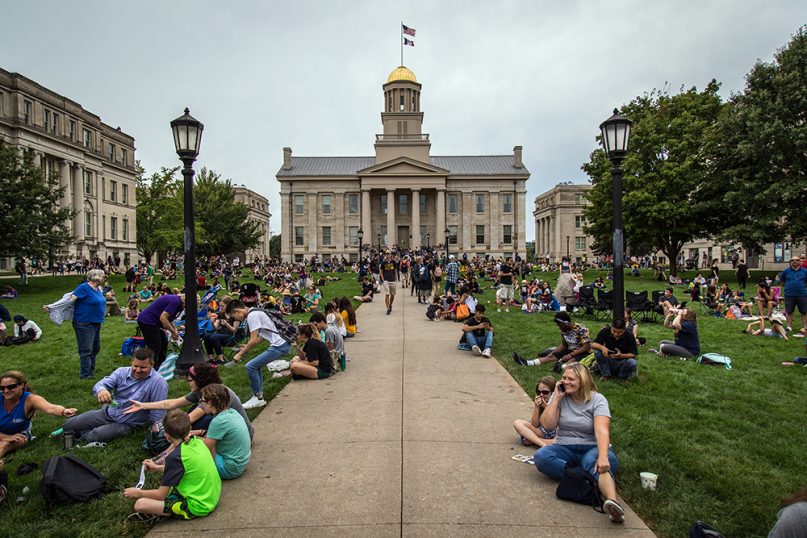 People gather to watch the solar eclipse at the University of Iowa campus on Aug. 21, 2017, in Iowa City, Iowa. Photo by Phil Roeder/Creative Commons

The lawsuit came in August 2018 after the University of Iowa claimed InterVarsity was violating the university’s human rights policy by requiring leaders to affirm the organization’s statement of faith. That policy prohibits discrimination based on race, creed, color, religion, sexual orientation, gender identity or other attributes.

In June 2018, the university deregistered InterVarsity for more than a month — returning it to good standing only after it sued.

During that time, the University of Iowa limited InterVarsity’s access to campus, froze its bank account, shut down its website and labeled it “defunct” for lack of student interest, according to a statement from Becket. Membership in the student group dropped from the nearly 40 students to just over 20 — the “sharpest membership decline in over twenty years,” according to the legal institute.

The student group has been active at the university for 25 years, according to InterVarsity, which has similar groups on campuses across the country.

All students are welcome to join InterVarsity, which hosts weekly Bible studies and monthly meetings for prayer, worship and discussion. However, leaders are required to affirm its statement of faith.

“The University of Iowa has always respected the right of students, faculty, and staff to practice the religion of their choice,” according to a statement posted on the university website.

In a Sept. 25 hearing and in her ruling, Rose pointed to her decision earlier this year in Business Leaders in Christ v. InterVarsity, saying the university violated the group’s rights when it deregistered the group over its religious belief that sex should be reserved for marriage between a husband and wife.

Rose called the university’s decision to then single out religious student groups “incredibly baffling” in the hearing transcript posted online by Becket.

“You not only went after the BLinC-type people, but you went after all religious people, which is worse than what you did in BLinC, in my opinion,” she said.

The judge also pointed out the university’s uneven enforcement of its policies for student groups.

It allows fraternities and sororities to admit only men and women, respectively, and Pi Kappa Phi requires members to be “believers in God” and exhibit the “highest ideals of Christian manhood.” Another group, called Love Works, requires its leaders to affirm the LGBTQ community and acknowledge that “Jesus will be at the center of everything we do.”

The University of Iowa has since revised its student organization policy to allow student groups to require their leaders “agree to and support” that group’s beliefs.