(RNS) — After nearly 40 years, the Star Wars saga is almost complete, and the decades-long journey of the Jedi is ending. But the spiritual legacy of the Jedi is sure to last much longer.

The implicit metaphysics of Star Wars — that there’s a vague energy called The Force that flows through us all, that has both Light and Dark Sides between which we all must choose — has by 2019 become an indelible part of our collective conversation.

In 1980, just three years after the first Star Wars movie came out, “A New Hope,” the American public was still overwhelmingly Christian. Sixty-one percent of Americans described themselves as Protestant, and 28% said they were Catholic.

Today, just 43% of Americans identify as Protestant and 20% as Catholic. More Americans than ever before — about a quarter — identify as “religiously unaffiliated,” while, according to different polling data, about a fifth say they’re “spiritual but not religious.” 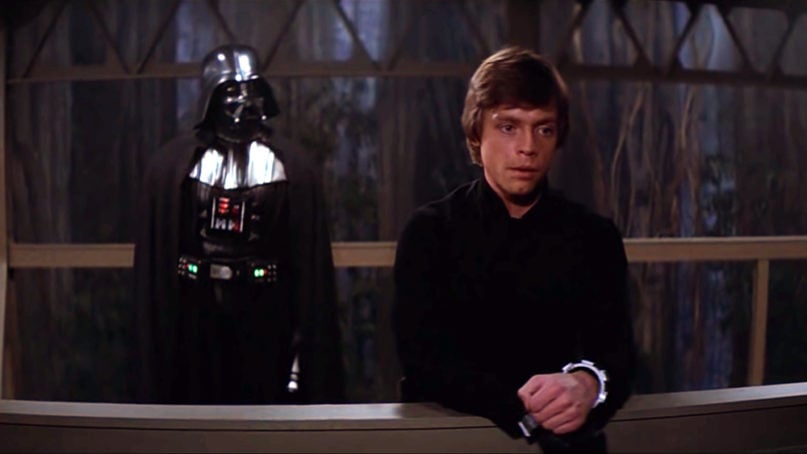 Mark Hamill as Luke Skywalker, right, in a scene with Darth Vader, his father, in “Star Wars: Episode VI – Return of the Jedi.” Photo courtesy of Lucasfilm

These Americans aren’t, of course, becoming literal Jedis. But we hardly need to carry a light saber to find ourselves talking about a powerful energy that binds together the universe. For more and more Americans whose spirituality lies outside traditional faith structures — even those who identify as Christian but whose private beliefs are more syncretic in nature — the theology espoused by Star Wars, of vaguely conceived notions of Light and Dark, has become the new theological normal.

The idea of a cosmic force with good and bad iterations is as old as, well, yoga. But these days it can found in SoulCycle classes, meditation apps and self-help and self-care guides advising us to avoid “toxic” energy in others. A 2018 Pew poll found that a full 42% of Americans said they believed that spiritual energy could be located in physical objects. (That number spiked to 47% among the religiously unaffiliated.)

What the Star Wars approach to cosmology doesn’t have is much of a moral code. Denuded of its particularity on Tatooine or Hoth, it requires little in the way of ethical commitment beyond not actively choosing the Dark Side, the chief downside of which seems to be developing a complexion you need to conceal under a helmet. 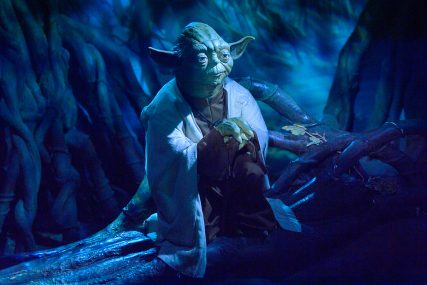 This theology has become a foundational text in the same way Star Trek helped form many people’s ideas about the Cold War or Harry Potter has informed our rejection of racial purity and inclusion. St. Paul may have preached that in Christ there is neither Jew nor Greek, but today more Americans have seen a Harry Potter movie than know the names of the four gospels.

In 2001, a famous campaign was launched by U.K. and Commonwealth atheists to encourage the religiously unaffiliated to describe themselves as “Jedi” on a census — a protest against what they saw as the cultural strength of the Church of England.

The campaign was wildly successful — nearly 400,000 people in England and Wales signed up, while not long afterward the Australian government had to issue a plaintive request for people to stop calling themselves Jedis. (A far smaller number of people actively identify as members of the Jedi Temple, a nontheistic religious group more explicitly inspired by Lucas’ philosophy.)

The Jedi census phenomenon, 20 years later, is no longer only a means of trolling established religion, or even the manifestation of fan culture. “Spiritual but not religious” has intersected with the old divisions of good and evil to form a new metaphysics that rejects doctrines that claim to be true for everyone in favor of unobjectionable, if nonspecific, beliefs in what we all know to be fiction.

It may not feature snow, or Santa, or elves, or creches. But, in many ways, “The Last Skywalker” is the Christmas movie for our time.