Last year, I apparently screwed up something about the veil I wear whenever I go to the temple of the Church of Jesus Christ of Latter-day Saints. I don’t know what I did wrong, but it seems to have been obvious enough to other people that a sister behind me and a temple worker in the hallway both commented on it. The temple worker even fretted aloud that my incorrect veil placement may have actually invalidated the endowment ordinance.

Perhaps my veil troubles will soon be over. On Friday, the First Presidency of the LDS Church announced that changes are coming to the ceremonial clothing that Mormons wear inside the temple, and that the new clothing will be available on March 31. Here is what the clothing looks like currently, in a screen shot taken from a beautiful video the Church created to explain more about temple rites to both believers and outsiders. 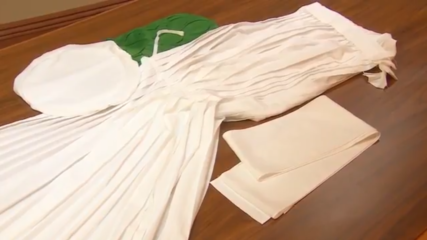 The Church has not released any renderings of what the new temple clothing will look like, but the First Presidency statement and the FAQ noted several projected alterations:

These changes come almost exactly a year after the Church made more far-reaching adjustments to the wording and actions of the temple endowment ceremony, including the removal of a promise that women were to harken to their husbands (now, women, like men, covenant to harken directly to God). At that time, the Church also simplified how the robe and shoes are used during the endowment ceremony.