Another kid offered the following answer: “Because they’re jealous of us.”

“Whatever for?” another kid retorted.

“Because we believe good stuff.”

The question is: What is the “good stuff” that Jews believe?

It is a good question, and it is one that haunted one of the most prolific, and one of the most controversial, thinkers in the contemporary world — a man who died just the other day, at the age of 90.

I am referring to the late George Steiner — a literary critic, a professor of comparative literature at Oxford and Cambridge, and one of the more original intellectuals in the contemporary cultural landscape.

Of all the things Steiner taught in his long and illustrious career, the most tantalizing thing was his answer to that question: “Why do they hate us?”

It all goes back to the question: “Why do there need to be Jews at all?”

According to Steiner, the role of the Jews is to be a royal pain in the you-know-what.

Back in the “good old days,” humanity had many gods. This allowed for a diversity of human belief and ethics — a kind of sacred relativism.

And then, the Jews came and invented monotheism. They taught about the God who was all demanding and judgmental.

That is how the Jews became a “moral irritant and insomniac among men,” a role Steiner calls an “honor beyond honors.” The Jew represents the uncompromising demand for universal morality, the intoxicating idea that human beings can overcome their selfish impulses.

This vision is Judaism’s great contribution to humanity. The establishment of an inescapable divine conscience, of an uncompromising demand for moral elevation, for unconditional love and for total altruism — this is the great legacy of the Jewish people, through which it has irrevocably changed the moral face of mankind. 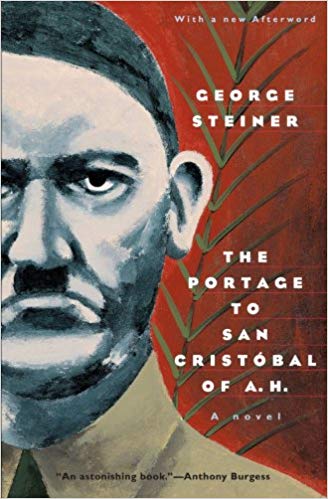 “The Portage To San Cristobal of A.H.” by George Steiner. Courtesy image

But this came with a price — Jew-hatred and Judaism-hatred. Steiner suggests when the Jews invented the ethical idea, that caused people to hate them. There is that wonderful pun the ancient rabbis loved to make: Sinai (the moment of revelation) led to sinah, hatred.

Jew-hatred, therefore, is an exalted version of “kill the umpire!”

The best way to understand this is to read Steiner’s 1981 novel, “The Portage To San Cristobal of A.H.”

Actually, not to speak ill of the dead: Don’t read it. It is awful.

Except for the last two pages.

Steiner imagines Hitler was still alive in the jungles of South America. Israeli agents find him, arrest him and bring him to trial in Israel.

On the last two pages of the novel, the 90-year-old Hitler takes the stand in his own defense. Hitler says he had to do what he did, because the Jews invented not only conscience, but God:

“Was there ever a crueler invention, a contrivance more calculated to harrow human existence, than that of an omnipotent, all-seeing, yet invisible, impalatable, inconceivable God? … The Jew invented conscience and left man a guilty serf.”

Steiner was on to something.

Consider the words of the historian Paul Johnson, in his book “A History of the Jews”:

The Jews believed themselves created and commanded to be a light to the gentiles and they have obeyed to the best of their considerable powers. The results, whether considered in religious or in secular terms, have been remarkable. The Jews gave to the world ethical monotheism, which might be described as the application of reason to divinity. In a more secular age, they applied the principles of rationality to the whole range of human activities, often in advance of the rest of mankind. The light they thus shed disturbed as well as illuminated, for it revealed painful truths about the human spirit as well as the means to uplift it. The Jews have been great truth-tellers, and that is one reason they have been so much hated.

Steiner, alas, was an anti-Zionist — but a rather quirky version of that.

Because, if your role is to be a royal pain in the _____, and to be the conscience of the world, it was simply inefficient for your people to be holed up in one corner of the world. Steiner believed the Jew had to be homeless, in order to more effectively bring that moral message to the world.

Steiner was an ethical purist. For centuries, the Jews were blameless and harmless because they were powerless. For Steiner, it was an honor to belong to a people who had a clean moral report card — and not to have to worry about building a state, and the violence sometimes necessary to maintain and defend it.

Israel must necessarily (I stress this word, and would repeat it 20 times if I could), necessarily, inevitably, inescapably, kill and torture in order to survive … And when I look from the top of a wall at the long line of Palestinian workers trying to get to their daily jobs, standing in blistering heat, I can’t help seeing the humiliation of those human beings in that line, and I say to myself, “It’s too high a price to pay.”

Is it too high a price to pay?

I would rather have an Israel that embodies its name — Yisrael, the one that struggles with God and with the Ideal — than to have no Israel at all.

At the end of the day — toward the end of his mortal day — that is precisely what Steiner said. In an interview:

To say that (Benjamin) Netanyahu is wrong is easy when you’re in a Cambridge drawing room. You should say it when you’re over there. And as long as you’re not there, completely immersed in living there, I think it’s better to hold your tongue.

Right about now, George Steiner is giving it to God but good.

And they are both enjoying the battle.