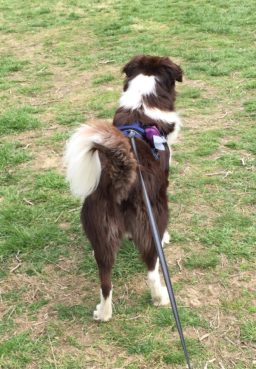 Zeb at the start of his ill-fated walk. Photo by Jana Riess

(RNS) — During the Covid-19 pandemic I’ve been anxious about various matters, from the health of elderly loved ones to the financial meltdown happening in my 401(k).

But those are small in the grand scheme of things, just related to my own little world. In the bigger picture, I’ve also had deep anxiety of how this virus will expose the unstable fault lines of American culture. What kind of people will we be during the pandemic, and afterwards? How much will we put our own needs aside for the common good?

In the afternoon I knocked off work early to take Zeb on a long walk in the woods. We adopted Zeb just six weeks ago, and he was pretty traumatized by the first two years of his life (see here for more). He’s made remarkable progress since then, learning to walk on a leash, live inside a house and snuggle with humans. He loves nothing better than a long walk in the sunshine, and we were both excited to break the monotony of self-isolation to enjoy the lovely spring day.

When we were deep in the woods he scarfed something off a low bush. Before I could yank him away he had already swallowed whatever plant it was. I scolded him while he trotted away, but he seemed perky and fine, so I didn’t worry until about 10 minutes later, when he threw up.

He seemed tired, so I led him toward a tree stump where I thought I could sit down and wait for him to feel better. I figured the spell would pass. Instead, my usually exuberant dog sat down for a moment, and then he collapsed into the mud.

He was alert, but could not move his legs or get up. I started to panic, because we were far from the road and I could not carry him (he is 70+ lbs). Luckily for us, two Summit high school students, Brady and Ellie, found us and stopped their walk to see if we needed help.

They waited with me while I called the vet, then they did the bulk of the carrying while we trudged out of the park. My husband met us partway with the car and we thanked the two young people before zooming off to the vet.

I think their fast action probably saved Zeb’s life. He had gone into anaphylactic shock, basically a life-threatening allergic reaction to whatever it was that he ate. His gums and tongue went a pale gray, his back legs stopped working, his gallbladder developed a “halo sign” and his blood pressure plummeted. Without immediate medical intervention, the next stages could have been cardiac arrest and death. 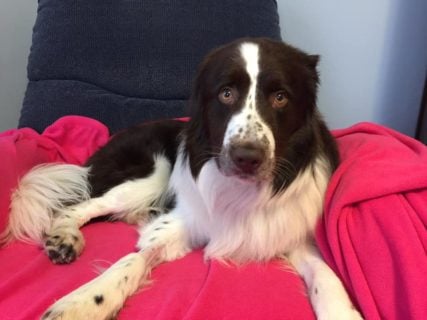 Zeb this morning, home from the hospital. Photo by Jana Riess

The good news is that after a night in the doggy ICU being pumped with steroids and epinephrine and the like, Zeb is home today and out of the woods. (I mean that both metaphorically and literally: he will never, ever be taken on an unmuzzled walk in the woods again!)

I’m immensely grateful for his good physical health, as his faithful companionship has become a linchpin of his humans’ mental health in these strange homebound weeks. But the incident has brought two key ideas home to me.

The first is that every day during this pandemic, the news has reminded me of how fragile life is, and how it can all change in an instant. We never know what is coming. Over the past few days I’ve learned that three people I know who are around my age or younger are sick with the coronavirus. One of them has been in the hospital. In a small way, seeing my dog go from perfectly healthy to dangerously ill within the span of a few minutes made it all seem real. Life is so, so precious.

The second thing is that we can still rely on the kindness of strangers. And thank God. While social distancing is vital and I strongly support it, I’m grateful that two teens dropped everything in order to help save my dog. They didn’t hesitate. They just pitched in.

Looking back on the last 24 hours, I’m poorer in the sense that a single night’s stay in the doggy ICU has put an unexpected drain on our family’s wallet, but immensely richer to know that there are caring young strangers whose humanity is undimmed by this pandemic.

To them, as to me, saving Zeb seemed the most important thing in that moment. People still make decisions to care for others, even if it means getting into close proximity to strangers so you can jointly haul a furry friend to safety.

It would be terrible if we all came out of this pandemic as something less than human. But after yesterday, I have a lot more hope. The kids are all right.

What kind of people will Mormons be in a global apocalypse?