(RNS) — This weekend I saw a bumper sticker with the slogan “Who rescued who?” shoehorned inside an adorable paw print. It’s a fair question, I think, for anyone who has ever adopted a shelter dog.

My husband and I have adopted a number of dogs over our 28 years of marriage, and all of them were refugees from one situation or another.

One, a chihuahua-Basenji mix, had lived with a homeless woman outdoors for at least a year before coming to us. That dog never did potty train completely, had a serious heart defect and could be downright vicious about protecting her food, but was otherwise a loving pet. Well, except for that time she bit my husband and put him in the ER. There’s that. It’s a good thing she only weighed about 12 pounds soaking wet, or she might have taken his fingers clean off.

Our other dogs had stories that were not nearly as dramatic but equally heartbreaking. It’s a rotten thing, not to be wanted. 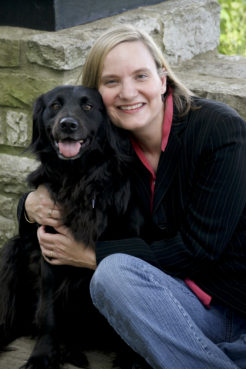 Onyx and Jana in 2010. Photo courtesy of Jana Riess

Our most recent pet, Onyx, was about a year old when he came to us. All the foster family knew was that he had been brought to the shelter “by a mean man in a truck.”

From this sliver of information we spun many a narrative about his possible provenance: Perhaps Mr. Mean Man had wanted a hunting dog, or a guard dog for his farm, and found Onyx’s Zen-like demeanor too passive for his needs. But that was exactly what made him the perfect dog for us, with a family member on the autism spectrum and an ongoing need to make our home a sanctuary.

Onyx passed away in May of last year, after a terribly quick decline from cancer. On the night of his death, I posted a brief announcement on Facebook and said I would write more later when I felt more in control of my emotions.

I never did post a follow-up; it was just too hard to talk about. I felt acutely conscious that people who hadn’t loved a dog in that way wouldn’t understand that we’d lost a family member, and that people who did understand would be so full of sympathy that I couldn’t quite bear their kindness. It’s difficult to explain.

The months that followed were fine, for the most part. We enjoyed our work and stayed busy with projects and church and friends. My husband and I, now empty nesters, enjoyed traveling together and took several trips without having to worry about who would take care of the dog. But always, for me, was this emptiness below the surface, the knowledge that a part of me was missing.

Last week, we took the plunge again. After nine months without a dog, we adopted a beautiful furry fellow from a community rescue in Indiana. He had been one of about four dozen dogs saved from a hoarding situation down south, where they were all kept isolated in little pens outdoors and had very little human interaction.

Apparently the woman who hoarded these dozens of dogs felt she had a mandate from God to do so. They were not starved or mistreated, it seemed, but many were filthy and in poor health. They never got a chance to be part of a family. It’s hard to see much of God in that situation. 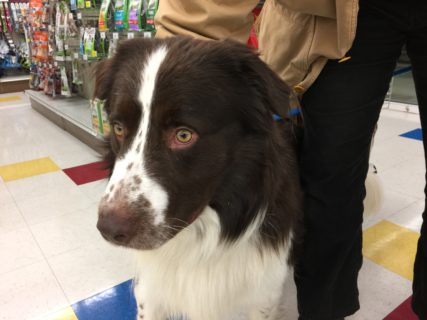 Zeb the night of his adoption. Photo courtesy of Jana Riess

Where I do see God at work is in the redeemers — the volunteers who spend untold hours and their own money, often, to save these vulnerable creatures. These are the folks you might see at PetSmart on a Saturday, giving their whole hearts to find homes for all God’s critters. We met one of them the night we drove over to Indiana to meet our new dog, whom we named Zeb. She had fostered him for a couple of weeks. Zeb seemed reluctant to part with her, and little wonder: I think she was the first human being who had ever shown him love.

The last week has been marvelous and devastating, all in one. We didn’t get home from Indiana until nearly 11 p.m. on Tuesday night and Zeb broke his leash and when we took him for a walk shortly after 5 the next morning, he ran away. He had only been in our home for a little over six hours, and we hadn’t even had time to make him a name tag for his collar. We were terrified that he’d be lost forever or get hit by a car. We felt terribly irresponsible that we had let this happen to this boy who had been through so much trauma already.

We found Zeb three nail-biting hours later, thank God, after I had sent up anxious prayers not only to God but also to the spirit of every deceased dog lover I’ve ever known in my family and circle of friends. My people on the other side apparently understood the crisis and were pulling for Zeb. He seemed relieved to be found and led back home. He actually had almost made it all the way back there by himself, which shows a bit of how smart he is, since he’d only been there once.

He is starting to flourish. Every day, there is some small change, some unfolding, some letting down of his guard. For days he ate almost nothing, but he has since started eating — primarily when we are not in the room. He still watches us carefully, but has stopped skittering away every time we come near him in the house. He is doing much better on the leash and hasn’t had an accident since the first few days. He is learning how to go up and down stairs. 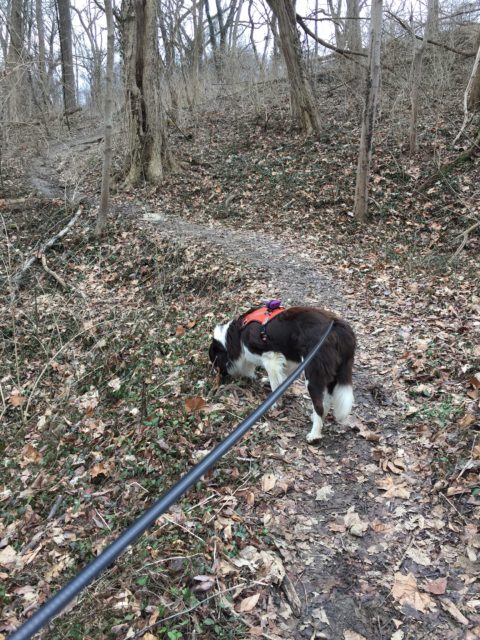 A walk in the woods with Leash #2–which is much stronger than the first! Photo courtesy of Jana Riess

He’s also getting more affectionate. Over the weekend, he surprised me by letting me cuddle him close. When I stopped the petting he inched forward a bit, moving himself closer to indicate he did not actually mind the cuddling so much, after all. I could carry on. Then yesterday he put his whole head in my lap and practically begged for more. He wags his tail now when he sees us approach. He is coming alive.

I am coming alive, myself.