(RNS) — On Palm Sunday (April 5), the Rev. Ted Gabrielli, a bespectacled Jesuit with a bushy beard, stood in the bed of a roving pickup truck that traveled through Boyle Heights, a mostly Latino neighborhood on Los Angeles’ east side.

Gabrielli, a pastor at Dolores Mission Church, greeted neighbors from the truck and blessed the homes, alleys and streets he passed. He greeted many by name. One neighbor, caught on a Facebook livestream of the procession, stood from her home waving palms, the symbol of Jesus’ triumphant entry into Jerusalem in the week before he was crucified.

“We’re at your orders,” he told passersby in Spanish. “May God bless you all this Palm Sunday.”

Gabrielli, one Facebook commenter wrote, was “bringing Jesus to our streets.”

The church called it the Blessing of the Barrio. 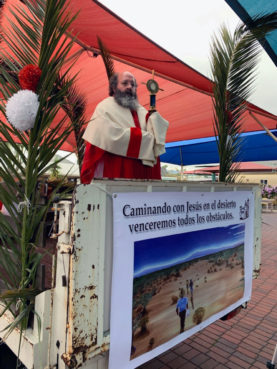 Gabrielli’s colleague at the mission, the Rev. Brendan Busse, offered the blessing as an example of how Dolores Mission is improvising this Holy Week during a pandemic that has prevented Jews from gathering for Passover and Christians from attending the solemn liturgies that lead up to Easter, the holiest day of the church’s calendar.

“Everything is kind of on the fly right now,” said Busse, who took part in the procession.

On Maundy Thursday, a service that includes a ritual foot washing in imitation of Christ’s gesture of servanthood toward his apostles, the church will ask families to wash each other’s hands at home and to  take and send photos to the church so they can be featured at an evening virtual service.

A Via Crucis, or Way of the Cross, procession on Good Friday will no longer take place as county officials urged residents to limit the time they spend outside. Busse said there’s a feeling of absence not being able to carry out these traditions. But, he said, that’s at the heart of Good Friday.

“To think about Jesus dying and his death on the cross, for us to not be able to do that the way we want to, is actually theologically and spiritually at the heart of what Good Friday is about,” Busse said.

The impact of the pandemic on Christian churches may be felt most deeply on Sunday, however, when converts are typically baptized into the faith, often after weeks or months of education and counseling about their decision.

At All Saints Episcopal Church in Pasadena, California, the 3,000-member congregation traditionally gathers Holy Saturday on the lawn to light the Paschal candle, which will burn during services for the remainder of the Easter season’s 50 days. Congregants then move into the church building for a service of storytelling, baptisms and the first celebration of Easter.

This year, the Rev. Mike Kinman, rector of All Saints, said the lighting of the fire, storytelling and celebration will happen online, and the baptisms will be postponed until public health officials say it’s safe. 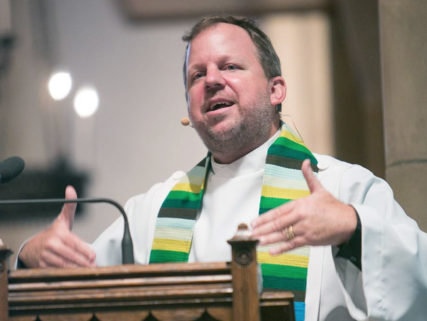 The pandemic, he said, is actually an opportunity to find new and more intimate ways to do ministry.

For all the focus on virtual Easter, many Christians are pushing into the real world, whether through charitable acts or home versions of Holy Week liturgies. The Rev. Elizabeth Eaton, presiding bishop of the Evangelical Lutheran Church in America, published a video recently calling on her fellow Lutherans to join with other denominations in small acts of Christian witness in the upcoming days.

“Let us remind each other that while the body of Christ may be dispersed, we remain united in our common witness as the ELCA and with our ecumenical partners,” she said.

In a letter signed by leaders of the National Council of Churches, Christian Churches Together and Churches Uniting in Christ, members of congregations ranging from Orthodox to evangelical were urged to perform home foot washings on Maundy Thursday or blow out a candle on Good Friday to symbolize Jesus’ crucifixion.

They even suggested borrowing from other holidays, offering that the Resurrection can be celebrated by hanging white Christmas lights and illuminating them on Easter morning.

Such lighthearted innovations belie the more radical dislocations the pandemic has caused, especially for liturgical denominations, leading up to a holiday that is at once one of the most mystical and most sensual in world religion. Foot washing, bearing and kissing crosses, and kneeling for long periods give over on Easter morning to bell ringing, baptisms and shouts of “He is Risen!” in celebration of the resurrection of Jesus.

Pastors and their staff have been scrambling to reconceive those rituals in light of the pandemic and social distancing restrictions. 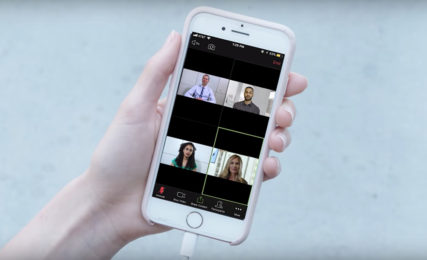 The Zoom app has recently been adopted by many houses of worship for videoconferencing and streaming worship services. Video screengrab

As with businesses beset by the pandemic, churches have turned en masse to Zoom and other remote meeting apps not only for services but to keep their congregations — digital natives, boomers and the elderly alike — intact and engaged.

Kast has long had an active pastoral presence online, often posting brief meditations online, as well as clips of her morning workouts, with encouragement to care for body and spirit.

In past weeks she’s made phone calls to help walk members through how to use the videoconferencing tool, particularly since it added new security measures and passwords to prevent “Zoombombing.” She checks in with the church’s caring team, which has been reaching out to members throughout the week to make sure they feel supported.

“I’ve been really impressed with the adaptability of my congregation,” she said.

On Palm Sunday, she encouraged members to wave whatever branches they had — maybe cedar or forsythia cut from their yards or palms cut from paper. For Maundy Thursday, she will invite members to join her in communion over Zoom, using whatever elements they have at home: toast and coffee, crackers and juice. “Just bring it with you and I will bless it through the screen,” she said.

As ad hoc as some online rites are, the anecdotal evidence suggests the livestreamed and streamlined services have been drawing well. On Palm Sunday, the website of Washington National Cathedral showed more than 15,000 people watching, approximately six times its usual audience. Messages that popped up on screen came from viewers around the world. 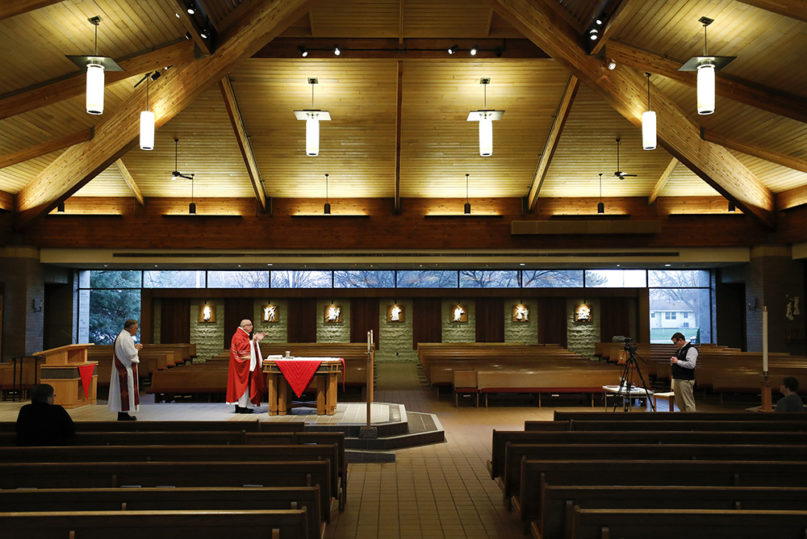 The Rev. Michael Amadeo celebrates Mass during the broadcast and recording of the Palm Sunday Mass at Our Lady’s Immaculate Heart Catholic Church for parishioners to watch online on April 4, 2020, in Ankeny, Iowa. Sunday Masses are available online in response to the new coronavirus outbreak. (AP Photo/Charlie Neibergall)

The Rt. Rev. Michael Curry, presiding bishop of the Episcopal Church, whose prerecorded sermon will be included in the cathedral’s Easter service, ventured that “more people are actually going to church” in the current virtual climate than attend on a normal Sunday.

Larger churches with the technical know-how, dedicated YouTube channels and a brand name clearly have an advantage. “The first Sunday we had 6,000, the second Sunday we had 8,000, the third Sunday we had 25,000 people,” said the Rev. James Howell, pastor of Myers Park United Methodist Church in Charlotte, North Carolina. The church typically draws 5,000 people on Easter.

Howell acknowledged: “We have the staff, capacity and money to do a better production.” He also suggested some people may be “double dipping” — tuning in to their own church services and then visiting more prominent names.

Some churches are so successful in bringing in participants, they have broken them into groups to promote interaction. At C3, a Southern Baptist church about 18 miles east of Raleigh, North Carolina, Pastor Matt Fry split up church members into 20-30 member “watch parties” that gather on Zoom for 15 minutes before the sermon and 15 minutes after as a way to cultivate community and encourage prayer.

“They get to interact and have a sense of community in a virtual format,” Fry said. “It’s been huge. Each week we get more and more people joining the watch parties. We call it a kind of ‘lobby time.’”

At Urban Village Church, a UMC church in Chicago’s trendy Wicker Park neighborhood, the Rev. Hannah Kardon said that online services have even drawn a number of former congregants who have moved away from the church.

In the isolation of the pandemic, people are grateful for the contact that online services provide. “They want to see other humans. They want to bond with them,” said Kardon.

Knowing people are looking for those kind of spiritual resources makes figuring out how to connect with people that much more urgent, Kardon said: “Our real task ahead of us is how do we let these people who are desperately looking for a new way to think about God know where we are as an option. How do you do that now, only online?” 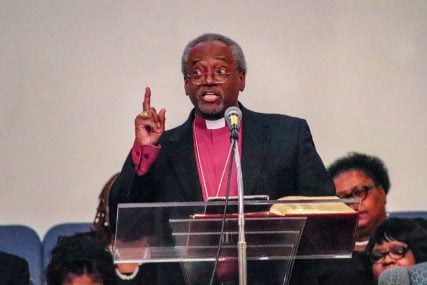 Curry said that priests he’s heard from have the same questions about ministering to their congregations without seeing them face-to-face.

“You can’t go visit the sick. You can’t say prayers with the dying,” he said. “I hear anxiety about a lot of ministries: all the food banks and the pantries and soup kitchens and the various emergency relief ministries — those are people-driven, people touching people.”

Curry said there is also concern that empty churches will lead to a lack of giving on Easter, usually one of the biggest days of the year for donations. While larger churches are typically better equipped for online giving, smaller ones may find themselves struggling to quickly or comprehensively adopt the technology.

At The Summit, a North Carolina megachurch, “90% of our giving is online,” said Todd Unzicker, an associate pastor. The Summit’s pastor, J.D. Greear, is also president of the Southern Baptist Convention.

“The strong majority of Summit members are set up for automated (monthly) giving,” Unzicker said.

He said he has heard from churches that still rely on plate offerings, as well as those whose members have lost their jobs as a result of the coronavirus, saying they’ve seen a dip in revenue.

But Kardon said she is optimistic even for those non-digital or low-tech churches — that the personal networks they have built will prove to be their salvation.

Jack Jenkins and Yonat Shimron contributed to this report.