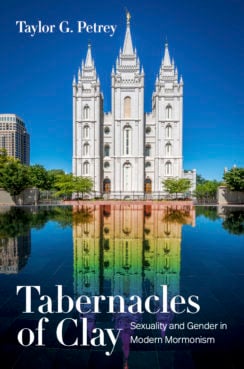 (RNS) – Here’s a conundrum: Leaders of the Church of Jesus Christ of Latter-day Saints consistently preach that women are naturally spiritual, gentle, and nurturing . . . but if those qualities were truly inherent in all women, women would not need to be reminded again and again how to behave in the ways they are supposed to have been designed to automatically behave.

Taylor Petrey’s new book Tabernacles of Clay: Sexuality and Gender in Modern Mormonism says this kind of paradox is not a bug so much as a feature. And the idea that gender identity is not fixed but fluid and changeable also plays out consistently in other areas as well.

Petrey has a doctorate in New Testament and early Christianity from Harvard Divinity School and is an associate professor at Kalamazoo College in Michigan. Our interview has been edited for length and clarity.

RNS: You argue that LDS leaders look like they’re teaching a doctrine of gender essentialism – that there are fixed, “natural” categories of male and female – but that what they’re really modeling is gender fluidity. What does this mean?

Petrey:  Gender fluidity suggests that these categories are not fixed or natural, but that they’re socially constructed in some way. And they’re fragile—they need social support and protection. In so doing, church leaders are conceding that if there is such a thing as nature, it’s incredibly weak, and needs to be propped up.

So rather than rejecting the idea of gender fluidity as incorrect, church leaders have actually used this as an explanation for why there need to be strong social, legal and ecclesiastical constraints on gender in order to produce the “proper” outcomes. Gender needs to be produced and managed so that it turns out in the right way and people behave according to gender norms.

RNS: What are those gender norms in Mormonism?

Petrey: That’s complicated, in part, because the church has changed its teachings. The church since WWII has evolved. They emphasized the rule of the father in leading the home, and the primary responsibilities of women to be mothers and provide unpaid labor in the home, and reproductive sex as the primary and exclusive model of sex. Over the course of the last several decades the church has softened or in some cases even rejected these teachings, and now more and more embraces equality between spouses, not just a hierarchy. They are much less concerned about women working outside the home, and they’re less interested in creating large families.

I argue that these more open, encompassing relationships that can exist now between men and women in the church have been enabled by transferring the concerns about women and their roles onto homosexuality and same-sex marriage. Where they were once concerned that working women would destroy the family, now they’re concerned that gay couples are going to destroy the family. 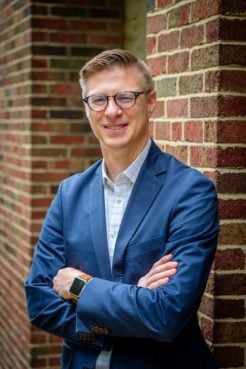 RNS: hadn’t realized that some church leaders taught in this mid-century period that the original human beings had no gender—that people were just an unformed “intelligence” before God made them male and female.

Petrey: The church’s teachings on premortal gender are really in flux in this time period. The transition from a premortal “intelligence” to a premortal “spirit” is potentially one site of instability: When is sex assigned?

And then a second issue is that there’s real anxiety about the idea that there wasn’t any choice involved—that maybe a person’s gender was not in alignment with the person’s will. God would be unjust to have a hierarchy between men and women but then not give them a choice beforehand about what side of the hierarchy they wanted to be on. Some leaders taught that one of the choices that people must have made in the premortal existence was whether they wanted to be male or female—to exercise the priesthood or to be mothers. It’s a kind of theodicy that gets God off the hook for assigning these social conditions, because you chose them for yourself.

RNS: So gender is fluid in the premortal life, in that view. You also note that it’s fluid again after death for the people who don’t make it to the Celestial Kingdom, which is the vast majority of humankind.

Petrey: There’s a good story here! Apostle Joseph Fielding Smith had a popular column where people would write in with doctrinal problems or questions. He gets a letter asking, “What’s going to keep all these non-celestial, unmarried people from just having sex all the time? We already know they’re not righteous, so why wouldn’t they be engaging in postmortal fornication?” And Joseph Fielding Smith says they’re not going to have genitals or be able to reproduce. He explicitly says they’re not going to be male or female. He is solving the potential problem of illicit sexuality in the next life by just getting rid of gender, specifically.

So gender, again, becomes an incredibly contingent thing based on the choices one makes in this life.

RNS: Interesting. OK, so what does this do to the 1995 Proclamation on the Family, which teaches that gender is an eternal characteristic?

Petrey: The Proclamation represents an evolution of the church’s teachings on this point, one that embodies both perspectives. It’s a rejection of those earlier doctrines about a premortal and postmortal gender contingency, but at the same time reveals that if gender isn’t protected by society, it will cause all of these problems. So the Proclamation is an affirmation of what gender should be and an implicit acknowledgement that gender depends on society to support it, or it’s at risk of dissolution.

RNS: Let’s also talk about how the church addresses homosexuality in this period, where it goes from being a non-issue before WWII to something that’s presented as a major threat by the 1960s and 1970s. And that’s not just in the church: you note that the first year that homosexuality appears as a disorder in the American Psychiatric Association’s diagnostic manual (1952) is the same year it’s mentioned for the first time by an LDS apostle.

Petrey: There are a number of different popular psychological theories influencing the church in the 1960s and 1070s. One is a kind of positive thinking, pop psychology/self-help movement that has roots in earlier 20th-century thought as well. Church leaders are latching on to this very American self-help ideology, teaching that you can control your thoughts.

At the same time, you’ve got behavioralism as another psychological theory that’s taking hold. Many church leaders latch on to the idea that we can train ourselves through a set of rigid practices to think and act in certain ways. This was based in a kind of idea of human potential. And some of the early treatments for homosexuality were based in this theory, where you shock the person when they have a homosexual thought.

And the third theory in the background that takes a greater influence is Freudian ideas about the nature of homosexuality being a misplaced attachment between child and parent. That doesn’t take root in the church until the 1970s, when Spencer W. Kimball becomes more open to this idea. The church starts to hire a bunch of Freudian psychologists. They’re less interested in things like shock therapy and more interested in thinking about sexual orientation as a failure of gender: you didn’t identify with your father strongly enough in your younger years, so you need to repair that relationship with the masculine figure.

So you actually have a combination of various psychological theories that come to crystallize in the church around a certain treatment of homosexuality. And it especially arises as soon as the mainstream psychological authorities abandon these ideas. Even though they’ve been discredited by the APA in 1973, the church embraces them because leaders are teaching that sexuality can be changed and people can become heterosexual.

Flunking Sainthood
10 years after Elder Packer’s anti-LGBTQ talk, have Mormons turned the corner on gay rights?
Faith
Mormon girls now acknowledge Heavenly Mother, but boys do not
Flunking Sainthood
Mormon men are groomed not to listen to women
Flunking Sainthood
20 changes the new Mormon president has made to appeal to Millennials and Generation Z
Flunking Sainthood
Did the 2015 Mormon LGBT exclusion policy drive a mass exodus out of the Church?