(RNS) — Accepting the Republican nomination for a second term, President Donald Trump framed his remarks with what he called “the great American story.”

Trump delivered the speech Thursday (Aug. 27) before a crowd of about 1,500 people seated outside the White House, with few wearing masks amid the novel coronavirus pandemic, as masks were only “suggested” for attendees.

Among them were about 150 of the evangelical Christians who informally have advised the president, most sitting together, according to one pastor in attendance.

“Gathered here at our beautiful and majestic White House — known all over the world as the ‘People’s House’ — we cannot help but marvel at the miracle that is our great American story,” Trump said after accepting his party’s nomination.

That story includes figures like explorers Lewis and Clark and former President Abraham Lincoln, he said.

It also, in Trump’s telling, is a story rich in religious faith.

“What united generations past was an unshakable confidence in America’s destiny, and an unbreakable faith in the American people,” he said. “They knew that our country is blessed by God and has a special purpose in this world.”

Here’s how the president wove faith throughout that story on the last night of the Republican National Convention.

During his speech, Trump claimed Democrats see America as “a wicked nation that must be punished for its sins.”

He later added, “Our opponents believe that America is a depraved nation. We want our sons and daughters to know the truth: America is the greatest and most exceptional nation in the history of the world!”

The line is in keeping with Trump’s longstanding political refrain: that the United States was once “great,” that his administration made it “great again” and that re-electing him would keep the country “great.”

However, some may have considered it an unusual line to come from a Presbyterian, a branch of Christianity that Trump often claims as his own.

Presbyterians are rooted in the teachings of John Calvin, a 16th-century theologian who emerged as a leading voice in Europe during the Protestant Reformation. One of Calvin’s core teachings is that while humanity retains a concept of right and wrong, it remains “totally depraved” — and sinful — as a consequence of Adam and Eve’s “original sin” in the Garden of Eden.

In fact, this belief puts the “T” in TULIP — an acronym many Presbyterians and other Reformed Christians use to remember the five points of Calvinism: Total Depravity, Unconditional Election, Limited Atonement, Irresistible Grace, Preservation of the Saints.

Battle for the soul of America

“In this country, we don’t look to career politicians for salvation. In America, we don’t turn to government to restore our souls. We put our faith in almighty God,” Trump said.

The lines were a direct rebuke of Biden’s campaign slogan — “a battle for the soul of America” — as well as a twist on a line that Trump has used for years during rallies and when speaking to religious audiences: “In America we don’t worship government, we worship God.”

RELATED: Joe Biden on restoring the soul of our nation (COMMENTARY)

The remarks were well received by some of the evangelical leaders in the audience at the White House.

“It felt like a revival service on the south lawn of the White House” when Trump uttered those words, tweeted Tony Suarez, chief operating officer of the National Hispanic Christian Leadership Conference.

In a separate correspondence with Religion News Service, Suarez said he heard several “amens” in the audience during Trump’s address, which stretched for more than an hour. 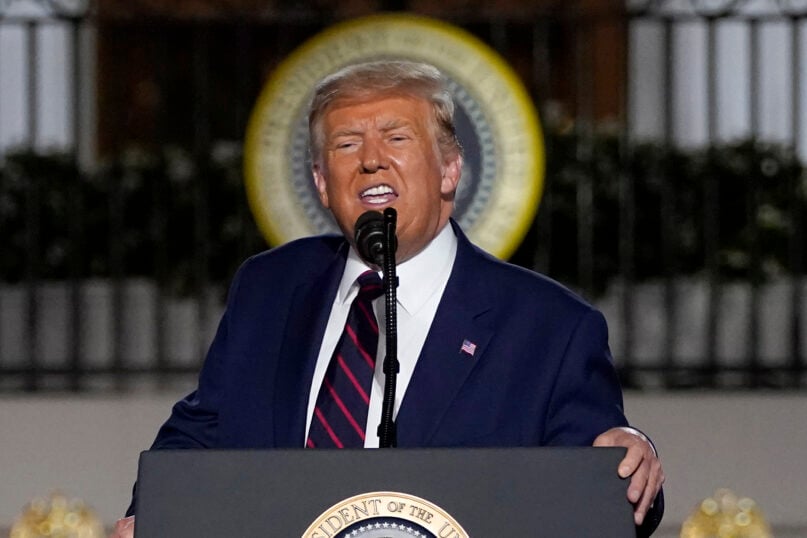 ‘Sanctuary cities,’ and a ‘jihadist’ ban

Although rarely acknowledged by critics, the concept of “sanctuary cities” emerged out of a 1980s religious phenomenon known as the Sanctuary Movement, which encouraged religious communities to house migrants fleeing violence in Central America in their sanctuaries in direct defiance of federal law.

The movement reemerged in a new form — aptly called the “New Sanctuary Movement” — under the Obama administration. It exploded in popularity during the onset of the Trump administration, with houses of worship taking in undocumented immigrants at risk of deportation and essentially daring immigration officials to raid their churches (officials do not do so as a matter of internal policy).

Last year, the Trump administration began issuing massive fines on immigrants taking sanctuary in houses of worship, presumably as a deterrent against the practice.

Meanwhile, religious groups have increased their efforts: Last year, the Evangelical Lutheran Church in America even declared itself a “sanctuary church body.”

As for Trump’s reference to travel bans barring entry to people “from jihadist nations,” there are questions about what he is referring to — and his language.

His administration has long claimed the travel ban that Trump initiated within a week of assuming office was not a “Muslim ban,” despite the countries on the ban list being primarily majority Muslim. Trump himself called for a ban on Muslims entering the United States during his campaign. Jihad, however, is a term used within Islam that is often interpreted to mean “to strive” or “struggle.” While it has been used to denote a call for war or violent action, as Trump implied, it can also be used to describe striving to make the world a better place in other ways.

Trump’s ban was widely opposed by religious groups. Lutherans again were among a number of faith-based agencies who sued the Trump administration over the president’s executive orders banning travel from several Muslim-majority countries, calling it, in effect, a Muslim ban.

One nation under God

“During the Democrat Convention, the words ‘under God’ were removed from the pledge of allegiance — not once, but twice,” Trump said.

Trump and other Republicans have repeated this claim multiple times since last week’s Democratic National Convention.

The accusation is partly true: two different caucuses that met outside of mainstage events — a Muslim delegates meeting and the LGBTQ caucus — did, in fact, omit “under God” while reciting the Pledge of Allegiance during their meetings. But “under God” was said repeatedly by speakers during the pledge and in every instance of the pledge’s recitation during the convention’s mainstage events, including by Biden himself during his closing address.

The omission of God also did not necessarily appear to represent a hostility to faith in general: the Muslim delegates meeting was filled with prayer, and an LGBTQ caucus meeting featured an appearance by former South Bend, Indiana, Mayor Pete Buttigieg, an openly gay Episcopalian who often references his faith.

Moreover, this week’s Republican convention also played fast and loose with the pledge at times. During his address, North Carolina congressional candidate Madison Cawthorn omitted “indivisible” while quoting the pledge in the closing line of his speech, declaring in his prepared remarks and onstage: “One nation. Under God. With liberty and justice for all.”

Nearing the end of his speech, Trump returned to the theme of the “great American story.”

That story began with “our American ancestors” sailing across the ocean to “build a new life on a new continent,” the president said.

What Trump’s version leaves out is the Native American ancestors already living on the continent when European explorers and settlers arrived. It was the Doctrine of Discovery, a series of papal edicts, that gave Christian explorers the right to claim lands they “discovered.”

It also leaves out slavery, pointed out John Fea, a professor of American history at evangelical Messiah College.

The story of American progress is more complicated than Trump made it out to be, Fea told RNS.

“Manifest Destiny was deeply informed by the long-standing evangelical idea that white Protestant ‘civilization’ must advance Westward. God gave the continent to Christians and it was their ‘destiny’ to conquer and tame it,” he said.

“This entire project was drenched in the unholy mix of evangelical Protestantism and white supremacy.”

But the emphasis on the role of Christian faith specifically in America’s founding was well-received by some Christians.

“I believe for those Americans who want a country that’s founded on faith and freedom and on law and order, they were excited by what they heard the president say tonight,” Pastor Robert Jeffress, one of Trump’s most vocal evangelical supporters, told Fox News afterward.