The preliminary injunction is part of HIAS v. Trump, a lawsuit by three faith-based organizations against the U.S. government over the order.

“Today the sun is shining on refugee families and the communities who for decades have devoted their time and resources to welcome them,” The Rev. John L. McCullough, president and CEO of Church World Service, said in a written statement.

“This ruling means that newly arriving refugees won’t have to choose between being together and accessing critical services as they rebuild their lives. It means that people of faith can continue to live out their calling to welcome the stranger. It means we can continue to ensure that all refugees get a bright start in the United States, regardless of who is in office in the states and cities where they live.”

It also likely violates federal law, according to the ruling by Judge Peter J. Messitte, who wrote that giving states and localities veto power “flies in the face of clear Congressional intent, as expressed in the legislative history of the statute.” 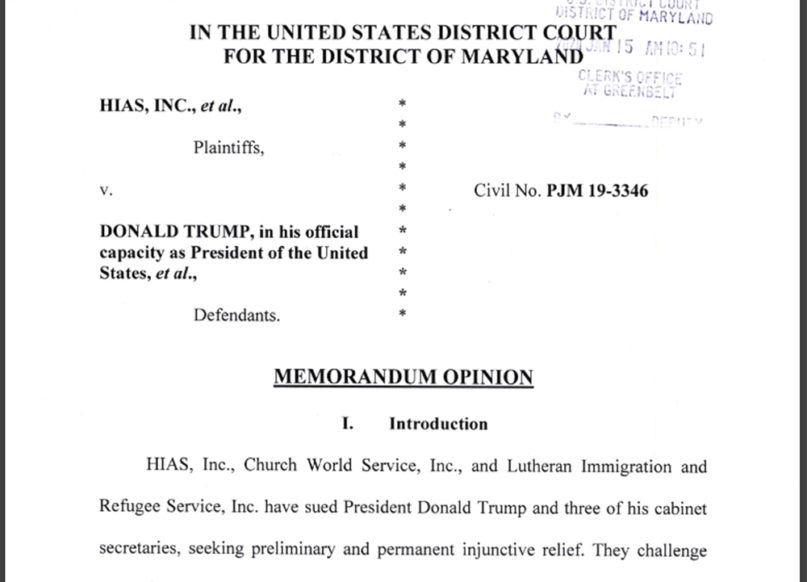 The opinion from the HIAS v. Trump lawsuit. Public record

The executive order required state and local officials to give written consent in advance for refugees to be resettled in their jurisdictions, even as most states — 42, by LIRS’ count — already have agreed to admit refugees.

“To those few who have not, we say not only is it unkind and un-American to ban refugees from your states and towns, but it is unlawful,” said Mark J. Hetfield, president and CEO of HIAS.

Hetfield said in a written statement that the judge’s ruling “shows the country how this administration was wrong to attempt a state-by-state refugee ban.”

Last week, Texas Gov. Greg Abbott became the first to deny resettlement in his state, a move that prompted criticism from every one of Texas’ 16 Catholic bishops. Along with HIAS, CWS and LIRS, the U.S. Conference of Catholic Bishops is one of several faith-based agencies authorized by the government to resettle refugees.

And LIRS President Krish O’Mara Vignarajah said in a written statement that the “fight is far from over.”

“We do not expect the Administration to back down from using these vulnerable people as political pawns. But we will continue to stand for welcome and trust and pray that the law will still protect the most vulnerable who are fleeing war, violence, and persecution,” she said.

Faith-based organizations have characterized Trump’s executive order as “yet another refugee ban” and an attempt to dismantle the country’s decades-old refugee resettlement infrastructure.

That infrastructure relies heavily on religious groups: Six of the nine organizations that partner with the federal government to help resettle refugees are faith-based.

Those groups have been forced to lay off staff and close offices as the Trump administration has drastically cut the number of refugees allowed in the country each year. This year, the president set that limit at just 18,000 refugees — a historic low — compared with 110,000 during Barack Obama’s last year in office.