HIAS (founded as the Hebrew Immigrant Aid Society), Church World Service, and Lutheran Immigration and Refugee Service filed the suit on Thursday (Nov. 21) challenging an executive order signed by Donald Trump in September stating that the federal government should resettle refugees “only in those jurisdictions in which both the State and local governments” have consented to accept them in writing.

The complaint filed by the faith groups alleges the order violates existing law that leaves decision-making power about where to place refugees with the federal government and does not allow state and local governments veto power. The complaint also points to problematic ambiguities in the order, saying it doesn’t clarify which local authorities would need to sign off to allow refugees in their area and that it could inhibit the reunification of refugee families.

Speaking to reporters on a conference call this week, HIAS President and CEO Mark Hetfield called the order — which is entitled “Enhancing State and Local Involvement in Refugee Resettlement — “a lie.”

Hetfield, whose group is Jewish, added that the order has “chilling historic parallels” because it allows states and localities to “have a policy of blanket discrimination against people based on their legal immigration status as refugees.”

He said the order reminded him of the ethnic cleansing of Jews in Europe. 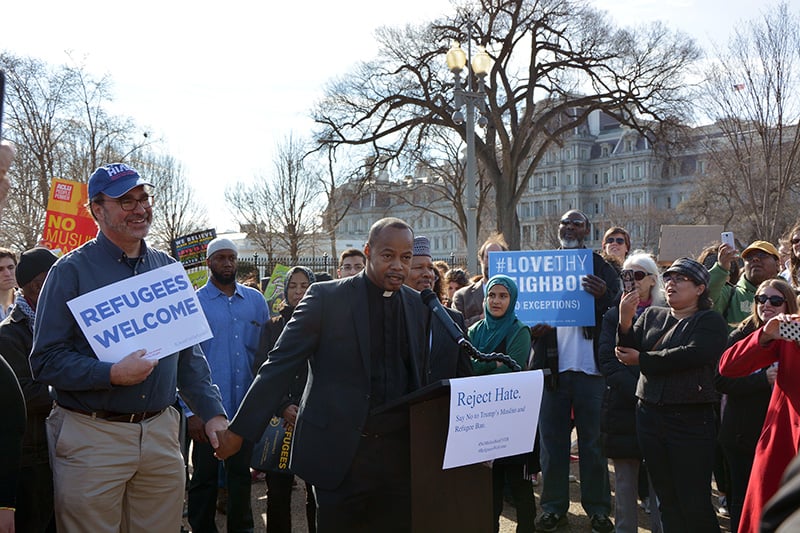 Mark Hetfield from HIAS, left, with CWS Interfaith Advocacy Minister the Rev. Reuben Eckels protesting the travel and refugee ban at the White House in Washington on Jan. 27, 2018. RNS photo by Jack Jenkins

Erol Kekic, senior vice president of the Immigration and Refugee Program at CWS, said the order would prevent local religious groups “from fulfilling their faith calling and missions to ‘welcome the stranger’” — a reference to a scriptural call to welcome others that appears multiple times in the Christian and Hebrew Bible.

Kekic was echoed by Krish O’Mara Vignarajah, president and CEO of LIRS, who called the order “cruel and shortsighted” and insisted that Jesus Christ was also a refugee.

“As we … embark in the holiday season and Christmas Day, that celebration of the coming of the world’s most famous refugee, we pray the courts will provide the relief that vulnerable children and families need right now,” she said.

She added that courts have repeatedly rejected efforts by states to refuse refugees, such as when several states — including Indiana, under the leadership of then-Gov. Mike Pence — attempted to disallow the resettlement of Syrian refugees within their borders in 2016.

Also on the call was Rev. Jack Amick, director of global migration at the United Methodist Committee on Relief, who argued the executive order is not only illegal but also “inhibits our ability to freely practice our religion.”

The faith leaders characterized the new policy as yet another blow to a decades-old refugee resettlement apparatus in the U.S. that relies heavily on religious groups. Six of the nine organizations that partner with the federal government to help resettle refugees are faith-based, including HIAS, CWS, and LIRS.

But recent years have seen the Trump administration drastically reduce the annual number of refugees allowed in the country. Whereas 110,000 refugees were allowed to be resettled in the U.S. during Barack Obama’s last year in office, Trump set next year’s limit at just 18,000 — a historic low.

The reduction has decimated the public-private partnership, with groups being forced to lay off staff and close offices, many of which were staffed by employees who were themselves former refugees.

The lawsuit was filed the same day Democratic members of the House and Senate introduced the Refugee Protection Act of 2019, which would set an annual refugee admission goal of at least 95,000, among other things.

HIAS, CWS, LIRS and several other faith groups have all endorsed the act. 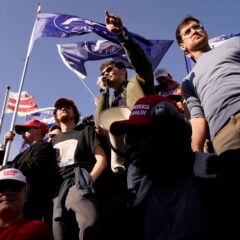