(RNS) — President-elect Joe Biden says Americans should be allowed to worship in person “safely” during the ongoing pandemic. But as cases of COVID-19 spike in the U.S. just weeks before major religious holidays, questions abound as to whether attending religious services in person can, in fact, be safe — and if Biden’s approach to the contentious issue will differ from that of the Trump administration.

Biden, a Catholic, voiced his support for in-person worship on Saturday (Nov. 21) as he left Mass at St. Joseph on the Brandywine in Greenville, Delaware. When asked by a reporter whether Americans should be able to attend religious services despite the ongoing pandemic caused by the novel coronavirus, the president-elect responded, “Yes, safely.”

The former vice president, who has attended in-person Mass regularly throughout the pandemic, did not detail what “safe” worship looks like. And so far, his staff isn’t offering any clues: Neither his transition team nor members of his COVID-19 task force responded to repeated requests for comment on this story.

Restrictions on worship in the U.S. have thus far been managed through dialogues between faith groups and local governments, and Delaware is no exception: The state recently updated its guidance for indoor gatherings — including religious services — restricting events in buildings to 30% capacity with a maximum cap of 50 people. Meanwhile, the Diocese of Wilmington, which oversees St. Joseph and encompasses all of Delaware, has directed churches under its purview to abide by the recommendations of state and local authorities.

In addition, the diocese requires worship participants to remain 6 feet from each other and wear masks, and discourages people with symptoms and vulnerable populations from attending. St. Joseph also lists extensive sanitation practices on its website, and a representative for the diocese explained that Communion in the region is performed without wine and under strict guidelines — including repetitive sanitation of the priest’s hands during distribution of the host.

“A lot of our parishes will have pews roped off or blocked off to facilitate social distancing,” the spokesperson said.

The debate over how — or even if — to worship in person during the pandemic has raged since states first began implementing measures to stop the spread of COVID-19 in March. Some religious groups were quick to suspend services altogether, choosing instead to worship online. The Unitarian Universalist Association has recommended all its member congregations cancel in-person services until May 2021.

But others have been less willing to halt or limit physical gatherings, decisions that have put them in conflict with local authorities. While most governors and local officials have granted religious groups at least partial exemptions from orders limiting the size of in-person gatherings, others have cracked down on houses of worship that disregard health protocols. 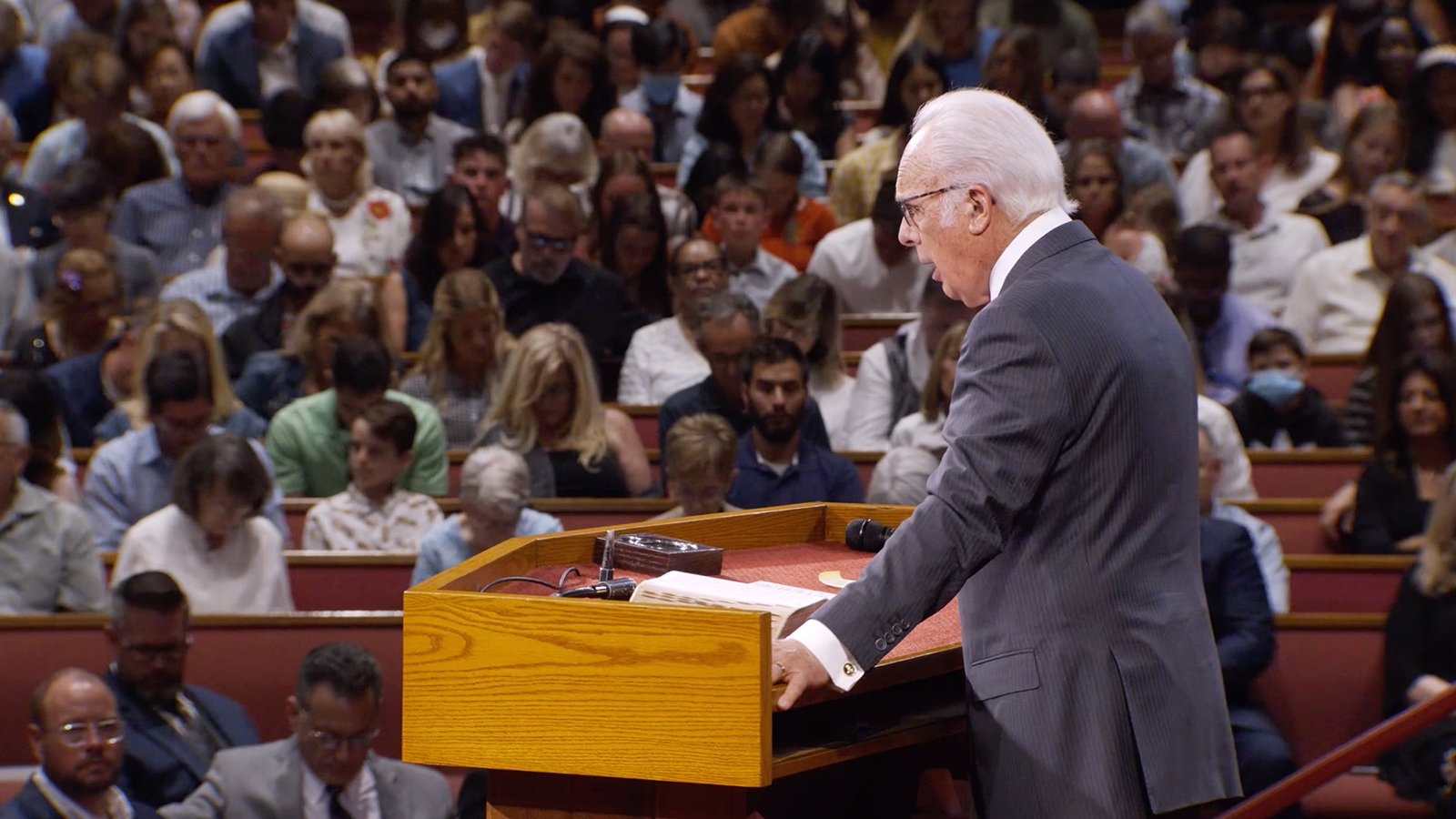 On Sept. 10, a Los Angeles Superior Court judge granted a preliminary injunction against pastor John MacArthur’s Grace Community Church, prohibiting it from holding indoor worship services, though it has continued to do so. At least two evangelical Christian pastors in Florida and Louisiana have been arrested this year for openly flouting local regulations, and police in New York City sparked controversy for repeatedly breaking up large Orthodox Jewish gatherings.

Evangelical Christian musician Sean Feucht hosted a series of concerts — some without permits — in cities across the country as part of his “Let Us Worship” tour, where large crowds packed together and sang loudly, many without masks.

Trump took up the cause of those demanding worship in May, when he declared houses of worship “essential services” in an attempt to pressure state governors into allowing faith groups to worship.

Supporters of worship restrictions note that numerous outbreaks of COVID-19 have occurred at religious gatherings, including a recent “superspreader” event that was traced back to convocation events at a North Carolina church: As of last week, 213 cases of COVID-19 and 12 deaths were linked to services there.

But others argue restrictions are a violation of religious freedom, with advocates filing numerous lawsuits in several states. The situation is poised to escalate: Two Orthodox Jewish synagogues and the Catholic Diocese of Brooklyn are asking the Supreme Court to suspend Gov. Andrew Cuomo’s order that limits religious gatherings to 10 people in high-risk areas of New York City.

Delaware’s restrictions on worship were also subject to a federal lawsuit that was dropped earlier this month after Gov. John Carney reached an agreement with faith leaders: He pledged not to impose a 10-person attendance limit on houses of worship and would list churches alongside other “essential” institutions in the future.

Biden, for his part, has modeled a different approach to pandemic safety than Trump, who contracted the virus himself and whose White House has repeatedly been the site of coronavirus outbreaks. By contrast, the president-elect has been spotted wearing a mask while entering church and called for a nationwide mask mandate during his campaign. 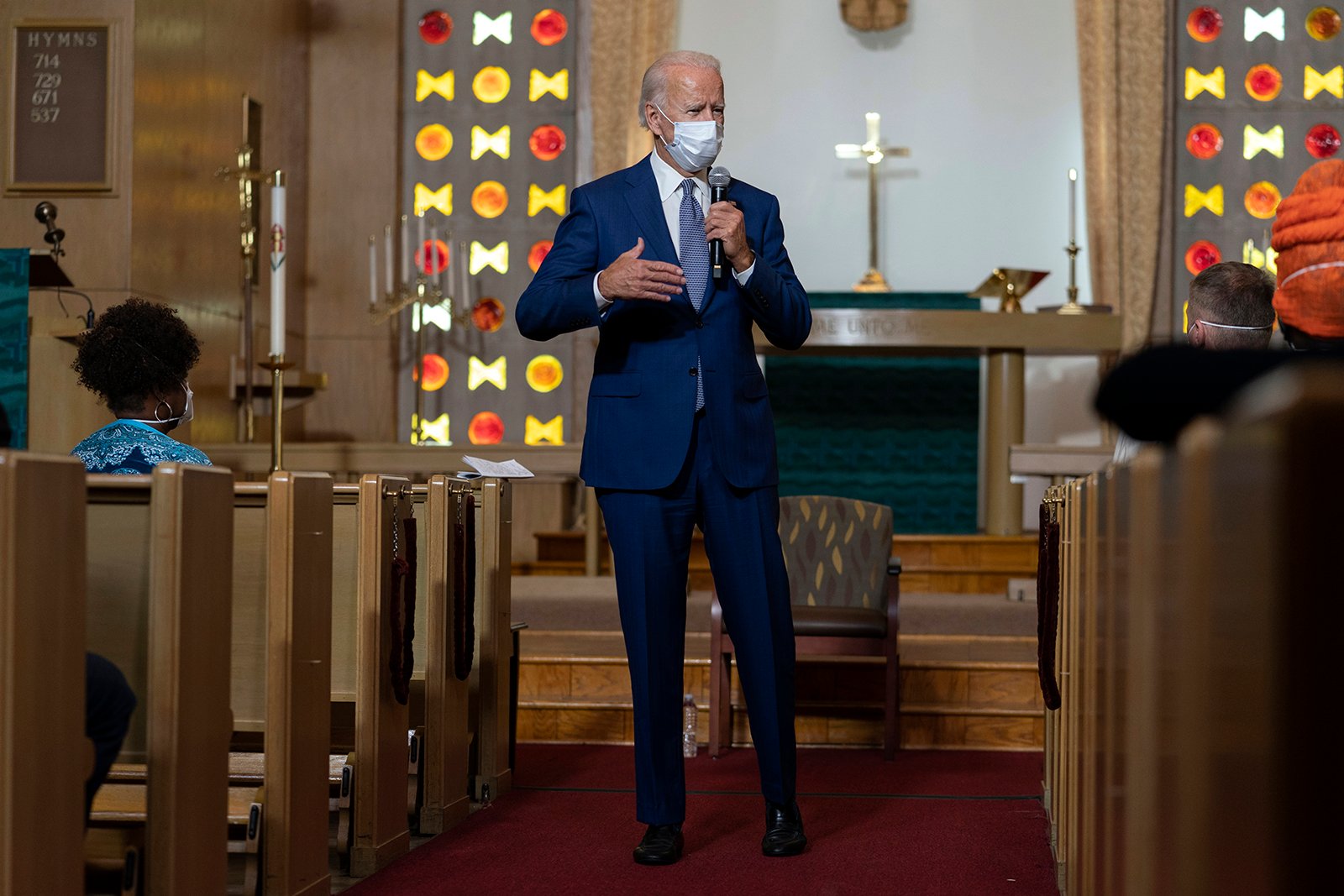 Democratic presidential candidate former Vice President Joe Biden speaks during a community event at Grace Lutheran Church in Kenosha, Wisconsin, on Sept. 3, 2020. The future handling of the coronavirus pandemic is near the top of the agenda for the Biden administration. (AP Photo/Carolyn Kaster)

Granted, even after his inauguration, Biden likely can’t enforce such a mandate; his transition website clarifies his team will work with governors and mayors to push mask mandates and ask Americans “to do what they do best: step up in a time of crisis.” But his administration could adjust Centers for Disease Control guidelines, which were hamstrung by the Trump administration: CDC guidance for reopening houses of worship was reportedly put on pause in May after White House officials disagreed with the agency’s restrictions on religious institutions, such as calling for limits on choir sizes.

Tightening up recommendations for religious groups would likely be welcomed by public health experts, many of whom have cautioned against in-person worship. In April, Michael Mina, assistant professor of epidemiology at Harvard’s T.H. Chan School of Public Health, told Religion News Service and other reporters that he is in “support of limiting those kinds of congregation (meetings) from happening because the ramifications extend well beyond those individuals.”

Some of Biden’s rumored candidates for secretary of health and human services have similarly voiced support for curtailing in-person worship — at least on a volunteer basis. North Carolina Secretary of Health and Human Services Mandy Cohen told a local news station in October that the “best” way to worship during the pandemic is virtually, and that other forms should be limited.

RELATED: The ‘chai’ charm that keeps this secretary of health grounded in the value of life

“If you can’t meet virtually — if you’re going to meet in person — meet outside, meet in smaller groups, and wear masks all the time,” she said.

Another one of Biden’s potential HHS picks, New Mexico Gov. Michelle Lujan Grisham, recently unveiled an order declaring that religious groups that operate indoors should limit gatherings to 25% capacity or 75 people, whichever was lower. The governor also encouraged all places of worship to “err on the side of remote or audiovisual services during the current public health emergency.”