WASHINGTON (RNS) — Christian musician Sean Feucht held a politically charged concert in front of thousands on the National Mall Sunday night (Oct. 25), framing his performance as a protest against restrictions on churches but also voicing opposition to abortion and celebrating the nomination of Amy Coney Barrett to the U.S. Supreme Court.

Throngs of worshipers braved colder temperatures and drizzles of rain in the nation’s capital, though the crowd appeared to fall short of the 15,000 people organizers had expected.

Nevertheless, neither the crowd nor Feucht appeared deterred by the weather at the event, where politics took centerstage alongside praise songs and preaching.

Billed as the culmination of Feucht’s nationwide “Let Us Worship” tour, the concert was originally focused on voicing frustration with restrictions on houses of worship during the pandemic. His performances have frequently featured large crowds singing in tight groups without masks, flouting local guidelines and the recommendations of health experts who note several outbreaks of COVID-19 have happened during worship services.

The singer has also received pushback from faith leaders for his efforts, and his planned concert caused controversy in Washington: Although the National Park Service oversees the National Mall and granted a permit for the event, it appears to have violated Washington’s COVID-19 restrictions, which prohibit gatherings of more than 50 people.

Feucht, who has been critical of media coverage of his tour, did not respond to requests for comment on this article.

Despite the tour’s previous focus on the pandemic, Feucht — who ran for Congress as a Republican this year in California but placed third in an open primary with less than 14% of the vote — was quick to draw attention to a different political drama unfolding in the U.S. Capitol building behind him on Sunday: The Senate held a procedural vote that same day on whether to place Judge Amy Coney Barrett, a conservative Catholic, on the U.S. Supreme Court. (The vote passed, and Barrett is expected to be formally confirmed to the court on Monday.) 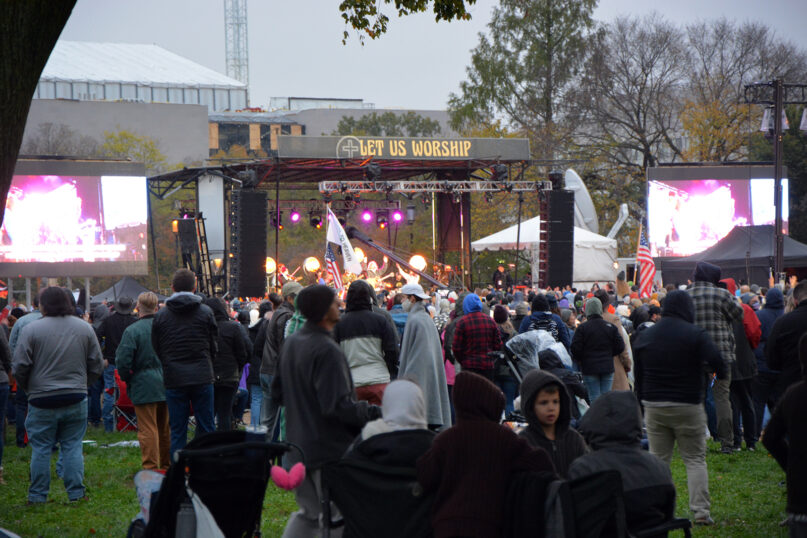 Feucht and other speakers at the event repeatedly drew connections between Barrett’s nomination and the anti-abortion movement. Shouting into the microphone, Feucht said that “we’ve been praying for this since 1973” — a reference to the year the Supreme Court issued its landmark ruling in Roe v. Wade that legalized abortion nationwide.

“Tonight is going to be a night where things shift in America for the unborn!” Feucht said, as the crowd cheered in response.

Barrett, whose faith has garnered widespread attention, reportedly signed on to an advertisement in 2006 opposing “abortion on demand.”

The political subtext grew even more explicit when Republican Sen. Josh Hawley of Missouri addressed the crowd, saying he had just voted to further Barrett’s nomination process. He then led the masses in prayer for her.

“Huge privilege to be on the Mall tonight with thousands & thousands of Christians gathered to worship & pray,” Hawley, who attends services at a congregation affiliated with the Evangelical Presbyterian Church, later tweeted.

Feucht, in turn, led the crowd in prayer for Hawley, calling on God to elevate “men and women of faith” into positions of political power.

Jentezen Franklin, an adviser to Trump who pastors the Free Chapel in Georgia, also delivered a seven-minute sermon at the event.

There was noticeable variability regarding mask use: While many people near the back of the crowd wore masks, most attendees packed tightly together near the stage did not.

The dynamic sometimes created divisions. A woman named Katherine, who traveled from Virginia to attend the event, was not wearing a mask. She argued that “there have been demonstrations all over this country, and there have not been any linked cases to COVID.”

Researchers from Northeastern, Harvard, Northwestern, and Rutgers universities reported in August that mass demonstrations against racism and police brutality that took place this summer were not a major cause of COVID-19 infection — although experts noted demonstrators were also more likely to wear masks. 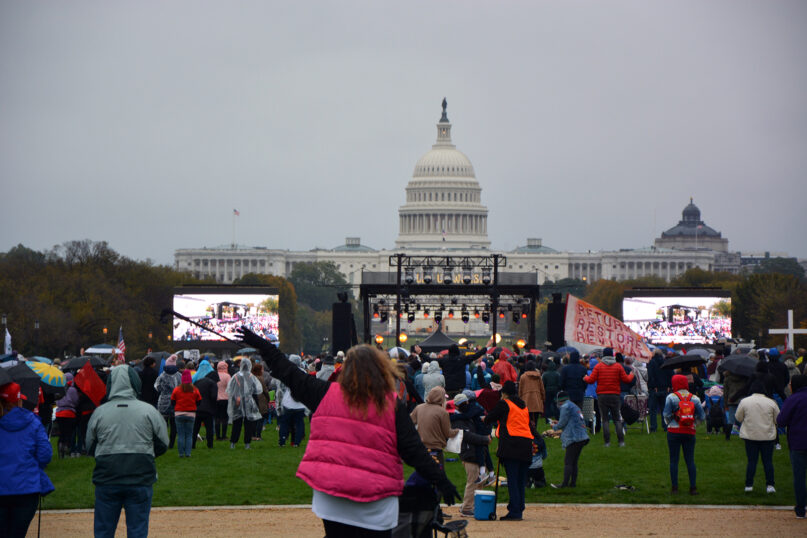 Meanwhile, Justin, a younger man who attended the event with Katherine to celebrate her birthday but also did not list his last name, was wearing a mask.

“I live in Philly, and I know people who’ve got COVID,” he said. “So, personally, I just stayed away.”

Katherine said her main motivation for being there was to worship.

“All the stuff going on in this nation right now — I mean, we need prayer and we need to worship the Lord,” she said.

Karen Arteaga, who traveled from Oregon to attend the event, agreed.

“We’re just here to pray for our nation,” said Arteaga, who sat in a lawn chair in the back and wore a mask.

She was one of many who traveled from out of town for the event. Keira and Damion Taylor said they flew in from Billings, Montana, where they own a Christian coffee shop.

“I think what Sean Feucht is doing is raising up leaders that are just going to be a voice in America today,” Damion said. “That is a voice that’s just glorifying to the Kingdom of God, and that’s something that we can be proud of and that’s honoring the Lord.”

“The fact that they’re closing down churches, that just doesn’t make any sense to me at all,” he said. “That just gives us an opportunity to then stand up for what we believe. I think it’s really special, actually.”

Bear also saw a spiritual connection between the event and the vote to put Barrett on the court.

“It almost seems symbolic, for sure.”

Not everyone was swept up by the political context, however. Josh Wade, who is from Washington, D.C., and is a member of a local evangelical church, stood alone near the back of the crowd next to a tree throughout the concert. When approached for an interview, he quickly put on a mask before explaining he attended the event out of a desire to return to in-person worship.

“During the pandemic, I’ve really been feeling this draw that in-person Christian practices are important,” he said, noting his church has resumed Sunday worship at limited capacity and with the use of masks. “COVID involves risk. But I started to feel this thing inside me that these Christian, in-person, community worship practices may actually be worth a degree of risk.”

When asked about the more overt political rhetoric spoken from the stage, Wade shrugged.

“I guess you can’t really escape the political aspect of Christians gathering in large numbers without masks on the Mall this close to an election,” he said. “However, that’s really not what brought me here. I like talking about politics and thinking about politics, but I’d probably pursue my political hobbies elsewhere.”