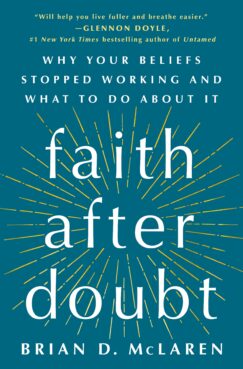 Brian McLaren’s new book “Faith After Doubt: Why Your Beliefs Stopped Working and What to Do About It” releases today. It’s the book I’m going to start recommending to all the people who write to me in desperation because their old faith seems to be slipping away, and the loss is making them feel angry and afraid.

Brian went through that process too—years ago when he was serving as a pastor. His main message is that there is faith after doubt, and that’s it’s not something to fear. Doubt is a catalyst in a natural evolution toward something beautiful.

Brian joined me last week by phone from his home in Florida, where his grandchildren are staying for the winter and doing remote school. This interview has been edited for length and clarity. –JKR

What made you want to write about faith after doubt?

Over these last 20 years, the volume of discontent among many people of faith has been crescendoing. I don’t think a week goes by where I don’t get an email or some social media message from people who are losing their faith, including plenty of clergy. This sense that something isn’t working, that things are falling apart for people, just seems to be avalanching.

Please walk us through the four stages of faith and doubt as you outline them in the book, starting with Stage 1.

I think we are all inducted into Stage 1, or Simplicity, in our childhood. This is the stage of simple dualisms: us/them, in/out, right/wrong, strange/familiar, safe/dangerous. Because we’re children and there’s a lot we don’t know, we need authority figures to tell us what’s safe. This is a natural and healthy stage for us as children.

Unfortunately, a lot of our religious communities tell us we’re never allowed to outgrow it, at least not in the realm of faith. But more and more religious communities are giving a hall pass to enter into Stage 2, Complexity, the stage of pragmatism. We realize we are players in a number of different games, each with a different set of rules. We’re mastering complex information and a whole set of skills so that we can become independent.

You might say that if Simplicity [Stage 1] is the stage of dependence, Complexity [Stage 2] is the stage of independence. In religion in Stage 2, we read books and go to conferences and listen to podcasts. We look for religious leaders who are coaches and can help us find success in our lives. The megachurch phenomenon really fits this mindset.

A lot of adults stay in Stage 2. But some—and increasingly, this is happening to younger people at earlier ages—are graduating from Stage 2. There are very few religious communities that give them any kind of affirmation for going into Stage 3, the stage of counter-dependence that I call Perplexity. We have to critique both the authority figures and the coaches.

What’s so difficult for religious people is the self-critique of Stage 3, and especially the critique of one’s own religion. So people get the “you are not wanted here” message from their religion. 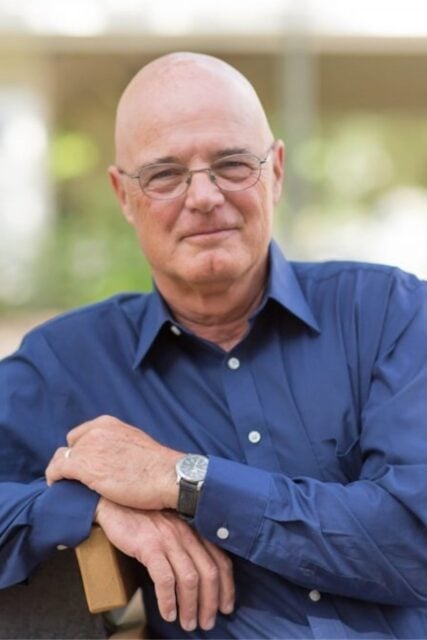 In this job and with the book I’m working on now I meet a lot of Stage 3 people who are angry at organized religion, and can’t get past that anger. What would you say to them?

It’s not an easy conversation to have with people. Some people are hurt and even traumatized by their experiences with religion. They need time to be angry, deeply angry, and to process that anger. So the first thing to do is tell them that they have every right to be angry.

But the time eventually comes when you can ask, “What are you going to become now, and what do you want to do? How are you going to make meaning out of even this negative experience?” One of the dangers we face in Stage 3 is that our meaning comes in alienation, or vilifying those who have hurt us. That’s an understandable reaction, but it can be quite destructive, especially for those of us who are parents. What our children need from us is a constructive vision of meaning in life. If all we can give them is resentment and disappointment, they will be nursing wounds that we created in them.

Stage 3 perplexity has a lot in common with adolescence. We’re hurt because we don’t fit in anymore, which shows that we still wish we could fit in. We still have a need to belong. So an opportunity for people at this stage is just to give them a community where they can belong regardless of what they currently believe, and give them the opportunity to observe people who have found a bigger meaning than the one they rejected.

You make a helpful distinction between belief and faith. How are they different?

Beliefs are propositions, or statements that we say are true. That was the definition of faith I grew up with: it was the development and management of correct beliefs, and little more. What that means is that you can be orthodox and also a racist, or a tyrant over your family.

That makes no sense. Jesus did not say, “By your beliefs you will know them.”

I would rather define faith as the way we orient ourselves to meaning and mystery. When we expand faith, there’s still room for robust discussion of beliefs, but we’re able to see that beliefs in themselves are not the point. That brings us to Stage 4, Harmony, where we start to see that love is the point. I use Paul’s verse in Galatians—which we should all know by heart—where he says the only thing that matters is faith expressing itself in love.

Expand on Stage 4. How would you describe it?

Stage 4 is integration, where we try to integrate all three stages and move beyond dualism, pragmatism, and skepticism. We don’t lose them, but we aren’t limited by them. There are things you’re able to see and understand and do in Stage 4, and paradoxes you’re able to live with and hold, and questions you’re able to occupy that you couldn’t before.

You note that there’s an element of Stage 4 that’s outside our control. People in the earlier stages will experience moments of grace that are unasked for, but it’s not like we can put “Achieve Stage 4 integration!” on a to-do list and force it to happen. So how does it happen?

For many of us, the only place we find companions for this is in books. Very often it’s the mystics who get us there—St. Teresa Of Avila , or St. Francis. Or for Muslims, it could be the discovery of the great Sufi poets, or for Jews it might be Abraham Joshua Heschel. And they say, “Oh, there’s another way of being Jewish, or Muslim, or Mormon. Maybe there is still a place for me.”

For me, the first inkling was through a poem by William Wordsworth. I think other people have experienced it through C. S. Lewis. In Mere Christianity, he has this rational, logical approach to faith, but in the Chronicles of Narnia, or Till We Have Faces, there’s this mystical dimension to Lewis, where some of the greatest truths can only be arrived at through imagination.

Stage 4 is about seeing things as a whole, and starting to see ourselves and others as connected. Rather than trying to separate ourselves or our group from other people, as we would do in Stage 1, or manipulate people into believing or behaving a certain way in Stage 2, or see through them in Stage 3, we try to see things as interconnected. People feel such reverence and humility about this way of seeing that they have to use words like “spiritual experience” to describe it.

You see a deep tension between religious organizations, which are often promoting a Stage 1 or Stage 2 approach to faith, and the individuals who are breaking through to something else. How does that conflict manifest?

If I look back on what’s happened in my lifetime, we have had a lot of people venture beyond stages 1 and 2—some to 3 and some even to 4. One of the problems, though, is that they haven’t found a way to speak to Stage 1 and 2 people to help them where they are and also help them move forward. What happens is that Stage 3 and 4 people just create their own little subcommunities around the margins.

What also tends to happen is that periodically, those Stage 3 and 4 people are purged by the Stage 1 and 2 people who feel threatened by their views.

What is your hope?

As I say at the end of the book, I think we need a critical mass of people to move to Stage 4. Our survival depends on that. Faith communities could play such a significant role in helping that happen—or keeping it from happening.

My deep hope for the book is that it will help people not lose faith, and also not be imprisoned in an unhealthy faith, but to develop and expand and grow their faith into the kind that we desperately need.

The age of Nones may favor churches that welcome doubters

Like Katy Perry, I broke up with the conservative evangelical project (by Brian McLaren)

Tackling the Bible with Brian McLaren: “We make the road by walking”

Flunking Sainthood
Are double ear piercings and sleeveless tops OK now for Mormon teens?
Follow us on Facebook!
Submit your photos to RNS