Update 4:37 p.m. EST: The Church of Jesus Christ of Latter-day Saints has just issued a statement titled “Church Leaders Condemn Violence and Lawless Behavior During Times of Unrest.” The full text can be read here. Among the highlights, the statement says that Church leaders “condemn violence and lawless behavior, including the recent violence in Washington, D.C. and any suggestion of further violence.” As well, it closes by saying, “We urge all people to remember the precious and fragile nature of freedom and peace. As citizens of the United States look ahead to the Inauguration of a new President, we urge our members to honor democratic institutions and processes, and to obey, honor, and sustain the law (see Articles of Faith 1:12).”

(RNS) — It’s been over a week now, and there is still no official word from the Church of Jesus Christ of Latter-day Saints about the violent insurrection that took place at the U.S. Capitol on January 6.

I have heard frustration about this silence from several readers, and on social media. One reader, Adam, gave me permission to share from his experience.

Noting that at least one Capitol rioter was dressed as Captain Moroni from the Book of Mormon and that a much-publicized participant, Josiah Colt, is a returned missionary for the LDS Church, Adam contacted the Church this week “to politely ask why the Church has made no statement and to express my concerns.”

He was told that “the Church does not make statements on issues that are not global in nature,” which he thought was strange considering that the Church had weighed in on other issues that were U.S.-only or even Utah-only.

I also mentioned that the Church spoke out against some of the statements and policies of the early Trump administration, such as the travel ban from predominantly-Muslim countries. I was told that both of those issues were “global” issues.

“Medical marijuana in Utah?” I responded. She argued that, yes, it was a global concern, as marijuana legalization could spread globally. I argued that it was FAR easier to argue that an insurrection against Congress has global implications than that medical marijuana legalization in Utah does. I pointed out that the Pope had issued a statement, even though the Catholic Church is not even headquartered in the U.S. and that, despite what the Church’s intentions may be, our silence conveys that we are aloof or out of touch with what’s going on.

Of course, I could have brought up many more issues that the Church has gotten behind that are either less important or “global” in their scope, including the Prop 8 battle, the Supreme Court ruling on gay marriage in the United States, anti-discrimination laws in Salt Lake City, etc. I ended the call by asking if there was any way that my concerns could be raised to the Church and the public affairs department. She promised they would be, and told me that many others have called with similar questions and concerns.

So this week I also phoned the Church’s Public Affairs department to ask about a statement. The first person I talked to confirmed that the department has been referring callers and inquirers to Pres. Dallin Oaks’s very pointed statement from the October General Conference. Specifically, the Church called attention to this portion of his “Love Your Enemies” talk:

“[Obeying the laws of the land] does not mean that we agree with all that is done with the force of law. It means that we obey the current law and use peaceful means to change it. It also means that we peacefully accept the results of elections. We will not participate in the violence threatened by those disappointed with the outcome. In a democratic society we always have the opportunity and the duty to persist peacefully until the next election.”

This was good to see, but I will look forward to the Church taking this message to the general public.

How much effect would such a statement have, though? It’s a good question. I confess that although I think it is extremely important for the Church to unequivocally condemn the Capitol violence and the lies that the Trump administration has peddled that precipitated that violence, I’m skeptical that it will do much good.

For starters, the power of institutions has been waning in nearly every segment of American life. This even affects the LDS Church, which has been forever changed by the same transformations that have swept through American life in the last quarter century — the advent of Internet discussions and multiple narratives, social media enclaves that reinforce people’s echo chambers, and the like. The Church is still a powerful force in the lives of its members, but it’s a strong voice among many, rather than the only voice members hear.

More significantly, the polarization of the United States in matters of religion and politics is too deep for official statements to make much difference. What has become clearer than ever in the last week is that Americans’ minds are made up. Survey research from Axios released earlier this week has shown that Trumps’ supporters still entirely believe in him, despite all evidence that the election was conducted legally and fairly.

“The core of the President’s base remains steadfast with just over a quarter of Americans and nearly two-thirds of Republicans supporting his contesting of the election results,” Axios said. In the GOP as a whole, 64% said they support Trump’s recent behavior.

What this means, depressingly enough, is that if/when the Church issues a statement condemning the violence and reminding members of President Oaks’s wise counsel about accepting the results of elections, it will do little than reinforce people’s existing ideas.

At the Capitol, we saw the best and worst of US Mormonism 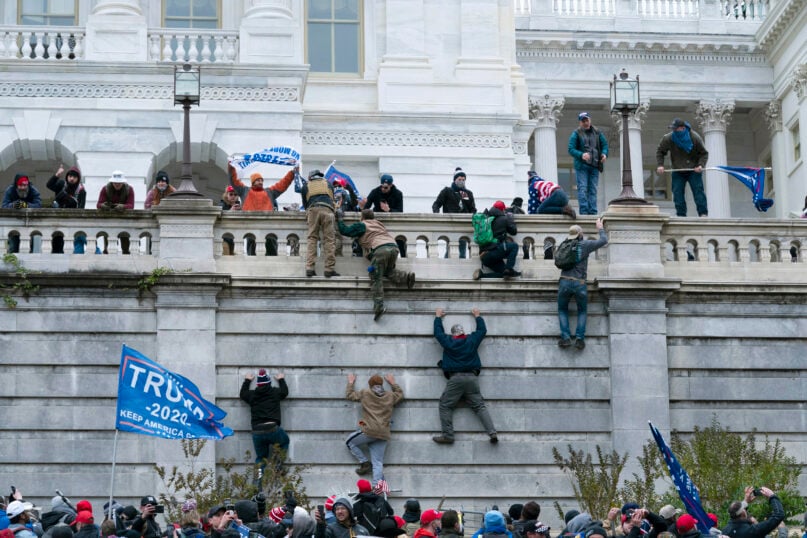 Supporters of President Donald Trump climb the west wall of the the U.S. Capitol on Wednesday, Jan. 6, 2021, in Washington. (AP Photo/Jose Luis Magana)