(RNS) — President-elect Joe Biden plans to be sworn in with his hefty family Bible when he becomes the 46th president of the United States on Wednesday (Jan. 20).

It’s one of many ways religion will be a facet of the inaugural activities surrounding the country’s second Catholic president.

“it’s just been a family heirloom on the Biden side of the family and every important date is in there,” Biden said in a December appearance on “The Late Show with Stephen Colbert.” “Every time I’ve been sworn in for anything, the date has been on that and it’s inscribed in the Bible.”

The Bible is so big — with a leather cover, metal clasps and 5 inches of thickness — his wife, Jill Biden, held it with two hands when he was sworn in as President Barack Obama’s vice president.

Vice President-elect Kamala Harris plans to use two Bibles, one used by Thurgood Marshall, the first Black Supreme Court justice, and the other by family friend Regina Shelton, said a spokesperson for the Presidential Inaugural Committee. Harris put her hand on the friend’s Bible during her swearing-in ceremonies as U.S. senator and California attorney general.

In a salute to its graduate, Howard University’s Andrew Rankin Memorial Chapel plans to ring its bell 49 times in honor of Kamala Harris, the 49th vice president, on Inauguration Day, the spokesperson said.

On the eve of the inauguration, ringing church bells and illuminated buildings across the country were set to join with an official COVID-19 memorial for the 400,000 people who have died in the U.S. from the coronavirus pandemic. The Bidens, Harris and second gentleman Doug Emhoff viewed the first-ever lighting around the Reflecting Pool on the National Mall with 400 lights.

“The inauguration of President-elect Joe Biden and Vice President-elect Kamala Harris represents the beginning of a new national journey — one that renews its commitment to honor its fallen and rise toward greater heights in their honor,” said Presidential Inaugural Committee CEO Tony Allen in a statement. “In that spirit, it is important that we pay tribute to those we have lost — and their families — and come together to unite our country, contain this virus, and rebuild our nation.” 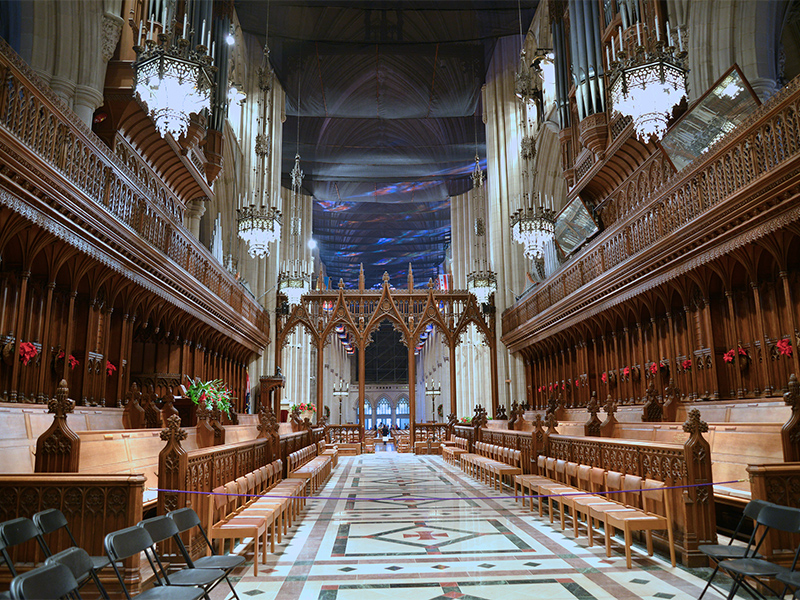 The choir loft of the Washington National Cathedral. Photo by Francisco Daum/Creative Commons

Before the inaugural ceremony, the Rev. Kevin O’Brien, president of Santa Clara University and a Jesuit priest, will officiate a Mass Biden will be attending with a bipartisan delegation Wednesday morning at the Cathedral of St. Matthew.

Beyond the invocation and benediction at the inauguration itself, and a virtual inaugural prayer service Thursday at the Washington National Cathedral, unofficial events will mostly be online and far different from the festivities of previous years.

Four years ago, some Washington churches opened their doors for people who wanted to watch the inauguration of President Donald Trump or resist some of his administration’s planned actions. New York Avenue Presbyterian Church, for example, offered spectators on Inauguration Day 2017 a big screen in the room where it traditionally has hosted homeless people for Sunday breakfast.

But this year, the lockdown and security fencing in downtown Washington after the Jan. 6 storming of the U.S. Capitol — as well as pandemic restrictions — have caused changes in plans.

“(W)e’re choosing to not open next week, heeding the advice of local and federal authorities for people to stay home,” the Rev. Heather Shortlidge, transitional pastor at New York Avenue, which is three blocks from the White House, told Religion News Service in an email message a week before Inauguration Day.

People of faith across the country planned to take part in prayer and organizing events in the days leading up to or after the inauguration.

Latino leaders of evangelical, Pentecostal and historic Protestant churches set a public prayer vigil on Facebook for Tuesday evening, focusing on Biden and the nation.

“Latino church leaders urge all people of faith to join together in prayer for our nation during this critical time in our history,” said the Rev. Carlos L. Malavé, executive director of Christian Churches Together. “We hope that all Christian leaders will reject acts of violence that try to subvert our democracy and threaten the lives of political leaders, law enforcement personnel, and the public.”

Dozens of organizations — including Faith in Action, Multifaith Voices for Peace and Justice and the International Society for Krishna Consciousness — are partnering for “The People’s Inauguration,” a virtual 10-day initiative that will start on Thursday, the day after the inauguration. The series of events are led by Valarie Kaur, a Sikh activist and founder of the Revolutionary Love Project, who will be a speaker at the Thursday interfaith prayer service at National Cathedral.

Described on its website as an effort to create an “anti-racist, equitable, and sustainable” nation, the multiday initiative will feature teach-ins, vigils and musical and artistic events.

The initiative organizers have asked participants to take an oath, modeled after the one Biden will state when he becomes president: “I, (insert name), do solemnly vow that I will faithfully execute my role in healing, reimagining, and rebuilding our country, and will to the best of my ability, preserve, protect, and defend dignity, justice, and joy for myself and for all around me, and that I will do so with love.”

Signs of the Times
Workers deserve a living wage, not just a minimum wage