As an editor who deals primarily with nonfiction, I’m often encouraging my authors to put themselves in their readers’ shoes. It’s surprising how many authors don’t think seriously about who the reader is and what the reader needs.

That’s how I feel about the Church’s temple prep class, to be frank. It does a fine job answering questions that most people don’t ask when they’re going to the temple for the first time. Questions like, “What was the role of temples in ancient times?” instead of, “What the heck is this green apron and what will I do with it in the temple?”

Along comes an independent temple preparation guide from Rosemary Card, the young founder and CEO of the temple clothing company Q.NOOR. House of Light: Your Guide to the Temple addresses the questions and needs that people actually have.

This is becoming a most excellent habit for Card when it comes to the temple: when she sees a need, she doesn’t complain about it. She fills it. The idea for her future company got started when, in 2010 as she was preparing for her mission, she was disappointed in some of the old-lady stylings of white temple dresses. A former fashion model and the author of the memoir Model Mormon, she launched a business five years ago to design beautiful temple dresses for a new generation.

This 93-page digital download is like that: born from the needs Card felt herself and witnessed among the people she knew. It answers readers’ real-world questions in the first half, then delves into theology and covenants in the second.

She decided what topics to cover based on more than 1,000 responses to a survey she did of her customers. How did they feel about their temple prep class? What did they wish they had been told?

As well, she relied on her own temple experience. She was 21 in 2010 when she attended the first time, shortly before serving a mission in Arizona. It was mostly positive, she told me in a Zoom interview, “other than those little moments where I didn’t know what was happening.” 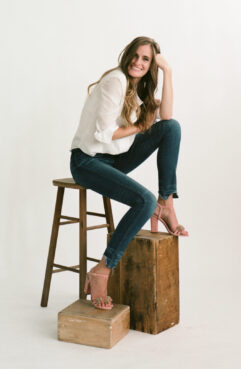 One of those moments came early on, in the washing and anointing. “I remember feeling nervous in the initiatory, because my mom had said ‘I’ll be with you the whole time,’” Card said. “And then right at the beginning of the initiatory, my mom wasn’t there. I had no frame of reference. Why was I standing in this tiny space with this woman? How long was this going to happen?”

So in the guide, Card walks readers through the four compartments of the initiatory area, even providing a diagram of the layout. She doesn’t explain what words will be spoken or reveal anything sacred, but she tells readers the basics that everyone wants to know: the initiatory will take about seven minutes, your escort will be waiting right outside the whole time, and it’s a really good idea to go to the bathroom at some point before you head into the endowment ceremony. (That was advice she wishes someone had given her before her first time in the temple.)

For the endowment, she offers a piece of advice that I wish someone had told me beforehand: that I would not be expected to memorize every piece of information that was given to me and repeat it verbatim at the veil. Seriously, no one ever reassured me that there would be someone helping me at that critical moment. This meant that I spent the majority of my first endowment experience in a near-panic attack that felt like those nightmares where you find out you have to take a final exam in a course you didn’t remember taking. (That’s not just me having that nightmare, right?)

Card takes a sensible and open approach to those elements of the temple experience Latter-day Saints are permitted to discuss—which, as she points out, is actually most of it.

“I’ve created a more comfortable experience around talking about things other than tokens and signs, the specific things I’ve promised not to share,” she said.

That includes going through each of the five covenants that people will make in the endowment ceremony: the laws of obedience, sacrifice, the gospel, chastity and consecration. Failure to talk about those covenants in advance, she says, has resulted in harmful experiences for some people.

“One of my friends was so anxious about what she was going to covenant to that she just went online and read the whole ceremony beforehand, and then felt guilty about doing that.”

She applauds the Church for its greater transparency in the last couple of years about covenants: in 2019, Elder Bednar listed them in a General Conference talk, and just this month, the updated and revised Church Handbook of Instruction spells them out for the first time (section 27.2).

She’s also happy that in the decade since she first attended the temple, there’s been greater openness about discussing and showing the temple garments and sacred clothing. The Church’s 2014 video depicting and explaining these items represented a big step forward.

Although the Church is more open than ever to discussing these aspects of the temple, not all members have gotten the memo that it’s kosher to do so. Since Card’s download first became available for sale last week, she’s received criticism from members who think the whole project is a mistake.

“There have been people who have said, ‘Is this endorsed by the church?’ To which I respond, ‘The Church doesn’t endorse books.’” And some who think “nothing about the temple should be talked about.” One person who heard about the book but had not read it fretted for Card’s eternal soul.

But these reactions have been far outweighed by many positive comments, including from one woman who was able to download it the night before she was scheduled to attend the temple for the first time, just in time. Others have said that having the guide makes them more comfortable talking about the temple with their kids, or that having it to read has made them think more carefully about covenants and temple worship.