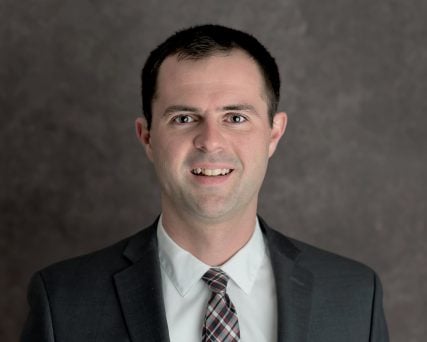 (RNS) — Ryan Burge is a political scientist at Eastern Illinois University, but he’s also a Baptist minister. For him, questions about the growth of nonreligion aren’t just theoretical. They’re personal too. During the decade or so he was finishing his academic training and starting a family, he saw membership at the small congregation he was pastoring drop by half.

“What was happening in American religion was also happening right in front of me,” he says in his new book, “The Nones: Where They Came from, Who They Are, and Where They Are Going.”

This is a book that draws on academic research but is written for ordinary people — hooray! It’s a slim volume of only about 150 pages with no sociology jargon. There are no p-values or alphas or deltas. Just straight-up information about the questions a lot of people have about religion — and nonreligion — in America today.

This Zoom interview has been edited for length and clarity. Religious disaffiliation has risen in every generation, including even older Americans, though the sharpest spike in nones is occurring with the millennials.

First, let’s talk about evangelicals. You point out in the book their retention isn’t actually quite as bad as the media may have made it sound. If you only start in 1993, which is the peak of evangelicalism in America, then the number of evangelicals goes down from that spot. But if you look at the whole period from 1972 (when evangelicals were 17% of the U.S. population) to 2018 (21.5%), there’s actually a slight trend upward. The most intellectually honest narrative is evangelicals are relatively stable, and the peak from the late 1980s to the early 1990s (30%) was when they were overcooked.

But churches are a leaky vessel by nature. They lose people through death, and an aging population is so acute for several traditions in the U.S. — mostly mainline Protestantism, but evangelicals are also aging rapidly now. And defections are up. You’ve got to add people into the cup to see the water at the same level. We can all agree the birth and retention piece provides a much more stable stream of members than the conversion piece. Most churches don’t grow by bringing new people in, but by keeping their young people in their tradition as adults. Evangelical retention is still surprisingly good (69% from 2010 to 2018), especially compared to mainline retention (55%), though it is declining. Although retention for nones started out poorly, with only about a third of those who grew up with no religion staying disaffiliated as adults, it has risen by nearly 30 points. Today, nearly two-thirds of people who are raised as nones are still nones in adulthood, and we’re starting to see second- and even third-generation nones.

In the book you give several possible reasons why more people are leaving religion, including the influence of secularization and the growing polarization of politics. But you also note part of what we’re seeing is the removal of a “social desirability bias” about religion. Can you explain?

People lie on surveys. We give it an academic name, “social desirability bias,” but it means people want to give an answer on a survey that seems good but is not true. America is still by default a religious country. That’s waning over time, but it means when people are asked how often they go to church, they tend to inflate that. If they go three times a year, they will say they go once a month.

What I tried to do in the book is say is what we should see is that as the number of “nones” went up, the share of Christians who say they never attend church should go down. If I was a Christian who never went to church 30 years ago, today I could say I am a none because it is more socially acceptable now. So what we should see is the share of never-attending Christians drop as the nones rise. But we don’t see that. The never-attending is still going up, and the nones are also going up. Both things are rising at the same time.

Are the Christians who still claim the identity but are no longer attending people who are on the way out?

Probably. I think the never-attending category is a kind of way station. Most nones are “somes.” Church attendance is the first thing that goes, then belonging and finally belief — in that order. Belief goes last. The “double hockey sticks” phenomenon: Religious disaffiliation has risen at a fairly equal rate among both men and women, though the numbers are higher overall for men.

One of your key arguments is as the nones have grown in size, they’ve also gotten a lot more diverse. Can you talk about what that means for gender and race?

Regarding gender, men have always been more likely to be a none than women. The gap between them has stayed shockingly consistent back to 1972. It’s really stunning how the lines don’t converge. It’s the hockey stick effect. There is some evidence the gender gap is getting slightly larger, but only by a point or two. And in general, people without children are a lot more likely to be nones than people with children, and that’s true for both women and men.

In terms of race, the nones have grown among all groups but not at the same rate. It’s clear from the data Asian Americans are the outlier here. Thirty percent of them identified as nones in 2008, which was 10 points higher than white, non-Hispanics. By 2019, nearly 40% of Asian Americans had no affiliation. During the same time period, disaffiliation among whites rose 13 points, and for African Americans it rose just a bit more (18% to 32%). Hispanics have seen the slowest growth in the nones, with only 30% indicating no affiliation in 2019.

However, what label each racial group chooses is noteworthy. For instance, 40% of white nones are atheists or agnostics. It’s 35% of Asians and 28% of Hispanics. African American nones stand out in that only 14% say they are atheist or agnostic, likely a result of the pervasive stigma against atheism in their communities.

“Allergic to religion”: Conservative politics can push people out of the pews, study shows

Nones now as big as Catholics, evangelicals in the US

Flunking Sainthood
I support gun control laws as a doctor and a father — and a Mormon
Follow us on Facebook!
Submit your photos to RNS