(RNS) — To paraphrase Shakespeare: In the Jewish world, this has been the “summer of our discontent.”

First, there was Gaza.

Then, there was the pandemic of antisemitic incidents that followed.

Then, Unilever, owner of Ben & Jerry’s, announced that it will no longer sell its famous ice cream brand in the occupied territories of the West Bank.

And now, “My Unorthodox Life.”

For those who have been living in a Wi-Fi-free cave for the past month, “My Unorthodox Life” is a Netflix series about Julia Haart — the fashion designer, entrepreneur and CEO of Elite World Group — and her family. It focuses on Julia’s decision to leave the strictures of ultra-Orthodox Jewish life in Monsey, New York, and to enter secular life — or, at the very least, non-Orthodox Jewish life.

As Julia herself put it for Jewish Telegraphic Agency:

I applaud that, of course.

So, is this reality television series “good for the Jews”?

I cannot say whether or not it is good for the Jews. I will say this: It is not good for television. I could barely get through a single episode of a series that seems to be portraying the lives of people who are utterly uninteresting and superficial. “My Unorthodox Life” is just God-awful. 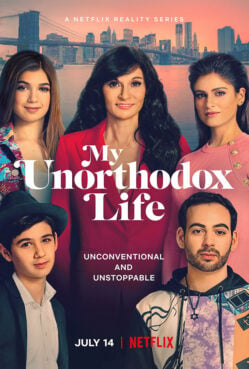 “My Unorthodox Life” on Netflix. Image courtesy of Netflix

“My Orthodox Life” is part of the “let’s criticize Orthodoxy” genre. There was “Unorthodox,” starring the immensely popular Shira Haas, based on Deborah Feldman’s memoir. There was “One of Us,” about formerly Hasidic Jews.

“Rabbi, why can’t they just show Orthodox Jews being happy with their religion? Why does it have to be about Orthodox Jews who have walked away from their strict faith and observance?”

Imagine “Madame Bovary” without her inner struggles. Imagine a contented Holden Caulfield. Imagine an un-conflicted Hamlet. There would be no dramatic or literary “there” there.

RELATED: Netflix’s ‘My Unorthodox Life’ is an exposé that fails to explain some basic facts

People being happy about the current state of their lives is simply not great literature. Drama is the child of discontent and tension.

“Yes, but why do ‘they’ always have to go against the Orthodox?”

Yes, we Jews are feeling besieged. Visibly Orthodox Jews have been the targets of hate crimes. I understand why we would feel particularly raw and sensitive about public criticism of Jewish law and customs — even if we do not adhere strictly to them.

So, yes, this anti-Orthodox fad hurts. Except the Jew-haters are not watching those shows. They don’t need to.

“Rabbi, how can this possibly be good for religion in general?”

Let us admit: There is a particular place in the snarkaverse for those who love to poke fun at religious orthodoxies.

How could it be otherwise? The findings of the current Pew report make it clear:

The proportion of Americans who consider themselves members of a church, synagogue or mosque has dropped below 50 percent, according to a poll from Gallup released Monday. It is the first time that has happened since Gallup first asked the question in 1937, when church membership was 73 percent.

“So, Rabbi, wouldn’t you say that ‘My Unorthodox Life’ is self-hating — perhaps even antisemitic?”

I do not like the term “self-hating.” It shuts down conversation, as well as inappropriately trying to discern what is happening within the inner life of a critic.

But, neither is “My Unorthodox Life” antisemitic. Actually, quite the contrary.

So, in that milieu, what could possibly be wrong with, say, “The Real Housewives of Monsey?” Jews are part of the culture — even (I write in a state of disappointment), low-brow culture.

Let me return to my original point — that literature and drama emerge from the stories of people who struggle, and who are in the midst of some kind of journey, either outward or inward.

To show religious people developing intellectual and spiritual issues with the traditions that they have inherited — that is “dog bites man.” Ho-hum.

In our religion-challenged time, you know what reality show I would like to see, and that I think we need to see?

Show us the story of a secular person who has decided that true transcendence exists; a person who knows that they are not the sum of existence; a person who runs into a larger Story that hits them with all the light and fervor of the burning bush.

In short, show us a story about someone coming to faith — a reasoned, “nonfundamentalist” faith that speaks to the mind, the soul and the inner struggle.