(RNS) — The Church of Jesus Christ of Latter-day Saints has added a new section to its official handbook for lay leaders, calling on members to support refugees in their local communities. In doing so, the faith’s governing body has enshrined the issue in one of its most influential texts, where it is likely to remain for years to come.

In addition, authors of the General Handbook have added new language admonishing members not to let politics drive a wedge between them.

The insertion on refugees is brief. “Church members offer their time, talents, and friendship to welcome refugees as members of their communities,” it reads in part. Supporting the call to action are two scriptures: one from the Book of Mormon and the other the Book of Matthew, both centered on the need to care for the poor.

Announced Aug. 4, the addition marks the latest in a series of attempts by Mormon leaders to elevate the issue among its global membership. The faith’s First Presidency, the highest-ranking body in the church, called on members to seek local opportunities to assist in refugee resettlement in a 2015 statement. The following year, church leaders launched the “I Was a Stranger” campaign, an ongoing effort directed at connecting Latter-day Saints with local organizations serving refugees.

“The focus has really been on refugees since then,” said Laurie Maffly-Kipp, a professor of history and religion at Washington University in St. Louis, adding that female leaders in particular have taken up the cause in earnest.

“It’s been an effort, both at the grassroots and in the leadership from the Relief Society, to get women and families in particular involved in care of refugees,” she said, referring to the church’s women’s organization.

Denise Swanson was 13 when her family fled Chile’s military dictatorship for Canada. The seven of them landed in Quebec, where they had no friends or family. As Latter-day Saints, they did have the church, however. Local members rushed to their aid, registering the children for school, providing hot meals and furnishing their new apartment.

“I don’t think we could have done it without their help,” she said.

Not every Mormon she’s encountered on her journey has been equally welcoming. In 2002, she married a Utah native and moved to the United States. Once here, she quickly observed a “disconnect” between the help some Mormons were happy to offer to individual refugees and immigrants in their own congregations, and their views toward refugees and immigrants as a group.

“I hear people complain about immigration or immigration reform, but at the same time be willing to help immigrants in the ward,” she said. Some of the more conservative members she encounters aren’t even open to doing that much. 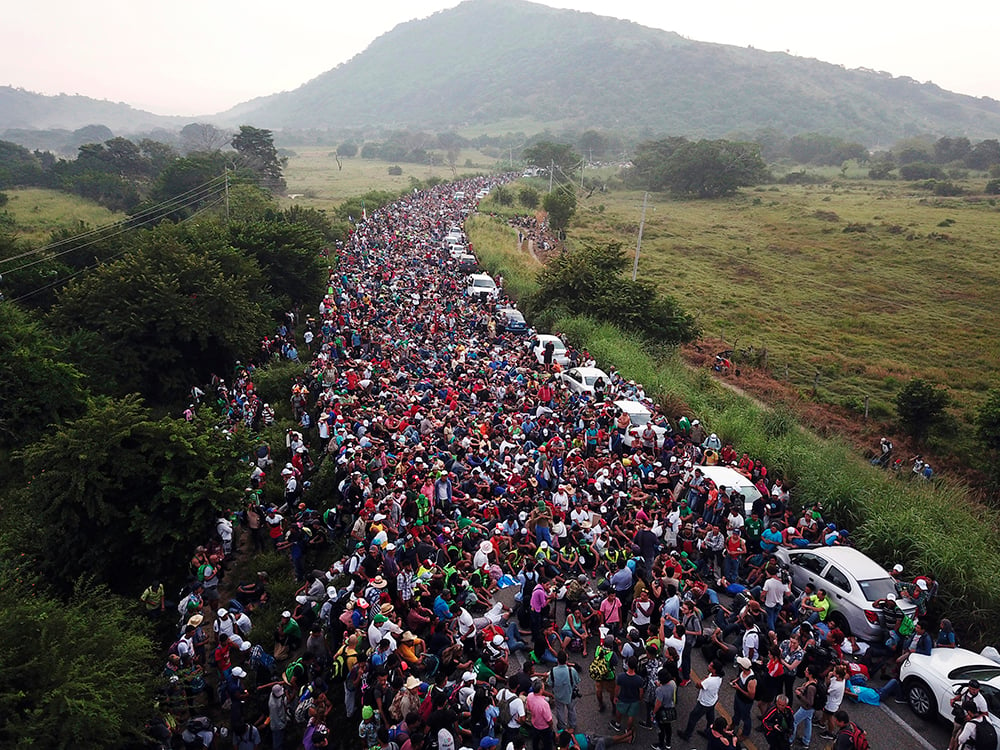 Members of a U.S.-bound migrant caravan stand on a road after federal police briefly blocked their way outside the town of Arriaga, Mexico, on Oct. 27, 2018. (AP Photo/Rodrigo Abd)

Swanson said it has warmed her heart to see the church become more active and outspoken in support of caring for refugees in recent years, even if she’s skeptical it will be enough to convince more resistant Latter-day Saints to come around on the issue.

“I feel like in some areas the members aren’t really taking that message to heart,” she said.

There’s evidence to support her pessimism. In March, the church added a section to the handbook encouraging members to “safeguard themselves, their children, and their communities through vaccination.” Five months later, the vaccination rate for Utah County, home to one of the highest percentages of Latter-day Saints anywhere in the country, is just 37% .

Meanwhile, a study by PRRI and Interfaith Youth Core found that only half of Mormons in the United States say they have been vaccinated or definitely plan to be.

Tucked amid these clear statements on highly politicized topics are other revisions aimed directly at defusing political tension among members. The latest version of the handbook discourages members from judging one another for their political beliefs or using church meetings as a setting for political advocacy. “All should feel welcome in church settings,” it states.

According to Maffly-Kipp, statements like this one represent church leaders’ hope to “try and create some kind of middle ground” in an increasingly polarized society, particularly in the United States. “The question is whether both the right and the left will let them.”

Rob Taber is ready to oblige. Besides teaching history and government at Fayetteville State University in North Carolina, Taber is the national director at Latter-day Saints for Biden-Harris. He called the new language “most welcome,” noting that in the past, he’s watched in alarm as some have used church buildings, lessons and resources such as membership lists for “electioneering purposes.”

“Moving forward, I hope that we can focus on our shared testimony of Jesus Christ and the Restoration and what these truths mean for us, our family and our communities,” he said. Others are less thrilled. The way commenters on the far-right LDS Freedom Forum see it, statements like these are slowly stripping the church of its power and purpose. What’s left, said a user known as Chip, is “a zero-energy nothing-burger event.”

(Tamarra Kemsley writes on the intersection of faith and politics. Follow her on Twitter @tamarranicole. The views expressed in this commentary do not necessarily reflect those of Religion News Service.)