(RNS) — Fifty percent of Mormons in the United States say they have gotten or will definitely get vaccinated against COVID-19, while the other half are either “vaccine hesitant” or “vaccine refusers,” according to a recent study by PRRI and Interfaith Youth Corps.

I want to be cautious about these results because the number of Latter-day Saints in the sample was small — 105 people out of 5,625 respondents overall. This means the margin of error is relatively high.

Still. the PRRI/IFYC findings are sobering.

First, there’s the main finding. Just half of Mormons are vaccine accepters, while a third are vaccine hesitant, meaning they said they will either “wait and see how the COVID-19 vaccines are working for others” or they “will only get a COVID-19 vaccine if required” to do so.

The remaining 17% said they would not get a vaccine at all. Second, these Mormons apparently are hesitant or refusing even though two-thirds of them agree vaccinations are an important way to love their neighbors.

While a slim majority (53%) of Americans agreed with the statement “Because getting vaccinated against COVID-19 helps protect everyone, it is a way to live out the religious principle of loving my neighbors,” a clear two-thirds majority of Mormons did.

In fact, Mormons ranked second among all the religious groups surveyed in the percentage who agreed getting vaccinated was a loving and principled thing to do. 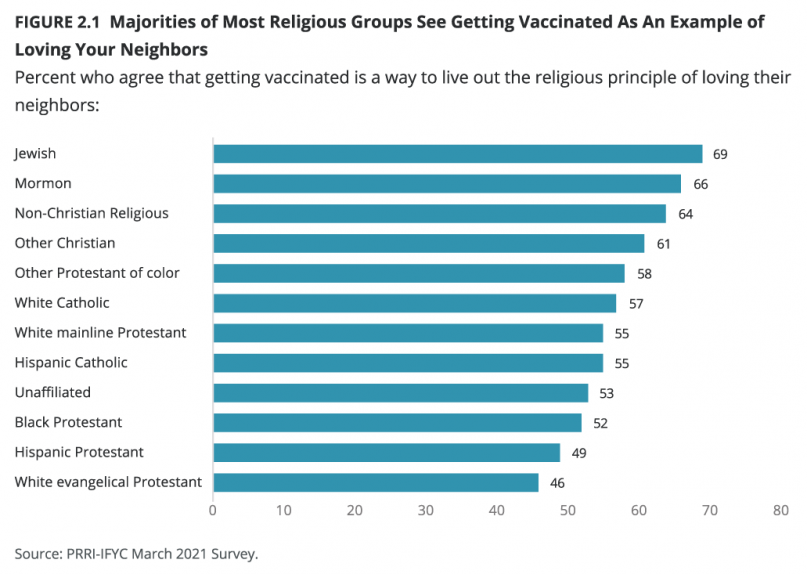 Third, Mormons ranked first in saying they could trust in the leaders of their religious community to do what is right.

Three-quarters said they could trust their religious leaders “almost all of the time” or “most of the time” (32% and 43%, respectively). As I’ve noted here before, the top leaders of The Church of Jesus Christ of Latter-day Saints have been proactive in taking COVID seriously from the very beginning.

They shut down churches and temples almost immediately and have been cautious about reopening.

They encouraged people around the world to wear masks as a way to prevent the spread of the disease. Elder Dale Renlund in December called masks “a sign of Christlike love,” telling church members they owed it to the vulnerable to wear masks for their protection.

Renlund also made it crystal-clear he was saying this in his role as a religious leader. “Today I speak to you not as a former physician,” he announced. “I speak to you as an Apostle of the Lord Jesus Christ.”

They also made a very public point of getting vaccinated in January, as soon as it was possible to do so.

And they issued a statement that made their pro-vaccination stance clear. “In word and deed, The Church of Jesus Christ of Latter-day Saints has supported vaccinations for generations. As a prominent component of our humanitarian efforts, the Church has funded, distributed and administered life-saving vaccines throughout the world. Vaccinations have helped curb or eliminate devastating communicable diseases, such as polio, diphtheria, tetanus, smallpox and measles. Vaccinations administered by competent medical professionals protect health and preserve life.”

They also recently issues a policy that people who want to serve a foreign mission need to get vaccinated. Anyone who refuses will be assigned to serve a mission in his or her home country.

So, by statement, example, photo op and policy, the church’s leaders have made it perfectly clear they want members to get vaccinated. And members’ responses to the PRRI questions suggest they generally trust their church leaders, and they agree getting vaccinated is what a loving religious person should do.

Yet half do not plan to actually get vaccinated.

There’s more. My fourth and final point is it’s not just that Mormons in general say they trust their leaders. A separate question asked respondents if they trusted their religious leaders to give them good information specifically about the COVID-19 vaccine.

Once again, Mormons came out at the very top of the heap, with the highest positive response of any religious group. 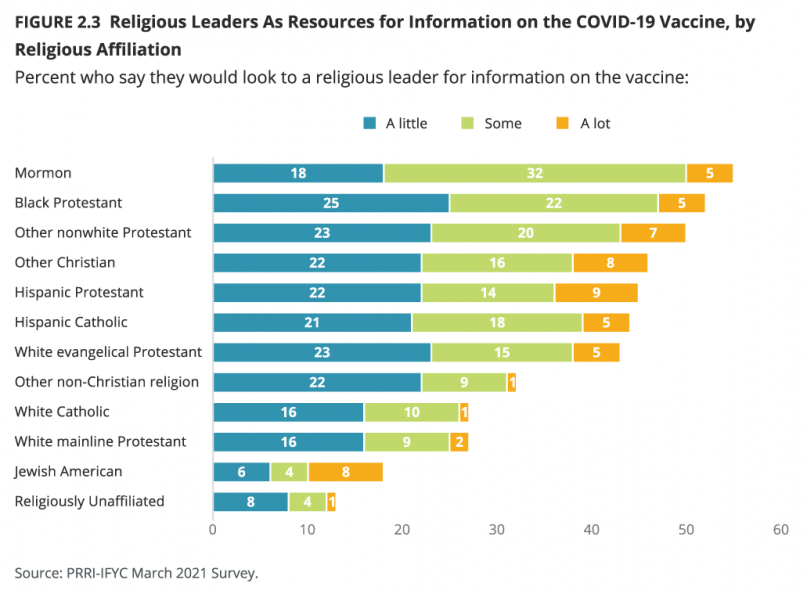 So, Mormons: What gives?

My take from this is that, as a colleague reminded me recently, we’ve reached a situation in the intersection of religion and American politics where politics trumps religion. When push comes to shove, people will now choose their cherished political beliefs over and against the teachings of their religion.

We’ve seen this for years with progressive Mormons who have sided with LGBTQ+ rights even when their church leaders repeatedly and unequivocally taught homosexuality and same-sex marriage were sins. Liberal Mormons have been inhabiting that dissonant space for a long time now.

What’s new and different here is that vaccine refusal is happening on the right, not the left. Overall in America, it is political conservatives who have been denying the reality of COVID and now are rejecting vaccinations at a much higher rate than political liberals. Vaccine hesitancy and refusal are particularly rampant among QAnon conspiracy theorists (who espouse views that nearly 1 in 5 U.S. Mormons regard sympathetically, according to PRRI).

In U.S. Mormonism, conservative members have long considered their politics a natural and godly extension of their religion. Being so clearly on the wrong side of the church is a new position for them.