No matter; for those of us of a certain age and a certain generation, he is eternally etched in our memories as the youthful assassin of Senator Robert F. Kennedy, shooting the then presidential candidate after his victory speech the night of the 1968 California Democratic primary.

A California parole panel has recommended Sirhan for parole. The matter still requires the approval of the full board, as well as that of the governor of California. Sirhan has, of course, aged. He has said that he is no longer the man who committed that horrific act of political violence.

There should be no parole for Sirhan Sirhan.

Because he is a convicted terrorist.

Sirhan Bishara Sirhan was a Christian Palestinian resident of Silwan, in East Jerusalem. He chose to kill Kennedy on June 5, 1968, because it coincided with the first anniversary of Israel’s stunning victory during the Six-Day War. Sirhan hated Kennedy because he had supported Israel; in fact, that was exactly what Sirhan said when he testified at his own trial.

Why is it important that there be no parole for the assassin of Robert Kennedy?

First: We cannot see that assassination simply as a one-off. Quite the contrary; it was part of a spring and summer crescendo of violence that still leaves its scars on the American moral landscape.

Theirs was a bond of unspeakable pain. Kerry Kennedy and Martin Luther King III both lost their fathers within months of each other. Both men were victims of assassins’ bullets. Both men died, in the words of the Hebrew poet Chayim Nachman Bialik, “before their time and before anyone’s time … (with) one more song to sing, but that song had been stilled forever.”

We often bemoan the gun-based violence in our country, as well we should. But in point of historical fact: No period in recent American history has seen the murders of two iconic figures, two months apart. It was followed by massive political violence at the Democratic National Convention in Chicago.

The assassination of Sen. Kennedy was not just a murder; it was part of a trend.

Second: One man’s hatred of Israel utterly redirected American political life and the story of the presidency.

Kennedy’s assassination eliminated the one Democratic candidate who arguably could have unified the party and invigorated it with a new sense of vision. It led to the nomination of Hubert Humphrey and, ultimately, to the victory of Richard Nixon.

Third: While all political assassinations are acts of terror, this one was of a particular variety. It was simultaneously anti-American and anti-Israel.

There are grisly parallels between Kennedy’s assassination and the terrorist attacks of 20 years ago on Sept. 11, 2001. In both cases, terrorism reared its ugly head on American soil, irrevocably changing the course of events in this country.

Note that I did not say “Islamic” terrorism; Sirhan Bishara Sirhan is a Palestinian Christian. The name Bishara is a common Arab Christian name; it means “flesh,” as in the flesh of Jesus of Nazareth.

Some of us still, 53 years after his assassination, wonder aloud: How would this nation have been different had Senator Kennedy lived?

The one who destroyed that dream does not deserve to walk among us as a free man. 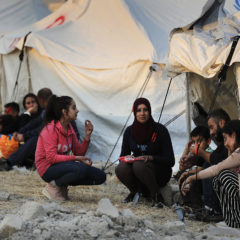 Opinion
Trump’s refugee cap compromises the US economy and American identity
Follow us on Facebook!
Submit your photos to RNS