The windows, which are expected to be installed in 2023, will be funded by a more than $1 million contribution from the Andrew W. Mellon Foundation.

“Kerry James Marshall, one of our nation’s greatest artists, has agreed to design the new windows for this cathedral that will be a richer and more fuller expression of the nation we want to be and the ideals that we strive for as a country,” said the cathedral’s dean, Randy Hollerith.

In a separate development, Hollerith also announced Mellon’s president, the poet Elizabeth Alexander, will contribute new verse to be inscribed in the stone around the windows. The poetry project is funded by actress Kate Capshaw and her husband, film director Steven Spielberg, through their Hearthland Foundation. 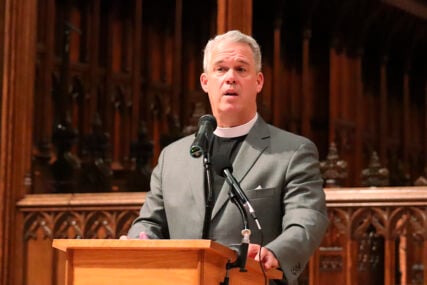 Hollerith said the committee advising the cathedral on the replacements said in its mission statement that they should artistically embody “both darkness and light, the pain of yesterday and the promise of tomorrow, and the quiet and exemplary dignity of the African American struggle for justice and equality.”

The new windows will be the first work in stained glass produced by Marshall, whom Kevin Eckstrom, chief communications officer for the cathedral, described as “one of the contemporary artistic scribes of Black life in America.”

Marshall, known mostly for his paintings of Black subjects, was given a solo exhibition at the National Gallery of Art in 2013, and in 2016 a  retrospective of his career opened  at the Museum of Contemporary Art in Chicago and later traveled to the Met Breuer in New York City.

The artist visited the cathedral for the first time this week. He examined the space now covered with plywood where his work will reside and surveyed the neo-Gothic structure’s more than 200 stained-glass windows.

He called fulfilling the committee’s mission “a monumental task” that will take contemplation and wrestling with history.

Just as he has worked with various art forms — from painting to sculpture to photography — Marshall said he comes to the cathedral project with exposure to a range of faiths. The Birmingham, Alabama, native attended Catholic school and a Baptist church before moving to California, where he spent time studying the Bible with Jehovah’s Witnesses, was baptized in a Church of Christ congregation, saw his mother become a Seventh-day Adventist, and worked for a time with the Nation of Islam.

“I’ve been around a lot of people doing a lot of different things with a lot of different perspectives,” he said. Embracing that complexity, he said, will be key to how he approaches his new assignment. “And I’ve found myself able to move fluidly and comfortably in all those environments.” 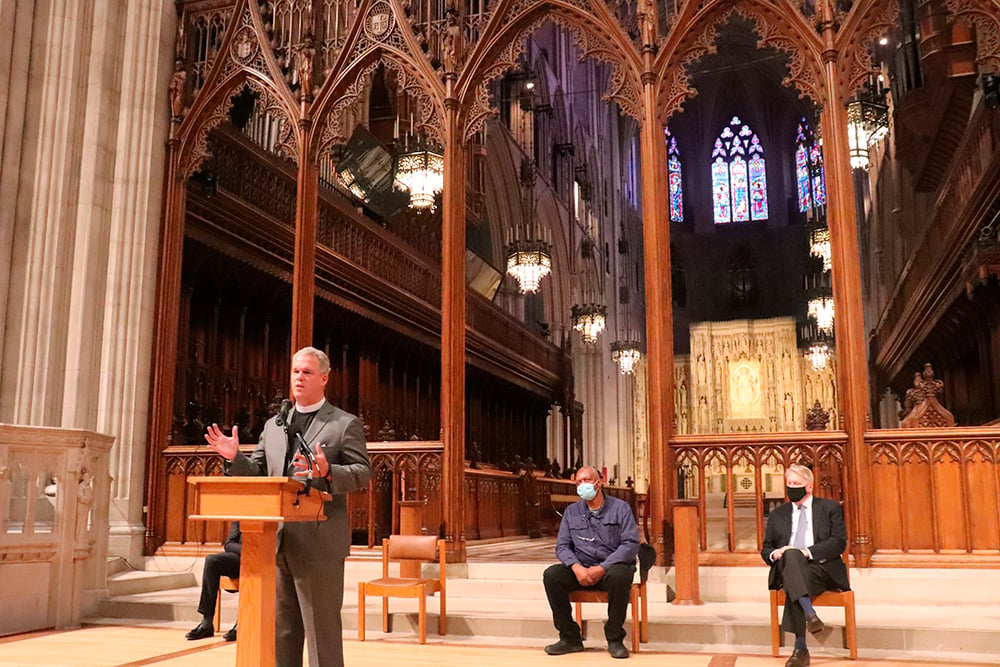 The Confederate-themed windows were added to the cathedral’s stained glass in 1953 with the support of the United Daughters of the Confederacy, a group that sought to honor the memory of veterans who fought for the South. The windows’ removal had been under consideration since the 2015 shooting of nine members of Mother Emanuel AME  Church in Charleston, South Carolina, but were taken down in the wake of a white supremacist rally in Charlottesville, Virginia, in 2017.

The Lee window has been loaned to the Smithsonian’s National Museum of African American History and Culture and will be featured in the exhibition “Make Good the Promises: Reconstruction and Its Legacies,” which is set to open on Friday. 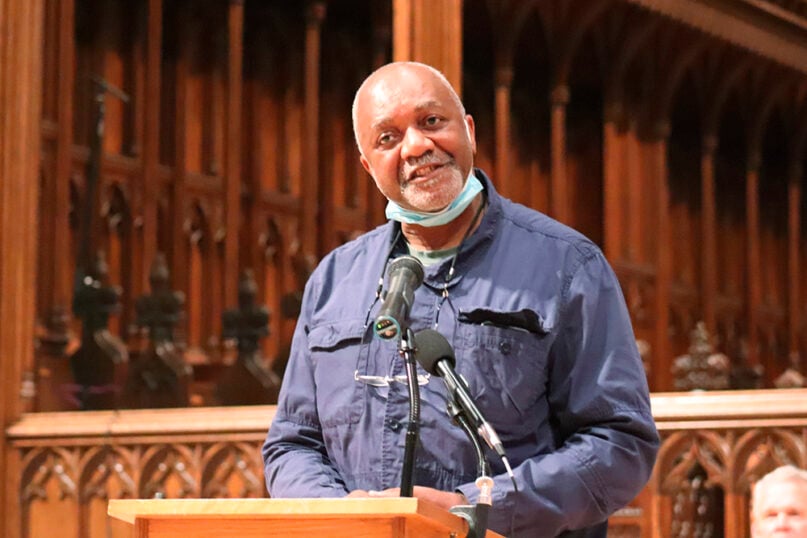 Artist Kerry James Marshall speaks at a news conference Sept. 23, 2021, about his plans to design stained-glass windows at the Washington National Cathedral that will replace ones that honored Confederate generals. RNS phioto by Adelle M. Banks

While several statues of Confederate officers have come down in recent years, Eckstrom pointed out the cathedral windows “will be one of the first Confederate icons that has come down and been replaced with something else.”

In August 2020, a United Methodist church in Boise, Idaho, known as the Cathedral of the Rockies, deconsecrated a stained-glass window featuring Lee. In its place the church will honor Bishop Leontine Kelly, the first African American woman bishop in the United Methodist Church, according to the Rev. Duane Anders, pastor of the church.

Anders said the window will emphasize Kelly but also highlight the historic election of the first Hispanic American bishop and the first Japanese American bishop. All three were consecrated in the church’s sanctuary in a 1984 ceremony.